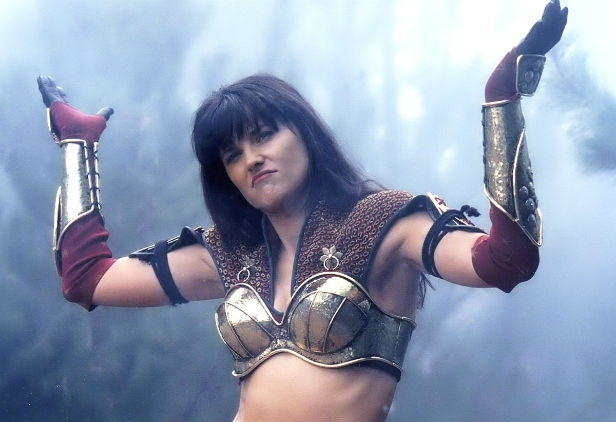 Right, there’s finally some clarification on the whole Xena: Warrior Princess reboot thing. Well, a bit. We now know that NBC are developing it, and that it definitely sounds like a reboot, not a revival.

THR quotes NBC Entertainment Chairman Bob Greenblatt as saying “Yes, we’re in the early stages of developing a new take on Xena and we’re looking for a writer. We want to do it.”

The important part of that sentence is “Yes.” So, confirmation.

However, fans may be concerned to hear that it’s definitely a reboot, not a continuation of the story, which means that Lucy Lawless may very well not be playing the title character.

“We’d love to have Lucy be a part of it — if we felt that her presence didn’t overshadow the direction we take with it,” Greenblatt said. “I’m not sure how she could be part of it if she wasn’t playing Xena, and I don’t know if that’s a direction we’ll ever go.”

That being said, THR reports that “he’d be open to having the actress — who is married to [Rob] Tapert — involved creatively behind the scenes.”

THR reports that the new Xena will be taking inspiration from a more current pop culture sensation. “…the new, modern Xena would have to have the charisma and charm of Lawless and the smarts of The Hunger Games‘ Katniss as producers are said to be looking for a sophisticated and smart superhero for a new generation.”

Sam Raimi and Tapert will be producing with NBC International. It is still very early days, but it seems to be clear that this is definitely something that the network is going to be moving on.

“I don’t think it’s just a continuation, but we haven’t gotten that far,” explains Greenblatt. “I think it’s a great character, and we should try to figure out how to revive it somehow.”

So, how do we feel about this. Lawless’ performance as the title character was truly iconic, and it seems kind of harsh to tease the idea of a new Xena series without her in the lead. If Bruce Campbell can get back into his old costume and continue having a brilliant time as Ash Williams in Ash Vs Evil Dead, then why can’t Lawless with Xena? This may potentially explain why the actress dismissed the revival talk as just rumours recently.

Anyway, THR reports that the new Xena is being looked at for a 2016 shoot.

You can buy Xena: Warrior Princess – The Ultimate Collection for £33.20 at Amazon.co.uk. Keep up with the latest genre news with the new issue of SciFiNow.