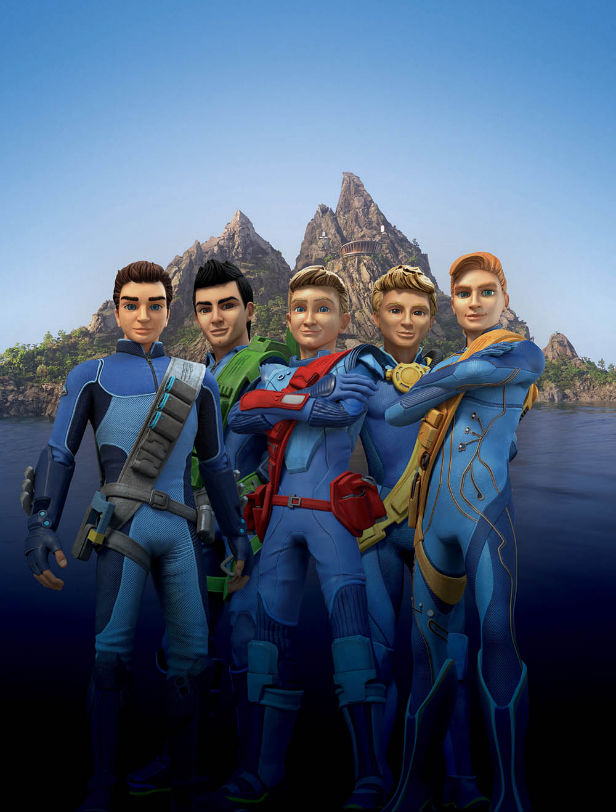 After a half-century hiatus, Thunderbirds Are Go!, a reboot of the late Gerry Anderson’s iconic British TV series, is heading back to our screens thanks to a unique collaboration between ITV Studios and New Zealand’s Pukeko Pictures.

This time, however, puppets on a string will no longer be the thing, with the five heroic Scott brothers being brought to life via computer animation, combined (in a homage to the original show) with live-action miniature model sets. The CG tweak in technique may antagonise die-hard fans, but some solace comes from the fact that they’re being pioneered by the Weta Workshop – the same Oscar-winning New Zealand-based post-production house responsible for bringing to life the worlds of The Lord Of The Rings, King Kong and Avatar.

“I must admit I have a bias against CGI, everything seams slightly unrealistic to me,” admits Shane Rimmer, the voice of the original Scott Tracy. “I’m sure it’s going to be popular, as it’s a good property, you’ve got a good director, and David Graham is in it again as Parker, so a lot of the ingredients are there.”

Indeed, the recasting of veteran voice actor Graham is a literal fan-throwback to vintage Thunderbirds, with the actor having provided both idiosyncratic cockney swagger to the role of Lady Penelope’s chauffeur/butler Parker and nerdish intellectualism as genius engineer Brains in the original series. But perhaps the biggest trump card was securing the seductive vowels of former Bond girl turned Oscar hopeful Rosamund Pike for the role of glamorous London agent Lady Penelope. “I think Gerry would have been pleased,” considers Rimmer. “She’s a very good actress, and has some real spirit in her!”

Rounding up the rest of the main cast is former Game Of Thrones actor Thomas Brodie-Sangster, who voices brothers Gordon and John Tracy; Kayvan Novak as Brains, and Andres Williams as menacing adversary the Hood. An additional female role will be newcomer Kayo, voiced by Merlin actress Angel Coulby.

While Rimmer won’t be returning as Scott Tracy (British actor Rasmus Hardiker will voice him and Alan), he says of the new direction, “I think they wanted a clean sheet, but they have Graham there to provide a little light relief, which he did in the original. I think that he’s the valuable asset for them.”

The main asset on the original Thunderbirds was no doubt creator and writer Gerry Anderson, who passed away in 2012. “He was probably one of the most productive men in international television,” remembers Rimmer, who also provided vocal work on subsequent marionette shows Captain Scarlet And The Mysterons and Joe 90. “He produced so many things – some worked, some didn’t – but he had a sense of what was going to work pretty well.”

Rob Hoegee, who wrote the Emmy award-winning animated series Ben 10, serves as head scribe, while Richard Taylor, who is the co-owner of Pukeko Pictures and Weta Workshop, is one of the executive producers.

“[They] know what they’re doing, and are well in place to do anything they want. They’re CGI, Gerry wasn’t. Gerry tried that with [a revamped] Captain Scarlet (2005) but I don’t think it turned out as well as he expected. It was the same story, same cast, same everything. The CGI didn’t find favour over here, but may be it will in America,” considers Rimmer.

Interestingly, Rimmer reveals that acclaimed filmmaker Christopher Nolan, a lifelong Thunderbirds fan, tried to get in on the cultural phenomenon, and later cast the actor as a water commissioner in Batman Begins after learning that his locations supervisor Ben Rimmer was related to him. “He asked my son over dinner, ‘You wouldn’t be related to a fella called Shane Rimmer, would you?’ Ben told him I was his father, and Nolan insisted, ‘He’s got to be in the picture!’ I think he always wanted to get involved with Thunderbirds and never really did, except for putting me in a role!”

Thunderbirds Are Go! will premiere on ITV in 2015. For the latest on your favourite new TV series, pick up the new issue of SciFiNow.