It was a sad day for horror fans yesterday, as legendary splatter filmmaker Herschell Gordon Lewis passed away at the age 87.

Born in Pittsburgh, Lewis was a professor of English literature at Mississippi State University before working in radio. After heading to Chicago to work in advertising, he made the jump to features and became an icon of low-budget independent genre filmmaking. After starting out with softcore nudie pictures, he began blazing a trail during the 1960s with such controversial movies as Blood Feast (1963), Two Thousand Maniacs! (1964) and She-Devils On Wheels (1968). He continued into the 1970s with The Wizard Of Gore and The Gore Gore Girls, before moving away from directing. 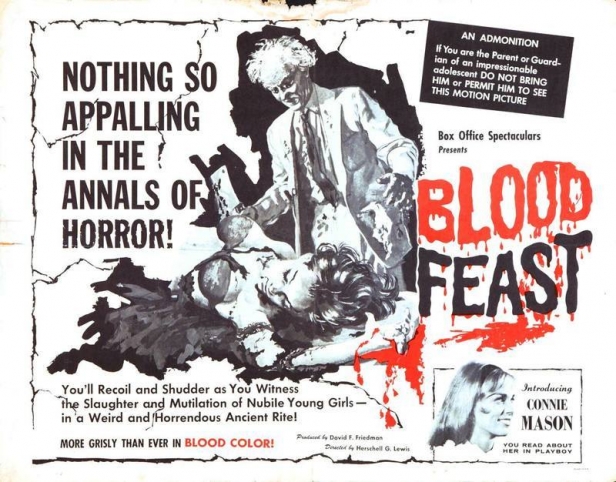 Lewis’ work was rarely acclaimed by critics. Blood Feast was reviled at the time, but would go on to be acknowledged as what is almost certainly the first splatter horror film. Later generations would find a wit and subversive edge to his gleeful presentation of gore and nudity, and there are many genre filmmakers who owe a huge debt to the down and dirty grindhouse thrills of these movies, whether it’s in terms of the sheer volume of blood, or the bloodymindedness of just getting your film made.

Two Thousand Maniacs! and Blood Feast have both received the remake treatment, but neither managed to really recapture what made a Lewis movie special. When you watch one of his films, there’s a real sense that you don’t know what’s going to happen. There’s no real cosy sense of nostalgia, instead there’s the feeling that you’re watching the work of a filmmaker who is operating with no constraints. This man could show you anything, and that’s exactly what he did.