Despite the huge amount of buzz surrounding Preacher, the TV series-length adaptation of Garth Ennis and Steve Dillon’s hugely popular comic-book series, there has been no word on an actual air date – until now. With the pilot episode due to screen at the SXSW festival in the US, the marketing campaign has kicked up a notch, with the official Preacher Twitter account posting the following message and image: 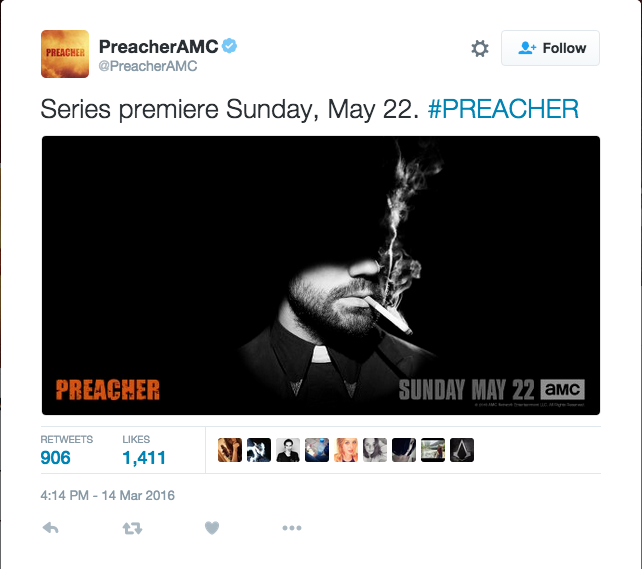 Yes, Preacher will start airing on 22 May on AMC in the US. There’s no word yet on exactly when we will see it in the UK, but since a channel has already been listed in the form of AMC Global, we can’t imagine that it will be too long. We’re holding out hope that this will be a next-day thing like The Walking Dead, although as a show it’s probably got a lot to prove before this comes to be the case.

For those of you who are unfamiliar, Preacher follows protagonist Jesse Custer, who sets out on a search for God after being endowed with divine powers, accompanied by his former lover Tulip O’Hare and motormouth Irish vampire Cassidy, all the while encountering and being trailed by a whole host of weird and wonderful characters. Adaptations have been mooted in the past involving the likes of Kevin Smith, Mark Steven Johnson and Sam Mendes without ever quite happening, but we couldn’t be happier that it’s finally hitting the small screen.

Preacher will air on AMC in the US on 22 May, and on AMC Global in the UK at a later date. For more news about the biggest TV series, pick up the latest issue of SciFiNow.