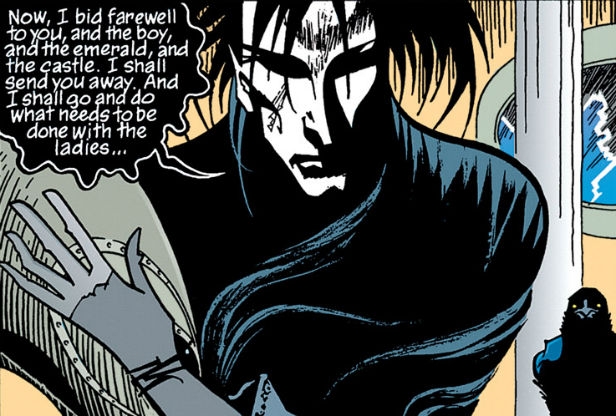 Joseph Gordon-Levitt has consistently expressed his desire to do right by Neil Gaiman’s The Sandman with the movie he’s developing, and in a Reddit AMA, the actor explained why he thinks that a film is the best way to go.

After all, The Sandman is such an epic, richly detailed comic book series that long-form storytelling would seem to make sense, if done right (it’s important to note that attempted film AND TV adaptations have fallen apart). However, Gordon-Levitt explained his choice.

“I think a big screen adaptation is a better idea and here’s why,” he wrote. “If you did the episodic version, I think it could very well end up as a not-as-good-version of what is already brilliant in the comics. But by reworking the material into a big movie, Gaiman’s brilliant characters and ideas get to take shape in a way they never have before. Also, I think Sandman deserves to look absolutely mind-blowingly awesome, just on a visual level, and as cinematic as some tv shows are becoming these days, they still can’t compete with big movies visually, just because they can’t afford to.”

He also addressed the fact that there’s just no way to fit absolutely everything in. “Yeah, there’s tons of little brilliant moments throughout the series, and we certainly can’t incorporate all of them. We are using a whole bunch of specifics straight from the comics, but of course, we’re also having to do a certain amount of invention, and in between that, there’s tons of re-appropriating, re-contextualizing, combining, consolidating, and all manner of things that literalists might not like. But what we try to be completely faithful about is the overall sentiment: that Dreams and Stories and Magic are actually all the same thing, and that they’re real, and that they’re powerful.”

It’s definitely encouraging to see how much care and attention is going into the film, and how long it’s taking to develop (we do not want a rushed Sandman movie, no sir), and although details getting lost are certainly concern, it would be madness to assume that any film adaptation could fit everything in.

The Sandman is still a long, long way off from making his big screen debut, so we’ll have to just wait and see for now.

You can buy Absolute Sandman Volume 1 for £75 at Amazon.co.uk. Keep up with the latest genre news with the new issue of SciFiNow.