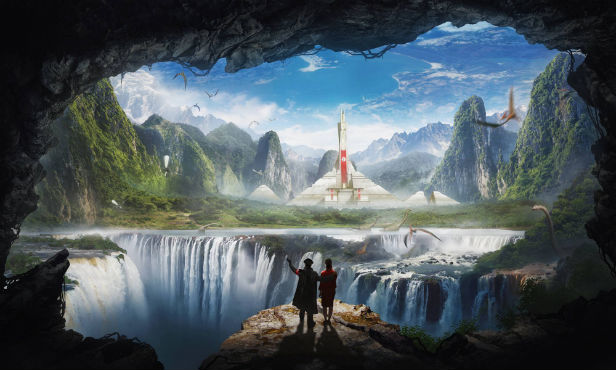 How can you possibly top the ingenious idea that the Nazis set up a secret base on the Moon, only to hatch a plan to enact revenge on the world 70 years later? How about Nazis on dinosaurs hiding beneath a post-nuclear Earth where the world leaders are reptilian?

That’s the equally bombastic concept behind the sequel to Finnish filmmaker Timo Vuorensola’s 2012 political satire hit Iron Sky – which will be sub-headed The Coming Race and has been described as “Iron Sky meets Indiana Jones on a safari in Jurassic Park.”

“It’s this David Icke reptilian new world order conspiracy theory that the whole of mankind has been controlled by these reptilian creatures from another planet and have infiltrated the whole society as we know it,” says Vuorensola. “We thought this was the most insane, batshit claim out there, but that’s what the Iron Sky world is like – take the craziest shit and then turn it into a story element.”

Impressively, Vuorensola has enlisted German company Pixomondo to create the visual effects. The FX maestros were behind the Oscar-winning special effects for Martin Scorsese’s Hugo, in addition to rendering the realistic dragons in Game Of Thrones. “For me, this is super important, because I’ve been a big fan of dinosaurs all my life, so I really wanted to have somebody on board who could create me a world of dinosaur action,” continues Vuorensola.

The Coming Race sees the return of Iron Sky cast members Julie Dietze and Udo Kier, while a host of newcomers will also be recruited. Capitalising on its established fanbase, a creatively collaborative crowd-funding campaign is once again being used to source funds for the sequel, while the director intends to inject new hope into the sci-fi genre.

“There’s nothing fresh coming from science fiction outside of small independent films, and
most science fiction is just mindless shit – like the latest Star Trek!” claims the director boldly.

“I hope Iron Sky is part of the new independent awakening of the more radical side of science fiction!”

Iron Sky: The Coming Race goes into production in summer 2015, and will be released in 2016. Keep up with the latest genre TV news in the most recent issue of SciFiNow.