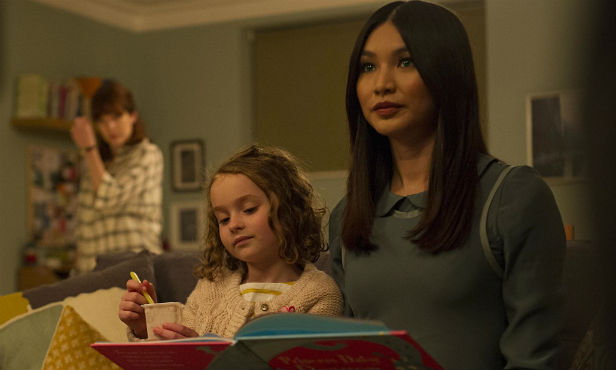 For Humans actress Gemma Chan, who plays house-robot Anita, Channel 4’s new series posed a whole host of difficulties that the ‘human’ cast didn’t have to deal with. Luckily, she had Synth School to teach her how to be a robot.

“These things are ultimately machines, and they run on battery power, so every movement has to have an economy and a grace to it. Just things like putting down a glass. We’d put it down and maybe not take the shortest route, whereas one of these things just putting down a glass would take the direct route and it would have to land perfectly because these things have perfect eye sight, there’d be no wobbling of the glass.”

She can switch into Synth mode eerily quickly, demonstrating moves in a way that immediately sets off alarm bells in your head, telling you that you’re looking at something not quite right.

Realism seems to be the key word for the show, despite all the robots. “I’d say it’s not traditional sci-fi,” Chan says. “It’s very real, it’s very grounded, there’s humour, there’s warmth, and there’s also elements of thriller in it… in the same way that something like The Walking Dead has zombies in it, but the zombies are the least of it. It’s about the struggle for existence really, and how people are getting along in this world… it’s very much about [the Synths] and how we’re getting on and what it means to be human.”

Humans is airing now on Sunday nights at 9pm on Channel 4. To read our behind-the scenes feature on the show, pick up issue 107 of SciFiNow.