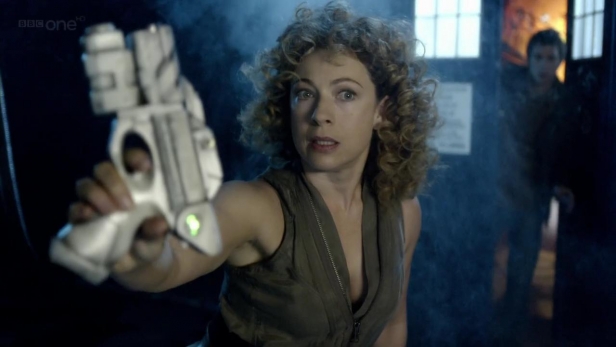 There will be a reunion in the TARDIS this Christmas as Alex Kingston returns to Doctor Who as Professor River Song for 2015’s seasonal special.

Having already acted with David Tennant and Matt Smith from Series 4-7 Part 1, this will be Kingston’s sixteenth outing on the show but the first time River comes face-to-face with Peter Capaldi’s version of the Doctor.

The episode, which is as yet untitled, begins filming this week, and is written by Steven Moffat and directed by Douglas Mackinnon. As always, it’s set to air on 25 December.

In a BBC Press release, Kingston said: “To be honest, I did not know whether River would ever return to the show, but here she is, back with the Doctor for the Christmas special. Steven Moffat is on glittering form, giving us an episode filled with humour and surprise guest castings. I met Peter for the first time at Monday’s read through, we had a laugh, and I am now excited and ready to start filming with him and the Doctor Who team. Christmas in September?, why not!”

Moffat added: “Another Christmas, another special for Doctor Who – and what could be more special than the return of Alex Kingston as Professor River Song. The last time the Doctor saw her she was a ghost. The first time he met her, she died. So how can he be seeing her again? As ever, with the most complicated relationship in the universe, it’s a matter of time…”

Doctor Who Series 9 premieres on 19 September on BBC One in the UK and BBC America in the US. Get an exclusive look behind the scenes of the show as well as interviews with the stars in the latest issue of SciFiNow.