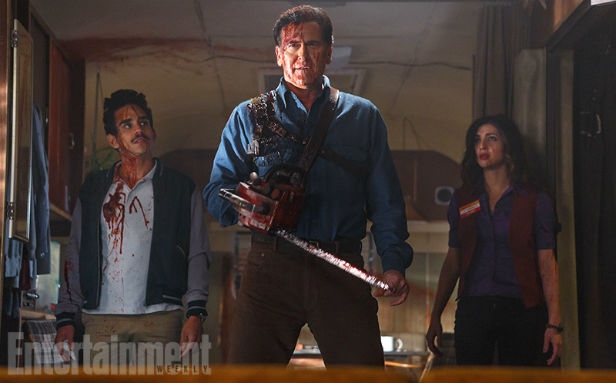 The first still from Starz’ Ash Vs Evil Dead TV series has arrived from EW.

It’s great to see Bruce Campbel back in character as Ash in his trademark outfit, complete with chainsaw hand accessory, alongside his new Deadite-fighting cohorts Pablo (Ray Santiago) and Kelly (Dana Delorenzo).

Campbell tells EW that Ash hasn’t really been up to much in the 22 years since Army Of Darkness. “He was perfectly happy doing basically nothing: telling lies about how he lost his hand in bars late at night. That was basically his MO. So, he’s not really the guy who should be dealing with this right now. But…he is. He’s our guy!”

“It’s The Searchers with carnage and mayhem,” he continues. “I’m relegated a little bit into the John Wayne mode these days with my team—the young, virile, evil fighters who will pair up with Ash and take on this nemesis: this never ending, ever evolving nemesis.”

However, Sam Raimi promises that Ash will still very much be the star of the show. “He’s the only one stupid enough to really tamper with those spirits. And he does. But he’s also still a really good monster fighter. So, he’s also going to be kicking some deadite buttocks, if you’ll pardon the French.”

Ash Vs Evil Dead airs on Starz this Autumn in the US. No UK broadcaster has been announced. Keep up with the latest genre news with the new issue of SciFiNow.