“It took me six weeks to read it,” Andrea Riseborough tells us. “I haven’t ever sat with anything for so long. At one point I even asked if people would help me read it because I couldn’t read it at night before bed.

“The thing is I just believe it, that’s the thing, as an actor that’s my job,” she continues. “To just believe what’s going on. So if I’m reading a script and I’m alone in my apartment at night shitting myself, I couldn’t go to the bathroom, I had to just stop reading it in the dark altogether. Then I got somebody else to read ahead so I would know what was coming! It was a really, really terrifying script and I’ve read horror scripts before, I’ve been offered a lot of horror in my time, and really Mandy and this have been the two things that I was really drawn to do, but it was really the most terrifying script I’ve ever read.”

It’s hard to imagine that anything could spook an actor as fearless as Riseborough to that extent, but then again this is The Grudge we’re talking about. There have been great Grudge movies and truly awful ones, but at the heart of Ju-On is something profoundly terrifying, a fear that can get under anyone’s skin. It’s relentless, unforgiving terror, a curse that is beautifully simple and absolutely unstoppable. As writer-director Nicolas Pesce puts it: “When someone dies in a horrible way it stains the house and if you set foot in that house you’re screwed and it comes with you wherever you go.”

There’s no reasoning with it, no sense of fairness, no escape. Whether you’re a good person or a bad person, if you go into that house, you’re done. It’s a story that spawned a sprawling franchise with multiple Japanese and American films, novels, comics and even a cross-over with The Ring. One thing that Pesce wants viewers to be very clear on, however, is that this film is not remaking anything. “I think a lot of people think that this movie is a remake of a remake, which it isn’t,” he stresses. “We haven’t remade any of the Grudge movies, this is a new chapter in the Grudge canon which is just showing you what’s happening in America while the Grudge that you know in Japan is happening. This is what’s happening over here and they’re not divorced from each other. This movie exists in the same world as the Japanese Grudge and that all plays into this.”

Indeed, Pesce saw the opportunity to open up the world of the mythology by relocating it. Given that there is a long-running central conceit and iconic spectres, it’s always been one of the more flexible horror franchises. “The Grudge is an anthology series,” he explains. “In the movies, especially in the Japanese ones, it’s different characters, different stories, different locations, different ghosts, and aside from the second and third American remakes it’s all been very contained to Japan but the cool thing about The Grudge is that it works like a virus. It’s super contagious so the fact that it would stay within the tiny city of Tokyo is unrealistic, it exists in Asia, in Europe, in Africa, in America because it’s spread.” 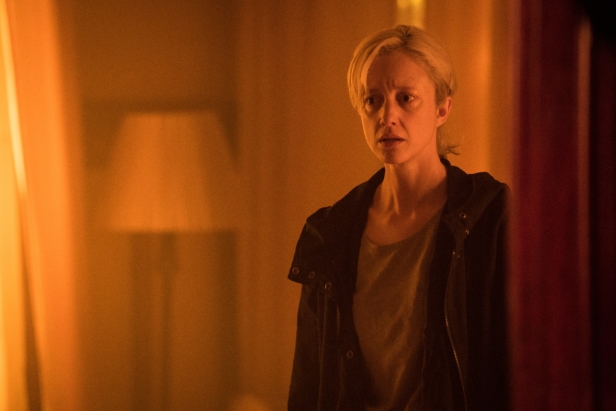 “It’s like this amoeba thing that’s moving through the world and I find that a very interesting metaphor for right now in general,” enthuses genre icon Lin Shaye, who continues her dominance of modern horror with a starring role that, from what we’ve seen, takes her to some pretty horrifying places.

“I think it’s about infection,” she continues. “I think we will all bring with it our own chagrin on some level over what’s going on. There are big political discussions to have here but politics feeds into humanity and I think that humanity is being damaged terribly. I think we’re becoming vicious again and that’s really upsetting and to me The Grudge represents some of that.”

While both actors clearly responded to the script, and the fears and themes explored therein, it’s clear that they were also drawn to work with Pesce. With just two films, the black and white chiller The Eyes Of My Mother and the delightfully horrid two-hander Piercing, he’s established himself as one of the most intriguing and stylish filmmakers working in the genre. Shaye compares him to Salvador Dali, “Because he takes familiar imagery and he juxtaposes it in a way that makes you see a new image,” she grins. “Also I think Nicolas could be a master. I think he has a sensibility and an understanding of both human elements and supernatural elements and evil that can turn things into something very special.”

“He’s very fluid, pragmatic, upbeat, totally focused on what he’s doing at all times and he runs a really, really smooth set…and he’s so young,” adds Riseborough, who leads the story as Detective Muldoon, called in to investigate the house and who “approaches all of that with a huge amount of cynicism, as you would.”

“It’s kind of amazing,” she continues. “He just really has his shit together, it’s phenomenal. But aside from all of that, he’s really a lovely guy, and what I’ve come to realise is the darker the movies I do, the nicer the people who make them which is a strange phenomenon! But I’ve recently done some really quite terrifying films and I don’t think I’ve ever worked with such nice people. It’s interesting, maybe it’s because it’s healthy to go to the darkest place you possibly can in your mind on a regular basis.”

In addition to Riseborough and Shaye, Pesce has assembled a truly exceptional cast: John Cho, Jacki Weaver, Betty Gilpin, Demián Bichir, Frankie Faison, William Sadler…these aren’t performers who’ll just show up for a bunch of jump scares. There’s real drama and tragedy lurking in this story, and Pesce was determined to keep everything as grounded as possible. “The very early Grudge films, the first Japanese ones, because of their production constraints and just making a low budget movie they’re very minimal and very contained but it resulted in a claustrophobia that works so well,” he explains. 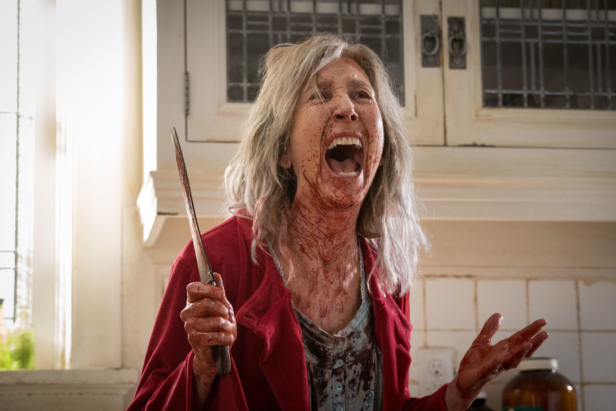 “I think that we start the film in a very, very grounded way, all the characters are dealing with very human struggles before any supernatural elements come into play and as the movie progresses we kind of devolve into a more horrifying world, and because the movie is so much about the characters’ psychology and dealing with what this curse is doing to them and making them think, you get to play with like a relative perspective of: once we’re at a certain place, who knows what realism is?”

“I do think one of the strengths of it is that there’s so much domesticity and it’s so pedestrian and it’s so relatable that it makes it more terrifying because you really can imagine being on that sofa,” adds Riseborough. “And he has a real flair for grit, Nic, he has a real flair for deep realism which is just a wonderful thing to bring to genre film. To me this was studying grief and I think you’ll see in the film you’ll understand why. But it also pivots from being a study in grief to going on a journey with somebody psychologically who is completely melting down. And this story played on some of my worst fears which is part of the reason why I wanted to do it.”

That kind of tragedy will be seen in Shaye’s character Faith Matheson. “She’s an older woman, she’s got dementia, and she’s struggling with remembering the past and hope for the future and within that there’s a wonderful scene between me and my husband, played by Frankie Faison, where we reminisce about the past, having a good day with my dementia and I’m able to remember,” she tells us. “So we’re remembering beautiful moments in summer together and it’s just very light-hearted, the love that we have for each other, and then you begin to see her first of all decline because of the dementia but then she becomes infected and how evil destroys all of it.” Both Shaye and Pesce are keen to allay fears about the illness being treated insensitively, with the latter explaining that “it’s a very, very different depiction than I think people naturally go to when you hear like ‘Oh, she’s got Alzheimer’s and she’s crazy.’ It’s not that and I think that for all the family drama aspects of this film it was about finding the human, heart-breaking side of it that feels as real as humanly possible so that when you do go into the supernatural it’s loaded with that truth as opposed to being exploitative.”

Finding that balance wasn’t the only high-wire act that Pesce had to perform while working on this story. Given that he is a filmmaker who makes such visually distinctive and tonally unexpected movies, we wondered how he’d fit into the world of a franchise. “You have to give the flavour that the fans want as much as you can without ruining what you’re trying to do,” he explains. “So there are definitely touchstones, so you see the hand in the hair and there are little elements that wink to the people that know and remember the old stuff. It is a different movie, it’s totally new stories and it’s a slightly different tone, but all the mechanics and all the rules…I’m like a Ju-On canon nerd, so I could tell you every location, every ghost, everything. So it was always that I wanted to stay true to the fan in me of what I like about it, not just rehashed.”

One thing’s for sure: he’s not going to be pulling any punches. Shaye has established herself as one of horror’s leading stars in recent years with the Insidious franchise, among others, and it’s hard to imagine that much could throw her at this point…

“The woman that’s playing the demon, I had met her like three seconds before and it’s the scene where she’s actually drooling into my mouth!” she laughs. “The physicality of what you’re doing helps create the character too. Your body doesn’t know you’re pretending. So the believability, I believe where I go and it’s sometimes very unsettling because there’s one scene in particular where it really did take me some time to regroup after. So there were some really gnarly [scenes], I can’t hardly watch!”

The Grudge is released on 24 January. Get all the latest horror news with every issue of SciFiNow.