Watching the trailer for Lawrie Brewster’s The Unkindness Of Ravens is a bit of an experience in itself. It’s an eye-popping few minutes that smashes folk horror, action, and extreme levels of gore to the extent that is truly impressive, and we absolutely can’t wait to see it at Horror Channel FrightFest. This trailer is EXTREMELY NSFW, so…be warned.

“Andrew Alburn, a homeless veteran suffering from PTSD, is plagued by flashbacks of a traumatic event he witnessed while serving in the armed forces. He retreats to the remote Scottish Highlands hoping to overcome his fear of Ravens, the dark creatures that populate his visions, but, in this bleak wilderness, his nightmares manifest into an enemy more powerful than he could ever have imagined. He must battle these monstrous entities as well as his inner demons to keep his life, and reclaim his sanity.”

With the FrightFest screening fast approaching, Brewster talked to us about what horror fans can expect from his film, his inspirations, his Kickstarter experience, and blending The Wicker Man and Hellraiser.

What would be your quick “Come and see this film!” pitch to the FrightFest audience?

Those who come to our première will bear witness to an unimaginable battle for survival as a broken ex-soldier passes through the very gates of hell. There he will mount a last stand against a nightmare nemesis of unrelenting cruelty and perversion in a horror-epic that combines the insanity of Apocalypse Now with the dread claustrophobia of The Evil Dead.

How did this film come about? Was it something that you and writer Sarah Daly had been working on for a while?

Me and Sarah are genuine collaborators on the creation of unique horror worlds and and strange antagonists. We express this passion for originality and our love of the horror genre through our production company Hex Media. Following our first film Lord Of Tears, featuring the Owlman, which was a classic Gothic style chiller, we wanted to explore a new path with The Unkindness of Ravens based around the idea of creating a gritty, violent and down to earth portrayal of psychological intensity and nightmarish cosmological horror. We took inspiration from a myriad of sources, from ancient Celtic and Norse mythology to the subversive era of 70s cinema reflected by films such as Don’t Look Now, The Wicker Man and Straw Dogs.

As part of the development for the film we envisaged an ambitious post-production schedule that would allow us to create this wider nightmare world that our hero finds himself in, which includes all manner of practical and traditional effects. So it is our most ambitious film to date and one that we have been working on for far too long. Now we’re just thrilled to have the opportunity to share it with our fellow fans of the genre!

It looks like there are quite a few horror elements swirling about in this movie: some quite heavy gore, some action, some folk horror and a lot more besides!  Had you always conceived it as this intense mix?

Me and Sarah are both enormously passionate about the folk horror sub genre and are eager proponents of it’s resurrection in modern horror. Because me and Sarah are from from Scotland and Ireland respectively, we have found great inspiration from the ancient Celtic culture of our nations which provides a rich resource of delicious Pagan horror which we like to combine with the esoteric and cosmological ideas of HP Lovecraft. We aim to make our films present to the audience a brief window into the limitless unknown – a brief flash of the nightmarish possibilities of our limitless universe.

As great fans of the horror genre, we’ve drawn some influences from other horror movies we love. Some of them might almost seem like contradictory influences too, for example the film has the claustrophobia of The Evil Dead, but the epic and nightmarish visceral quality of Hellraiser. But the film also has a serious drama side that might remind folks more of films like Kill List and Jacob’s Ladder. We also have a very hard edged pagan influence to the film that definitely will remind some people of The Wicker Man… basically imagine The Wicker Man and Hellraiser combined into some kind of heinous screaming beast and you’ll be about there.

Purely on a practical level, this movie looks hugely ambitious! What were the biggest challenges in terms of actually getting it made?

Oh, where to begin! I just remember that in pre-production I was a muscular Adonis of man gleaming before the sun but now, after years of production and post-production I am but a humble shell. A Kinder egg bereft of any toy! Some of the greatest challenges were also the most amusing in an albeit perverse manner, (like how Vincent Price might be amused in The Masque of the Red Death!) Which was the scenes that comprised of almost fifty naked extras wrapped in steel chains covered in blood, trudging along a freezing cold Scottish beach while clubbed and beaten by giant black armoured Raven headed warriors.

From organising ambitious scales of production to the careful patience required when working with crows (not the most cooperative of actors – though a little more affordable in the catering department.)

There is not enormous support in the industry for horror films that break from the standard commercial formula, so it was a challenge to finance our film and get it made. Thankfully we had the support of Sultan Saeed Al Darmaki of Dark Dunes Productions and the kindness and courage of all our fans and supporters at Kickstarter which made the life or death difference to our film getting completed. 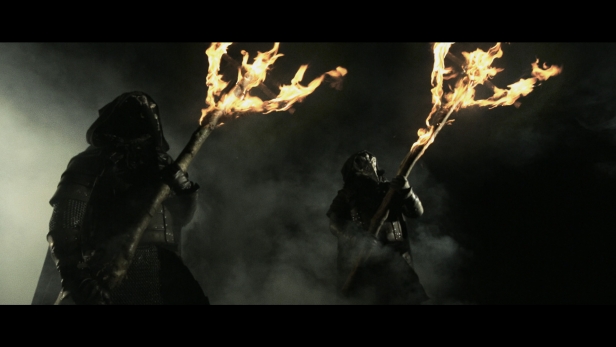 Andrew is obviously an unreliable narrator for the viewer. I imagine that’s a lot of fun to play with but is it also tricky in terms of keeping a grip on the story?

This is an interesting question because it calls not just the characters role as a narrator into question but that of the film-maker. For us it is an essential priority for a filmmaker to keep a grip on the story, especially with a psychological horror film which at times will present the audience with interesting questions as to the psychological or supernatural interpretations of the events which unfold for our character.

This is because if it does not retain that grounded sense of a story by the fire, then it becomes lost in its own abstraction. It is my sincere intention and hope that audiences who share a different interpretation of our film will leave satisfied that there is a well rounded story with a satisfying and epic finale that doesn’t leave audiences scouring around IMDb for clues on what the hell actually happened.

You’ve worked with Jamie Scott-Gordon before; did you always have him in your head as Andrew?

Yes, Jamie Scott-Gordon is an exceptionally gifted and passionate actor who cares very much for the characters he inhabits. While performing as a soldier suffering from PSTD, he worked with veterans to prepare and understand the condition they live with. Even going to the incredible lengths of sleeping homeless on the streets of Edinburgh like his character does, to truly experience the emotions and reactions of those often abandoned by society. I cannot think of many young actors like this and so, following his performance in Lord of Tears, I felt compelled to take his enthusiasm for method and characterisation further with our most intense character yet. 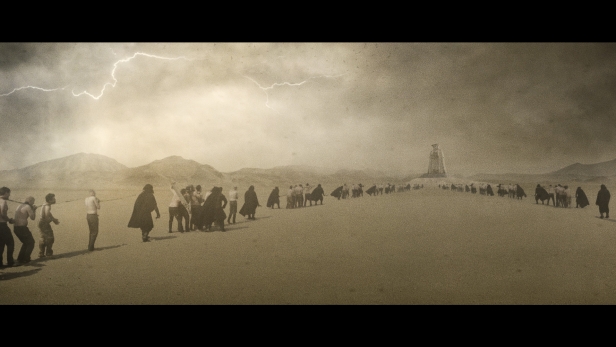 You did a Kickstarter to help fund post-production. How did you find that experience?

I believe the mainstream is becoming more and more narrow in the kinds of films it produces. To recoup their huge budgets they need to tell stories with mass appeal – and that’s fine – but it means that mainstream cinema no longer creates risky, original content. More than ever, it’s up to independents to tell those kinds of stories. Kickstarter allows niche audiences to decide what they want to see, and lets them help bring those projects to life. It’s an important source of funding for stranger, riskier films, and I think its success proves that audiences do feel starved of original content.

If it weren’t for places like Kickstarter, films like ours that don’t have big named actors or well-known branding would really struggle to get funded and produced. So, that’s a big reason. Also, we love the way that Kickstarter lets us connect more closely with our audience – you find a lot of kindred spirits who are hungry for the same kinds of stories as you are, and it really bolsters you through the often lonely and difficult process of making and marketing a movie to know that they’re on the journey with you, supporting what you’re trying to do.

How exciting is it to have The Unkindness Of Ravens ready to show the FrightFest audience?

Well, most of all it’s a massive honour because this is not just an ordinary audience but instead represent the greatest fans in the genre. That is folks who are so supportive and enthusiastic for the genre that they actually get out there to support independent film and great events which as any film festival owner can probably tell you – are bloody challenging and expensive to maintain.

So we are humbled that we have an opportunity to share our film with the fans just like us, and are eternally grateful to the programmers Ian Rattray, Paul McEvoy and Alan Jones for having enough faith in our film to present it at Frightfest. 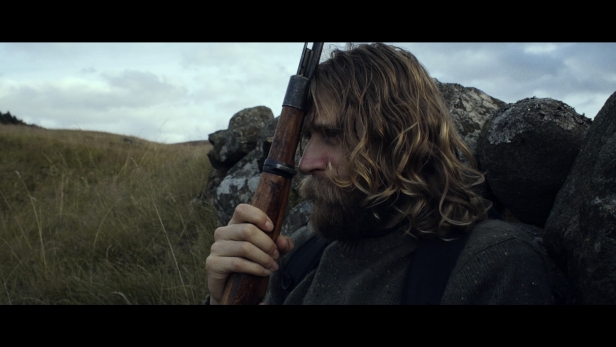 Well, we’re currently producing a slate of films in conjunction with Dark Dunes Productions. The next of these is Automata, which we’ve actually already shot and hope to finish some time next year. We’ll also be shooting two more films next year as well as working with other directors to produce an anthology of horror shorts. It is our ambition to make our Scottish company Hex Media into an independent horror studio, the ‘Hammer’ of the North, you could call it, and goodness knows we’ll appreciate any help out there to achieve that.

Do you remember what your first horror movie experience was?

Apart from trying to lose my virginity in a near empty cinema to a screening of In and Out starring Kevin Kline, I would have to say it was watching classic supernatural thrillers with my paranormal obsessed mother. Films such as The Innocents and The Haunting left a lingering impact that really brought home the terror of the mind and the unknown.

Finally, which horror movie do you love that you wish more people had seen?

Perhaps not technically a horror film but god knows it feels like one to me, Threads directed by Mick Jackson closely followed by Kairo directed by Kiyoshi Kurosawa.

The Unkindness Of Ravens plays at Horror Channel FrightFest on Saturday 27 August and you can find ticket information here.