One of the most talked about short films at this year’s FrightFest was Rob Savage’s Dawn Of The Deaf. An 11 minute film with three separate story strands, it’s a sensitive, wonderfully acted and attention-grabbing horror that, just like Savage’s earlier chilling short Absence, shows that he’s a filmmaker to watch.

We talked to Savage about the inspiration behind the film, the importance of using deaf actors for deaf characters, and what advice he has for filmmakers looking to make their first short.

Could you give us your quick elevator pitch for Dawn Of The Deaf?

Sure, it’s an apocalyptic sci-fi horror about a mysterious, possibly alien, sound that’s heard all across the world, immediately killing all the hearing population and leaving the deaf community to figure out what the fuck’s just happened, especially as the hearing population starts to reanimate as flesh-eating zombies.

How did this idea come about?

I’ve always wanted to do a zombie film, it’s been at the back of my mind forever, but it’s such a worn-out genre in lots of ways that it’s so hard to find something that gets you excited enough about it to go out and do it.

And actually I can’t take any credit for the idea, because this concept began as an elevator pitch that my friend Jed Shepherd, who’s a great horror writer and a record producer and a million other things, he pitched it to me when we were getting a drink, and immediately I knew that that was the zombie idea that I wanted to make. 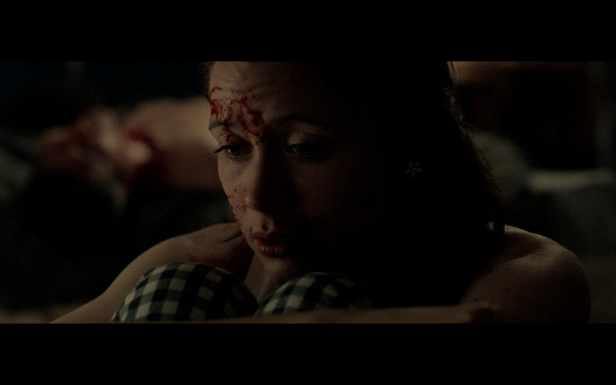 What was it about the idea that really appealed to you?

I guess for a hearing filmmaker to make a horror film with a deaf cast of characters, there’s so many opportunities there, because horror is so much about objectivity and subjectivity. When are you letting the audience in on something? Do you let them in before the characters know, do they know that the monster is around the corner or do they find out as it’s happening to the character, and there’s so much to play with when you’ve got deaf characters and you can really mine the horror.

And we kind of touch on that in the short film but in the feature version that we’re planning to make, that is something that we really want to push to its limit.

So you’re aiming to turn this into a feature-length film?

Yeah, the idea originally was to make a feature version. We hadn’t got a script together but we were shopping the idea around, and the initial response that we got was really positive, but there was this question mark from a lot of companies about whether hearing audiences would engage with a film of entirely deaf characters.

So we made the short film to show “Yes, and also probably more so.” Because you can really root them in the experience of those characters by using clever sound design and all the little tricks that we pulled in the short.

How important was it to you to use deaf actors in the film?

We actually used half and half, some of the actors are hearing and some of them are deaf. That’s the thing with short films; you can’t always make the film in the ideal conditions. Obviously there’s no substitute to using deaf actors in deaf roles and that’s what we’re committed to doing with the feature, but we had a funding opportunity to use a specific group of hearing actors so we took that funding opportunity as a means of making the short as a means of pitching the feature.

Which isn’t in any way to disparage the hearing actors, because they put in three months of prep and they really did give incredible performances.

It’s an ambitious short, there’s different storylines, locations, horror beats…What was the experience of putting it together like?

Because the concept came first as opposed to the actual narrative, we knew we were going to make it, we had the money and we had this little window of time that we had access to that fund, so me and the producer and Jed sat down and were like “What can we get for free, what can we get for cheap, where do our connections point?”

I do some work for the BFI, they have control of the BFI tunnels by the IMAX, so that’s where we shot our big steadicam shot. If we were to go through the proper channels and pay for that, that would have been our whole budget all at once.

So we went through it step by step and wrote the film around what we knew we had access to, what we thought we’d be able to pull together. We had to give the impression that the whole world had been infected by this virus, so we had to be pretty confident that we could get the numbers required to sell that and I think we ended up with 500 zombies in the end. 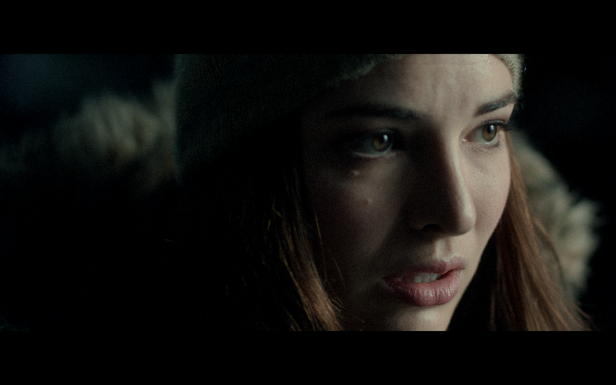 How was it working with the actors on their characters when you’ve got these three distinct storylines and arcs to work on?

Luckily we were able to balance it so we basically shot them as three short films, we shot them one after another but we weren’t jumping around between locations. So we wrapped each strand separately which helped, and especially with the hearing actors, because they had to take so much on in terms of learning their lines in BSL, we did a lot of rehearsals.

So by the time we got to set, we’d kind of had all those conversations and we knew what we were doing, and kind of treated them like three different short films. Which is nice because you can reset every two days. It was a six-day shoot, two days on each strand. So you get a little sense of completion and then you turn your mind to something else so it didn’t feel like we had too many balls in the air.

Does that practical approach come from experience?

It’s how I’ve always work, and it’s actually a bad habit because now I’m getting bigger and bigger budgets, and sometimes it can be quite restrictive thinking about money all the time, but for short films there’s just no other way of doing them really. If you want them to be impressive and have a sense of scale, you can’t write the script without budget in mind, it’s just not feasible. 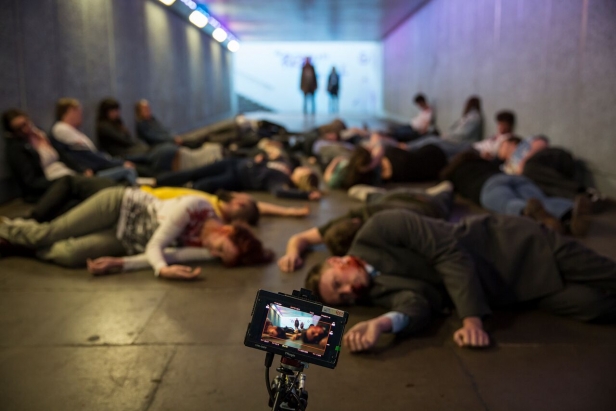 Both this and Absence have this quite raw emotional core to them. Is that something that you feel drawn to?

Definitely. I don’t exclusively make horror, my first feature was a kind of aimless mumblecore relationship drama,  but if there’s any through-line to the films that I make, it’s that they’re all character focused and that’s front and centre. So when these characters are thrown into horrifying situations you care about them, you’ve got to make sure you’ve put in the time initially.

What is it that you love about making short films?

I think it’s a tricky one because apart from film festivals, there’s not really a way of making money on shorts and there’s not really a home for them. If you’re lucky you get a short of the week premiere on Vimeo or something, there are means of getting them to an audience, but sometimes great films can get lost in the ether.

So in a way the best thing about short films is they allow you to prove yourself within different mediums, they allow you to showcase yourself. Before Absence I hadn’t made any horror movies but I really wanted to, so I used Absence and Dawn Of The Deaf as a means of showing what I could do, and off the back of that I got my monster movie Seaholme greenlit. I don’t think that would have happened if I hadn’t shown that I could pull off horror within the shorts. 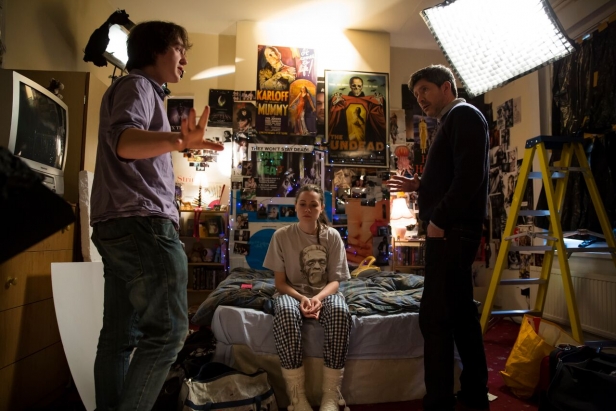 How do you find the experience of watching your films at a festival like FrightFest?

It’s great. It’s the nicest feeling in the world, especially with horror. Horror and comedy are the two genres where you feel in your gut if they’re working when you watch them with an audience. If it’s a think-y drama then it can take a lot of time to settle, but with Dawn Of The Deaf especially, when the horror hits about seven minutes in, you can feel the change in the room and that’s a really nice experience.

Can you tell us anything about your monster movie Seaholme?

That’s with the iFeatures scheme with the BBC, Creative England, and BFI. Hopefully, if we get the final production finance, we should be making that next year. And that’s like a fucked up British Amblin movie!

Have you always been drawn to horror?

Horror’s my genre. It started with Romero and Dawn Of The Dead and if I’m turning on Netflix, it’s the genre I’ll go to first. But I think with horror you need to have a really special idea. You see so many horror films that are just playing on familiar beats, that don’t really go anywhere and don’t really reignite interest in the genre, so I think you’ve got to find a really special idea if you want to go and make it, especially if it’s a feature and you’re going to put two years of your life into it. 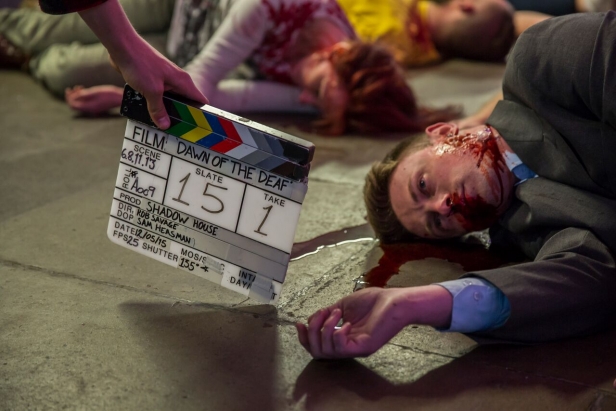 You mentioned Romero, do you have a favourite zombie movie?

It’s tough, I think that you can’t beat the original trilogy, but I wouldn’t want to put them in an order! But then I love some of the weirder ones like Living Dead At Manchester Morgue, and The Beyond is beautiful. I think it transcends just being a splatter movie and is genuinely a beautifully made movie. I think it’s Fulci’s best film. Pontypool is probably the best zombie movie of the last ten years.

Finally, do you have any advice for filmmakers looking to make their first short?

I think one of the benefits and also one of the drawbacks of making short films now is that it’s so easy, anyone can do it. You’ve got cameras on your phone that are better than the digital cameras we had five, 10 years ago.

Anyone can do it, but that has the effect of 100 people in a room all trying to get their voices heard, it just becomes a cacophony. So you need an idea that’s really striking and an approach that’s really striking, and it needs to be something that’s unique to you that only you can tell in that way. It’s making sure that you don’t contribute to the noise, you don’t just make something for the sake of it, because nine times out of 10 it won’t get the traction you need to go on and make your first feature, or bit of TV, or whatever the next stage is.

Also, just write for what you have access to. The Robert Rodriguez book Rebel Without A Crew was like my bible when I was making my first feature. There’s a passage in that which is like “I had a guitar case, a tortoise and a school bus.” And he was like “I can make a film from these three things,” and when you’re making a short film and you’ve got no money, you’ve got access to something cool like that that’s got production value, that should be the first place you go.

Dawn Of The Deaf will play at the London Film Festival, at Sitges, and at Fantastic Fest.