FrightFest-ers will recognise Kate Shenton as the filmmaker behind 2013’s fascinating skin suspension documentary On Tender Hooks. Now, she’s back with her debut fiction feature Egomaniac, a horror comedy about a filmmaker named Catherine Sweeney (Nic Lamont), who’s having some trouble getting her zombie romantic comedy made.

With financiers telling her she needs to put a talking dog in it, guys asking why a woman would be into horror, and creative control being wrestled away from her, Catherine is on the verge of doing something very bad…

Shenton spoke to us ahead of Egomaniac‘s world premiere at Horror Channel FrightFest about the origin of the film, the weirdness of basing a movie on personal experience, why the horror genre is a great place for women directors to make their first film, and being traumatised by Leatherface.

How would you pitch Egomaniac to the FrightFest crowd?

Egomaniac is a satire of the independent film industry, it’s a very, very dark comedy with a horror twist at the end, and in many ways it’s a semi-autobiographical account of my own experiences in the film industry, from the point when I did my last film On Tender Hooks to the point where I started writing Egomaniac. And some rather surreal and crazy things happened.

It isn’t a true story, it’s very much fictionalised, but it’s based on personal experiences and surreal situations. It’s about a filmmaker named Catherine Sweeney who is desperately trying to make a zombie romantic comedy but everyone tells her to put a talking dog in the film because then the film will make more money, and she gradually keeps compromising more and more and more until the consequences lead to quite deadly results.

Were you looking to make the jump into fiction features?

It basically started because I was trying to make a zombie horror romantic comedy for quite a while! And the experiences of trying to make that film led to some very interesting experiences. Egomaniac was kind of the result of, if I’m completely honest, me nearly giving up on filmmaking. I’d had quite a rough time, there had been a lot of crazy stuff happening, a lot of let-downs and disappointments and I was kind of verge of giving up. And then I thought, well, you know what, instead of giving up I’m going to write all this down and make it into a weird horror comedy.

So it was kind of like either start making Egomaniac or stop making films. I’m glad I made it now because it was honestly the best cathartic release and I think in many ways it is the ultimate female revenge film! [laughs] 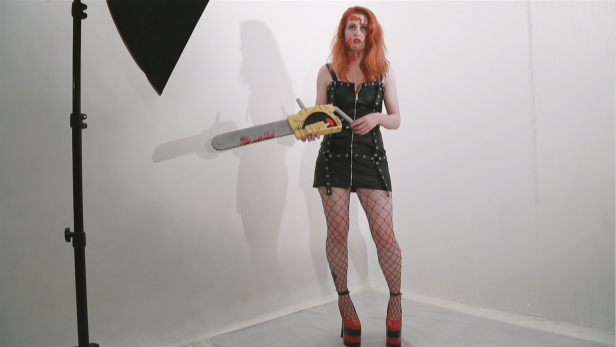 So this was easier than trying to put a zombie horror romantic comedy together?

Oh gosh yes, this was made on very, very, very, very low budget. It was a ridiculously low budget. It was personally financed, also some friends of family and friends put a little bit of money in as well, and it was written with the constant mindset of “No matter what happens, this film is going to get made.” I wrote the script with actors and crew already in mind, locations already in mind, just to make sure that it could go ahead and happen.

I think making a low budget feature film is one of the best ways to start because everything is now accessible. Not every film can be made on a no budget, you have to have an idea that really embraces being on a super low budget, and for me Egomaniac is a celebration of independent filmmaking, just going out there and doing it against all the odds. It’s one of the main messages of the film. If you’ve got an idea, don’t let anyone hold you back, just go out there and then make it.

Was it at all strange making a fictionalised account of your own experiences?

It is incredibly odd. The only character I really struggled writing was myself, and a lot of the character of Catherine Sweeney came more from the actress Nic Lamont than me. I wrote the most unsympathetic, horrible character ever and then Nic came in and added her own personality and her own charm to it and actually managed to make Catherine Sweeney a quite sympathetic character.

There’s also something quite liberating. I think generally you’re always going to write about your own experiences, and your own life in some weird crazy way is going to affect your work. This is just a little bit more direct than that because there are certain bits that are fictionalised and there are certain bits that are very close to the bone, but I also think that comedy is one of the best therapies out there and one of the best ways to solve issues.

It’s a very surreal thing and it takes a lot of self-reflection, but it is also a very cathartic thing, and for me it was like closing that chapter of my life and then I could just move on. 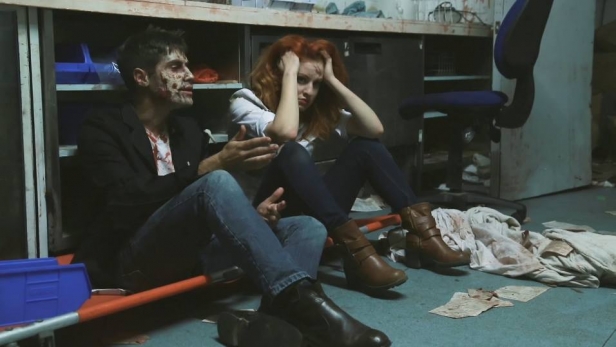 Catherine comes up against some pretty dreadful stereotypes about women in filmmaking. Do you think the situation is improving at all?

There’s a lot discussed in the film about being a female filmmaker and some of the things that you can get as a female filmmaker. I think things are improving drastically and quickly, but there are definitely certain things that you have to battle against, which can be very frustrating. It’s something that a lot of women have experienced and go through, particularly when you’re trying to take on the directing role. Even though more and more women are going into directing, it’s not the role in filmmaking that is the most female dominated.

I’m never going to tell people what’s fact and what’s fiction, but I will say that the weirder it gets, the closer to the bone it is! Some of the things that people say where you’re like “Really, would people say that?” Oh yeah! That has genuinely been said! All this started because I was genuinely asked to write a talking dog film! And that’s the only thing I’m going to say is true!

I think it’s improving. The problem usually lies with a handful of people, and most people are super supportive and super awesome and want to push things forward, but you do occasionally get people who may still have a particular stereotype in mind and that’s where it gets frustrating because on the whole most people are wonderful and supportive.

I think the fanbase in horror is absolutely incredible and one of the most supportive. I think it is one of the best genres to start in as a female director because it is so inclusive and people are really supportive and I think there’s a lot of support for female filmmakers at the moment. I think it’s a very exciting time to be a female genre filmmaker. 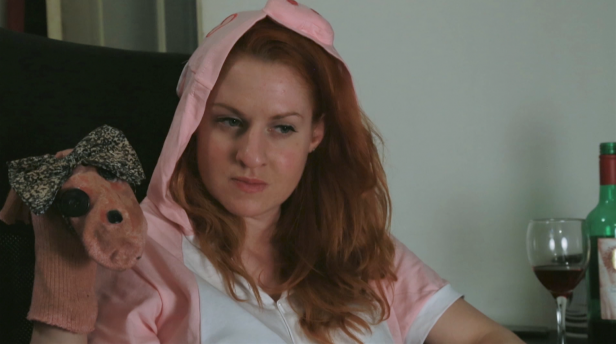 Did you ever consider making it a straight horror?

I’ve never made a straight horror film, I don’t think I could ever not have something comedic in, because I think they marry so beautifully together. It naturally fell into a comedy, because comedy is such a fun place to play around with those ideas.

And what about making a non-genre comedy about your experiences, with no horror at all?

No, because I really wanted to kill some people. [laughs] I really, really wanted some people to die at that time! To be honest, most of the film plays out as a comedy; it’s only at the end when things get stickier, but I think you needed the horror element. I think you needed that extra umph to it. Particularly as it’s a film about making horror films, so you’ve got to have a little bit of blood in there! Someone’s gotta die!

Was the experience of making On Tender Hooks helpful for this movie, or was it just a completely different experience?

They were so different. On Tender Hooks was just me, a camera, my 13 inch Macbook Pro and shotgun mic. A few people came in in editing, like my sound designer James Hyde, who has done all the sound design for everything I’ve done and is just an absolute super legend. When you’re doing fiction you have a whole team involved. On Tender Hooks was was a documentary that could never really be planned; you just had to go with the flow. With something that’s fiction, it’s all about preparation, it’s all about planning.

So they’re very different filming processes. But you always want to push forward and make something different because that’s how you keep challenging yourself to improve and become better. I think there’s nothing worse than when directors are making the same film over and over again, you want to keep pushing yourself forward and doing something a little bit different. 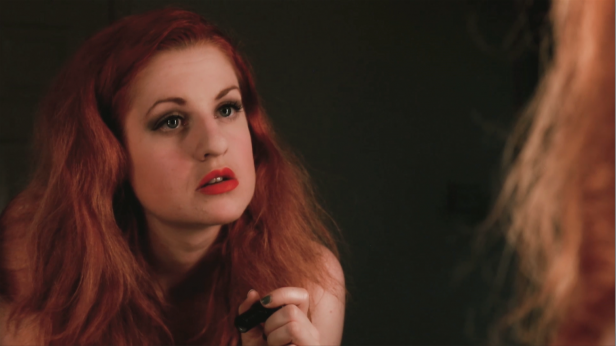 Would you consider going back to documentaries?

I would love to do a documentary again but I would have to find something that got me as excited and as fascinated as human suspension. I would say at heart I’m a fiction filmmaker and I started out doing fiction shorts, and then I was lucky enough to fall into the suspension community and just become completely fascinated, so I thought “I’ve got to film this.” After On Tender Hooks people were like, “Oh, make more body mod documentaries, make more documentaries like this,” and that’s not really where I want to go.

I am definitely up for doing a documentary in the future but it would have to be the right subject matter and I would want it to happen like On Tender Hooks where you fall in with this group of people and find this world that you become fascinated and engrossed in. Until then I’ll be sticking with fiction for the moment.

Do you have something lined up next?

Yes! I’m making my next feature film, which is called Bloody Burrito, which we should hopefully be shooting next year, which is very exciting. And all I’m going to say is: lesbian cannibals in a Mexican restaurant. But I’m super excited, I’m working with production company Breakneck Films who are really lovely, and we’ve got an awesome creative crew lined up and it’s shaping up to be something really exciting. So I’m really, really excited but I’m not allowed to say too much.

Finally, do you remember what your first experience of the horror genre was?

There’s two that have defining points. The first that really got me understanding the power of horror films was when I was 14 and watched The Texas Chainsaw Massacre. I was genuinely traumatised, so much that I had insomnia for two years and…I lived in the middle of nowhere in the countryside and I have an over active imagination, I genuinely thought Leatherface was going to come and kill for me for about two years! A bit insane, I was a really weird kid! And I’m now an even weirder adult!

So I kind of avoided the genre for a really long time but the film that got me into horror films was when I watched 28 Days Later and I realised how powerful horror could be. That horror films could convey an important message, that it isn’t just people running around in their underwear and then getting stabbed, you can have very intelligent profound horror films and that horror is a medium that you can really nail a point. And I think horror and comedy are the two genres where you can really get a point across, where you can really express an important thing that needs to be expressed.

Egomaniac is playing at Horror Channel FrightFest at 3:55pm on 28 August and you can find ticket information here. Keep up with the latest genre news with the new issue of SciFiNow.