Annie Clark, better known as the most awesome St Vincent, has made her directorial debut with all-women horror anthology XX and it is just as sharp, stylish and witty as you might expect.

While the shorts from her fellow directors (including Karyn Kusama, Jovanka Vuckovic, Roxanne Benjamin and Sofia Carrillo) all fit neatly into the horror category, Clark’s is a pitch-black comedy about a woman (the brilliant Melanie Lynskey) struggling to conceal her husband’s corpse as their young daughter’s birthday party gets underway.

We had the chance to talk to Clark about how she got involved with XX, how making films compares to making music, and why you need to be careful when citing David Lynch as an inspiration…

What was the experience like of watching XX with the Sundance audience for the first time?

As [co-writer/producer] Roxanne Benjamin and I were halfway through the writing of it, we realised that it was not in fact a horror film. It was definitely a comedy. There were a number of parts in the film that while editing and sound designing it would make me just cackle with laughter. So it was an immense relief to be in the theatre with people at Sundance in the full theatre and have other people laughing at the parts that I thought were very funny! That made me feel like I was not the worst person on the planet.

Was it Roxanne who first approached you about the film?

No, Roxanne and I were paired up by Todd Brown, the producer. He asked me if I would like to be involved and my general ethos in life is to “absolutely” to things that I’m not sure that I can do, and that I’m afraid of. So this fit neatly into that category.

Had you been thinking about making the jump to directing for a while?

The truth is no, because I always thought that somehow being a performer meant that maybe the most natural progression into film would be acting. But what I realised in the making of this was that actually what I much prefer is power, and the people who have the power are the directors and the writers. That’s the side I prefer to be on.

It must have been a pretty exciting project to get on board with!

The truth of the matter is I’m way too squeamish to watch horror films so I’m not as much of a horror buff as one would think, having been involved in a horror anthology. But I liked all the other directors involved and I mean, frankly, if someone is going to say “Hey, here’s a sum of money, go make something with it, and you don’t have to pay it back!” That’s so rare in the music industry! That’s so deeply, deeply rare! You usually have to basically take a bad loan and pay it back with your firstborn.

So I was just like “Really? What’s the catch?” And there wasn’t a catch, so I just ran with it and I had the best time ever, I loved it so much.

Is there any comparison between sitting down to write a song and getting to work on a screenplay, or do they require completely different approaches?

Luckily I had a really great collaborator in Roxanne Benjamin who showed me how to make the house three-dimensional. That’s what you have to do with a story. Things that came naturally to me were how I wanted it to look and, because I’m a songwriter and oftentimes have to come up with words that paint a particular picture that means something more than the picture that they’re painting, that part of it, in terms of envisioning actions that people could do that could mean more than just what they seemed. I feel like that also came naturally to me.

But the form was an entirely different matter. This film is very narrative-driven, it’s plot point to plot point, it’s cause and effect, a game of mouse trap. But in music it’s a lot more amorphous a lot of times or the narrative doesn’t have to be so literal. So that was an interesting challenge.

In terms of collaboration and marshalling people, I imagine there’s some similarities?

Yes, I got the hang of that on set, finally. Ultimately some of our favourite artists’ greatest skill isn’t necessarily being able to execute everything themselves. Their greatest skill is having the vision to put certain people in a room at that time, and you filter people’s ideas through your specific vision, but let very talented people excel.

So that was very similar in terms of collaboration and creating a team, managing a team. Basically, directing is making decisions. You sometimes make them partially based on a whole lot of research and intent in terms of who these characters are and what the scene is, but you also rely a lot on instinct.

So those two things are very transferable. I make decisions every day making records, that’s all it is! All it is making decisions and I think that takes a while for some people to hone, to have the confidence to say “This and not that. That and not this.” That’s all it is. 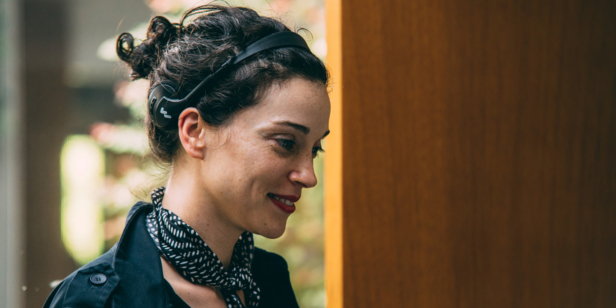 Where did the idea for ‘The Birthday Party’ come from?

It was based on a true story. A friend told me about someone waking up in a house with a dead body and having to make very split second decisions on how to best protect the children. And I think any good, interesting art has high stakes, so we just set it up so poor, sweet Mary has very high stakes from the very beginning and we watch her succeed and fail on the edge of our seats.

You mentioned that you knew how you wanted it to look early on, was there a particular inspiration?

Well, I was very influenced by a magazine called Toilet Paper, and there was a shot in it that I’d seen that just completely haunted me. It’s a scene of this very immaculate, Memphis-style living room and two feet sticking out from under the rug. And I thought “OK, I have to combine this story of finding the dead body in the house with eventually getting a shot that riffs on that.”

I called it the Magna Carta shot, there are certain things that you point to in any creative project and go “This is the DNA of it. This is the visual bible, this is the sonic bible of what this is,” and you make those decisions very early on and follow through with them. But I knew that we had to get to a place plot-wise where we could more or less replicate that shot of an immaculate living room and two feet sticking out! In this case it was a blanket and Mary is hiding behind a couch hiding from her nosy neighbour covering up her dead husband with a blanket, but the idea remained the same.

She was absolute perfection. She brought the exact right tone to the piece, to give it real heart and real emotion and she was the real heart and soul of the entire piece because you can’t have everything be absurd. She grounds it in real emotion and therefore it allowed the setting and the colours and the plot and everything, it allowed that to be the humorous part and she was just this deeply sympathetic beating heart.

Once you realised it was a comedy, did the rest of the short come together fairly quickly?

Once we embraced the absurdity, then yes, it certainly made other decisions more obvious. And not even necessarily things while we were shooting but after the fact, things like the sound design of the piece, really playing up the jump scares! I can’t tell you, there was so much fun and so much laughter in the making of this movie.

We were playing it for laughs, we were playing it for jump scares and we were just having fun, and being an artist in another medium for a living, I love what I do so much, but there is a certain naiveté that I’m able to bring to this other art form that I don’t know very well, frankly, and a certain levity that I so enjoyed and was able to bring back, I could bring that naiveté and sense of humour and enthusiasm to my primary medium of music.

Did you have any idea what the other directors were working on?

I didn’t know! We got sent a link early on of, I believe, rough cuts of Jovanka’s and Karyn’s but I didn’t watch them, not because I wasn’t curious but because I didn’t want it to influence what I did. So I really only saw the whole thing when it premiered at Sundance in a room full of people.

Were there any filmmakers that you were particularly inspired by?

I feel like David Lynch is always mentioned by everyone but unfortunately, as my friend pointed out recently, most of the time when people cite David Lynch as their first influence, their films are not good! So David Lynch is amazing but maybe don’t throw that out as the first thing!

No, I love Michael Haneke, Lynne Ramsay, Claire Denis, I loved Elle, the Paul Verhoeven movie, I loved that so much. It’s the best thing I’ve ever seen in my life. I love early Todd Solondz, I was thinking that in some ways the brutality of this humour, we maybe slightly shared a bit of a world with his. I love Peter Greenaway, Fassbinder films.

Do you think you’ll come back to directing, maybe a feature?

Yes. I’m working on all of that currently. I’m so thrilled. I was able to take this experience and transfer all of that information and enthusiasm into every other aspect of my life and I can’t wait to do this again. It’s just thrilling.

Finally, is the title ‘The Birthday Party’ another Nick Cave reference?

Yeah! It is! I’m determined to have a Nick Cave reference in every medium that I try!

In that case, what would be your desert island Nick Cave album?

XX will have a one-night-only theatrical event with a filmmaker Skype Q&A thanks to The Final Girls on 3 May and you can find information here. XX is released on DVD on 8 May. You can also read our interviews with Karyn Kusama and Jovanka Vuckovic. Keep up with the latest genre news with the new issue of SciFiNow.