Valdimar Jóhannsson’s visually striking debut feature Lamb was awarded the ‘Prize of Originality’ at Cannes Film Festival 2021, and it is Iceland’s official entry in the Best International Feature Film category at the 2022 Academy Awards.

This daring horror and folktale hybrid stars Noomi Rapace as Maria, a sheep-farmer who is gifted with a new lease of life when a strange creature is birthed on the isolated farm which she runs with her husband Ingvar (Hilmir Snær Guðnason).

At the London Film Festival 2021 we spoke with director Jóhannsson and actor, Rapace, about the film’s themes of grief and the power of mother nature.

Can you tell us about the various Icelandic folktales that you drew inspiration from for Lamb?

VJ: It was not a specific story, because Ada is something that we came up with. It is more for instance, on Christmas night in Iceland in folktales usually something strange happens at Christmas. So we took a small element from that. We are both fans of mythical stories. Ada was just something I started drawing, it’s probably more from spending so much time with lambs. Lambs are amazing creatures.

NR: Iceland has millions of lambs and 350,000 in population, so humans are the minority.

VJ: What is strange is that I feel like people talk about sheep like they are stupid, and I think that’s not right because they are clever animals. In Iceland we have a book that is written about sheep that have saved many lives. There’s a special breed that know when there is bad weather coming. They have a lot of talent. 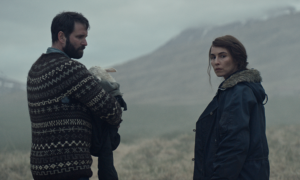 Talk us through the logistics of shooting with a creation such as Ada. How did that all work?

NR: We started with puppets and then we shot we real lambs and real babies. So the scene where I’m dancing with Ada, we would do me holding a real lamb, wrapped up in a blanket, so I needed to keep her legs really firm, and then we switched to a real baby with the same blanket around them. We would shoot one version with the lamb and then one with the baby.

It’s quite an emotional role, so when shooting did you find yourself more connected to the baby or the lamb?

NR: I do think I felt more connected with the lambs. In one scene, with the flower crown, the connection was amazing. She just became so still and her face was really close to me and we started breathing together, it was this really magical, eerie, intimate moment. And he didn’t say cut! We were rolling for about ten minutes. It felt like forever. Time stood still. She really took me in, it was this strange moment of a deep connection.

NR: I grew up on a farm and we had lots of different animals. It was a small farm, but we had lambs. Lambing season in Sweden would be April and May, and there were always a few lambs that the mother sheep would push away, and me and my sister would feed them so they would follow us everywhere. Then in September it was slaughter time. That was the circle of farm-life. We ate meat. For Christmas you would have lamb soup or lamb shank. It became very normal that you are very close to the animal and then when the time comes you just have to say goodbye. Because I was a child, you don’t really reflect that much on it, it’s just the way it is. It’s the same for Valdimar. 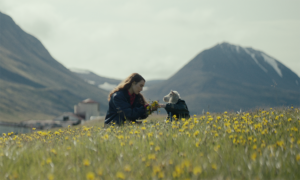 The isolated farm where you filmed is so eerie, especially as it makes you think so much about the film’s timeless theme of the power of nature.

VJ: Nature was almost a character in the film. This location, we were very lucky to find it. We had been looking for it for many years. I had been drawing the farm, and made it also out of clay, and I was sending photos to farmers to see if they had a farm like this. When we found this farm, we realised we could shoot 360 degrees out of every window. The mountains looked amazing.

NR: It’s also a place where time doesn’t exist. We shot in the middle of summer, and at the beginning of summer in Iceland it never gets dark, so we’re shooting in the middle of the night. It could be two in the morning or two in the afternoon, so you move into this strange haze of ‘what is real?’ Or ‘what is imaginary?’ It’s eerie.

Was the way the film approached the subject of grief from a unique angle what initially attracted you to the role?

NR: It gives you an opportunity to talk about grief and explore grief from a different angle. What is grief? Everyone reacts differently, and there’s no right or wrong. There are many ways to see this film but after you watch it, you could see it as a symbol for a new chance or a possibility to heal. It’s like soul medicine. Maria is in that part of grief, that compact space, where you shut down your emotions because it’s too much to handle. It’s almost like a cramp inside. Then Ada comes and she’s alive. I feel like grief is deeply personal, it’s a dark hole and it’s really hard to get out of it. With Ada as a symbol it allows us to put a body to it.

Lamb is in cinemas in the UK and Ireland on 10 December 2021. Read our review here.

Crawl’s Alexandre Aja and Kaya Scodelario: “Nature is fighting back, and the creatures are also coming”

Director Johannes Roberts on Resident Evil: Welcome To Racoon City: ‘I’m amazed how gory we were allowed to go with it’.
< Previous
Next >

Crawl’s Alexandre Aja and Kaya Scodelario: “Nature is fighting back, and the creatures are also coming”

Director Johannes Roberts on Resident Evil: Welcome To Racoon City: ‘I’m amazed how gory we were allowed to go with it’.