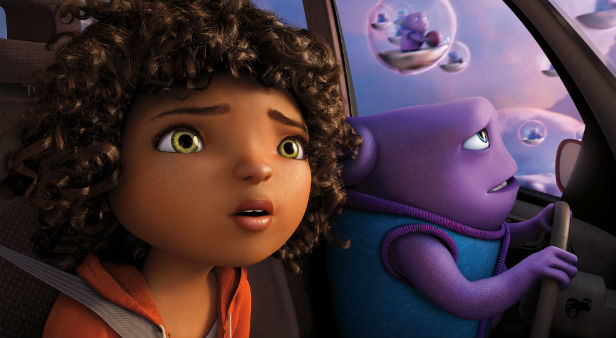 New animated film Home is about the team-up between adorable alien invader Oh and Tip, a young woman searching for her lost mother. The film stars The Big Bang Theory’s Jim Parsons and singer Rihanna. We caught up with producer Suzanne Buirgy to talk about the ideas behind the film.

What was it about the story that resonated with you?

I read the book first (‘The True Meaning of Smekday’, Adam Rex), which was just lovely and kind of eccentric. I loved the story because it had these emotional characters, humour and a cool message about stepping into someone else’s shoes and understanding things from their perspective. It was a universal message to me.

How important was it to you to stay true to the spirit of the book?

We read the book and let it sink in. We brought Adam in on the process a few times and he wrote extra lines and notes, and there are moments that are verbatim from the book. We wanted Adam to be pleased, which I think he is. But it does veer from the book and I don’t think we wanted to be too precious about sticking to it exactly.

Do any of the characters remind you of yourself?

Both Tip and Oh. There’s something about Oh. He walks through the world like Pollyanna and sometimes I’m a little overly optimistic. Then again, I can be fairly scrappy and I’ve been on my own since I was 16 years old so I understand what it is to be a survivalist. The combination of the two resonate with me personally.

As well as playing Tip, Rihanna curated the soundtrack. What do you think that brought to the film?

She (Rihanna) wanted to keep it very separate from the character. But the music is unusual for an animated film – it’s a bit unexpected. And scoring Jennifer (Lopez) for the song ‘Feel the Light’ was such a joy. She did such a beautiful job singing it.

Steve Martin plays the leader of the Boov, Smek. Did he improvise any of his lines?

He did that all over the place in his goofy, off-the-cuff kind of way. He went off on a whole story about how he ran from the Gorg (the Boov’s mortal enemy) and it went on for about ten minutes. We could hardly move for laughing so hard. He’s really amazing.

Could you tell us about the design of the Boov and the Gorg?

Even though the Boov are invading Earth, we wanted them to be funny and cute. They have this bubble technology, so we used that round shape for them. And for the Gorg, what could be worse for a bubble than a pointy thing?

The Boov’s way of speaking is quite unique. Was that difficult to interpret from book to script?

Our writers Matt (Ember) and Tom (J. Astle) were really good at putting that syntax together. And Jim could do it right away, maybe because of Sheldon and the way he prepares – which is very meticulous and precise. Sometimes it would be too much…so we did weed it out a bit. Jim is amazing: he can just rattle that off and sound like that is how he should speak and how he’s always spoken.

All going well, would you like to make a sequel?

I think what we will do is brainstorm what kinds of questions people were left with at the end of the film, if any, and how we want to proceed. But the goal of course would be to bring all the characters back, and more.

Home is out in UK cinemas on 20 March – read our review here. For up-to-date news on the biggest movies, grab the latest issue of SciFiNow.