We feel pretty confident in telling you that you will have a difficult time putting down GX Todd’s debut novel Defender. It’s a post-apocalypse with a twist, in which the voice in your head might not be your own. Two strangers travel across the burnt-out America, trying their best to avoid the roving gangs of killers and madmen, but survival is a tricky thing in this world…It’s drawn comparisons to Stephen King, Clive Barker, Justin Cronin, and with good reason.

We’re huge fans of Defender so we were very excited to talk to Todd about her inspirations, the challenges of crafting a post-apocalypse, and why libraries will always be incredibly important.

Could you briefly describe the story of Defender?

Many people are dead. The voices inside their heads made them do it. A survivor called Pilgrim, who hears a voice of his own, meets a girl who desperately wants to find her sister. Between them stands six hundred miles of dangerous roads and the paranoid people who travel them, where anyone could be hiding a voice that wants to slaughter them. BOOM.

What came first, the post-apocalyptic setting or the reason for it?

Definitely the setting. It’s set seven years after the events that caused so many deaths because I wanted a world where the laws of society were gone and survival was key. I don’t think I’d fully worked out the reasons why it had all happened until maybe the third draft. I’m not that great at planning.

I loved the back and forth between Pilgrim and Lacey, and the POV chapter swaps worked very well. How did these characters and that dynamic develop?

Pilgrim came to me fully-formed. In the original draft he was the sole POV character for the first third of the book. He was so compelling to write, and it was fun giving his cantankerousness free reign. But I needed a foil for him (which comes partly in Voice), and Lacey filled that role perfectly. She’s the complete opposite to him—talkative, naïve, female, young. And when you put two characters together who are so polar opposite, you’re almost guaranteed to get an interesting dynamic.

Was it tricky to get Voice right? It feels like he could have gone over the top, or could have become an easy cheat for the characters to get out of tight spots!

Every sarcastic, dry line that comes from Voice is pretty much what I’d say in that situation. Out of all the characters, I’d say he’s the most comparable to me. I think what’s interesting about Voice is that he’s very much a construct of the environment he lives in (Pilgrim’s head) and, as such, is just as isolated as Pilgrim is. It puts quite a few constraints on him. Plus, I didn’t want the voices to be all-knowing and powerful from the outset. I wanted them to develop and grow, as characters in their own right, over the series.

What’s the biggest challenge in creating a post-apocalyptic setting? Was there anything that you specifically wanted to avoid?

I made the decision early on that I didn’t want to write about an apocalypse as and when it happened; other authors have done it far better than I ever could. I was more interested in looking at the world and its survivors in the years afterwards, both in their new physical environment but also their new psychological one; seeing how they lived and interacted, seeing if they had overcome the worst parts of their nature or whether they had succumbed to them. It’s actually very cathartic to rid the world of civilisation and technology. It simplifies things a great deal, giving you a clean slate to work from. The most challenging task is keeping all those aspects contained in a largely believable set-up.

Things do get very dark in places and it’s pretty brutal from pretty early on! Was it difficult to try and find the right balance between taking the reader to some upsetting places without creating something that’s purely horrific and miserable?

It’s fun to read reviews that say things like “Defender makes Mad Max: Fury Road look like Disney!”. I honestly didn’t think it was that bad! I think I’ve become desensitised over the years by all the horror films I’ve watched…

I write a lot by instinct. There are some violent scenes, but I do infer a lot, too, choosing to leave it up to the reader’s imagination. The last thing I want to do is write anything gratuitous just for the sake of it. However, it’s important to me that I tell as authentic a story as possible and, unfortunately, in the kind of world I’m writing about a lot of horrible shit happens. Of course, there’s also a lot of bravery and selflessness. Hopefully, it balances out by the end.

Were there any specific influences that you drew on?

Hmm, not specifically. I love comparisons with things like The Walking Dead or Justin Cronin’s The Passage (neither of which I’ve watched or read) because it proves there are certain story structures and character archetypes that are universal and are used over and over again. I like that; that we’re all re-using the same stories but telling them in our own unique ways.

I’ve always read a lot of horror and science-fiction (authors like John Wyndham, Richard Matheson and Stephen King spring to mind), so they become influences and filter into your work whether you intend them to or not.

Had you always conceived this as the start of a series?

Nope. Defender was written as a standalone. But then I got carried away with the world I’d created and wanted to spend some time playing in it. There’s a great attraction to writing something epic, something that spans a number of books. The first imaginative worlds I got caught up in as a kid (The Wheel of Time and Shannara worlds being two) were always immersive, deeply-constructed universes where the reader could become totally lost if they wanted. That seemed like a cool thing to try and create. Would I choose to write another series knowing what I do now? Ask me again when I’ve finished book four.

I loved the sequence set in the library! How important was it to you to include that and to show the impact that space and the books mentioned has on these characters?

Incredibly important. Even if my characters turn out to be the crappiest people in the world, if they read for pleasure, then there’s always a hope they can be redeemed. Books and libraries have played such a pivotal role in my life, they’re like my lifeblood. They will always find their way into my stories one way or another. Do you want to know a secret? There’s an important library reference in book 2, as well. See? I can’t help myself.

The voices are a fantastic idea, and there’s a note at the end of the novel directing readers to places where they can get more information about mental illness and schizophrenia. How much research and work was involved to make sure you were creating something intriguing and entertaining without being disrespectful to real illnesses?

I spent a lot of time reading up on areas such as auditory hallucinations and suicidal ideation. I read some personal testimonies, too, which, believe me, were distressing and illuminating in equal measure. Even though Defender is a work of fiction, I don’t want anyone to think I’m not taking these issues seriously. In fact, the people in the case studies I read have directly affected the direction the series will go.

I also explored theories behind human consciousness, including Julian Jaynes’ Bicameral Mind theory (which the recent Westworld series played around with). Doctors and scientists continue to struggle to define exactly what consciousness is, and that leaves plenty of space for writers like me to get creative.

Do you remember what your first encounter with genre fiction was?

Yes! Two books in my school library. The first was by Monica Hughes, an author who wrote junior fiction based in fantastical worlds. Devil On My Back was my first experience with the age-old “people living in a dome” sci-fi conceit and I LOVED it. The second was Killer Planet by Bob Shaw, which was a science-fiction expedition adventure. I can still picture the front cover: two teenagers dressed in nifty green jumpsuits, running terrified from a futuristic-looking digger. I’m fairly sure no one got crushed.

Which author are you particularly excited about at the moment?

Wow, that’s a toughie. I’ve just started reading Beth Lewis’s The Wolf Road and I can already tell it’s going to make me sick with jealousy with how well it’s written. Am I only allowed to pick the one? That’s so mean! Can I just quickly say that if you have a couple of hours spare, go read The Beauty by Aliya Whiteley. It’s fantastic (but be prepared to be disturbed). 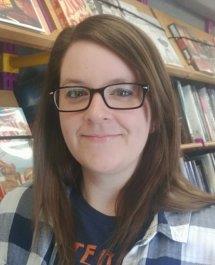 Defender by GX Todd is available from Headline on 12 January. Keep up with the latest genre news with the new issue of SciFiNow.