It turns out Hollywood very nearly missed out on Guillermo del Toro. The Mexican director was so burnt on Mimic that he nearly gave up on Hollywood for ever – and a certain controversial movie mogul was to blame.

“My first American experience was almost my last experience because it was with the Weinsteins at Miramax,” he told the audience at a Screen Talk at the BFI. “Two horrible things happened in the late 90s – my father was kidnapped and I worked with the Weinsteins. And I don’t know which one was worse. The kidnapping made more sense…” But, in classic del Toro style, he figured out how to turn the negative into a positive. “I really hated the experience [of Mimic] but I learned to fight.”

Del Toro did not go easy on the Weinsteins in his Screen Talk, later saying that “back then the Weinsteins had – publicly – a hallowed aura of patrons of the arts. Like the Borgias. And I don’t want to dine with Lucrezia.”

As Hollywood explodes in the aftermath of the Harvey Weinstein scandal (he harassed and assaulted a bunch of women, in case you’ve been living under a rock for the last few days) and it’s forced to examine its ugly treatment of women, del Toro has created The Shape of Water, a truly beautiful film. It centres on a mute female janitor (Sally Hawkins) who falls in love with a fish man (Doug Jones) who is being experimented on by Strickland (Michael Shannon) in a secret government facility.

“Everyone’s talking about the scandals and power abuse,” del Toro says, “but it’s not limited to film. The world is a fucking rigged game and it’s been rigged for millennia. So I just try to find interesting people with interesting lives that clean toilets, but can also be incredible enemies to a guy like Strickland. That’s what I want to do. I want to see the kids in The Devil’s Backbone kill the fascist. I want to see the little girl have a better ending than the fascist captain. Because the world most of the time doesn’t work like that. I think we should aspire to better.” 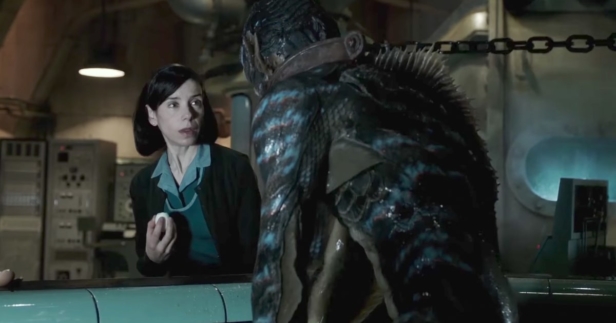 Del Toro says he is, for the first time in his career, “100% happy” with The Shape of Water. “The Shape of Water is the first movie I’ve done that is hungry for life… It’s almost like I spent nine movies inhaling, and this is the first time I exhale.” The film is a passion project for him, one he wrote with Sally Hawkins in mind from the very beginning, and one which sums up his entire ethos perfectly. “I thought it could be about embracing and loving the otherness, which my entire career has been about, but I could finally phrase it in a way that I thought was magical, for want of a better term.”

And in case you’re wondering where the title came from, del Toro gave an explanation that made everyone in the room spontaneously get something in their eye.

“The first thing I found was the idea of water being love, because love is like water, it has no shape. It can take the shape of whatever you pour it into. You can fall in love with someone that is twice your age, the same gender, completely opposite religion, the completely wrong political persuasion – it just happens. And it is, like water, the most powerful and malleable element in the universe. And it goes through everything.”

The Shape Of Water is in UK cinemas from 16 February 2018. Get all the latest fantasy news with every issue of SciFiNow.