We’re heading back to the Nineties in Netflix’s slasher-fest Fear Street Part 1: 1994 and with any good slasher movie from the Nineties, you have to have an iconic serial killer.

In this case, it’s ‘The Skull Mask Killer’ aka Ryan Torres – a seemingly normal teenager from the town of Shadyside who suddenly goes an a murder rampage one night while working late at the local mall. Find out more with SciFiNow’s killer profile… 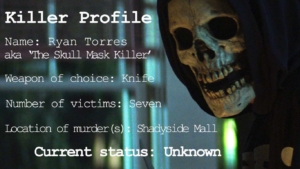 Based on R.L. Stine’s best-selling horror series, Fear Street follows Shadyside’s sinister history through a nightmare 300 years in the making.

The first chapter in the trilogy is set in 1994, and follows group of teenagers who discover the terrifying events that have haunted their town for generations may all be connected — and they may be the next targets.

There are plenty of iconic serial killers to look out for in all three movies of Fear Street but co-writer and director Leigh Janiak considers Skull Mask her favorite: “I think it’s just because I have an affinity to the Nineties!” she tells us when we ask her why.

In fact, Janiak and her crew created each serial killer based on the decade in which their murder sprees take place and seeing as she attributes Wes Craven and written by Kevin Williamson’s 1996 slasher classic Scream as an influence, Skull Mask had to have the “knife and the Halloween costume”.

The Ghost-Face-inspired killer isn’t just a firm favourite with its creator, the cast of Fear Street Part 1: 1994 think he’s a pretty effective murderer too…

“Skull Mask is pretty scary because of the knife,” Benjamin Flores Jr.tells us who plays Josh. “The more and more I think about him just wearing a cloak and you can’t see his feet [it looks like] he’s just like moving really fast. He just pops up on you and he has to get really close for those kills!”

“Yeah his knife is so small that he’d have to stab you a bunch!” agrees Olivia Scott Welcs, who plays Sam. “And that’s scary…”

“The first skull mask murder scene you’re kind of like ‘oh… this is a lot!’” adds Kiana Madeira who plays Deena. “Lots of damage was done for that death to happen…!”

Indeed, like Scream, Fear Street Part 1: 1994 starts with a horrific murder that sets the mood for the rest of the movie: “[The Nineties] was this great era of what I think was a resurgence of the slasher genre with movies like Scream which had characters that were a little more self-aware, a little more sarcastic, it was kind of challenging the conventions of the genre,” she tells us.

“It was so fun creating the killers,” Janiak tells us. “I created a page backstory for each of the killers. I wanted to be able to have that for the actors that were playing them and then also hint at this world that could exist…”