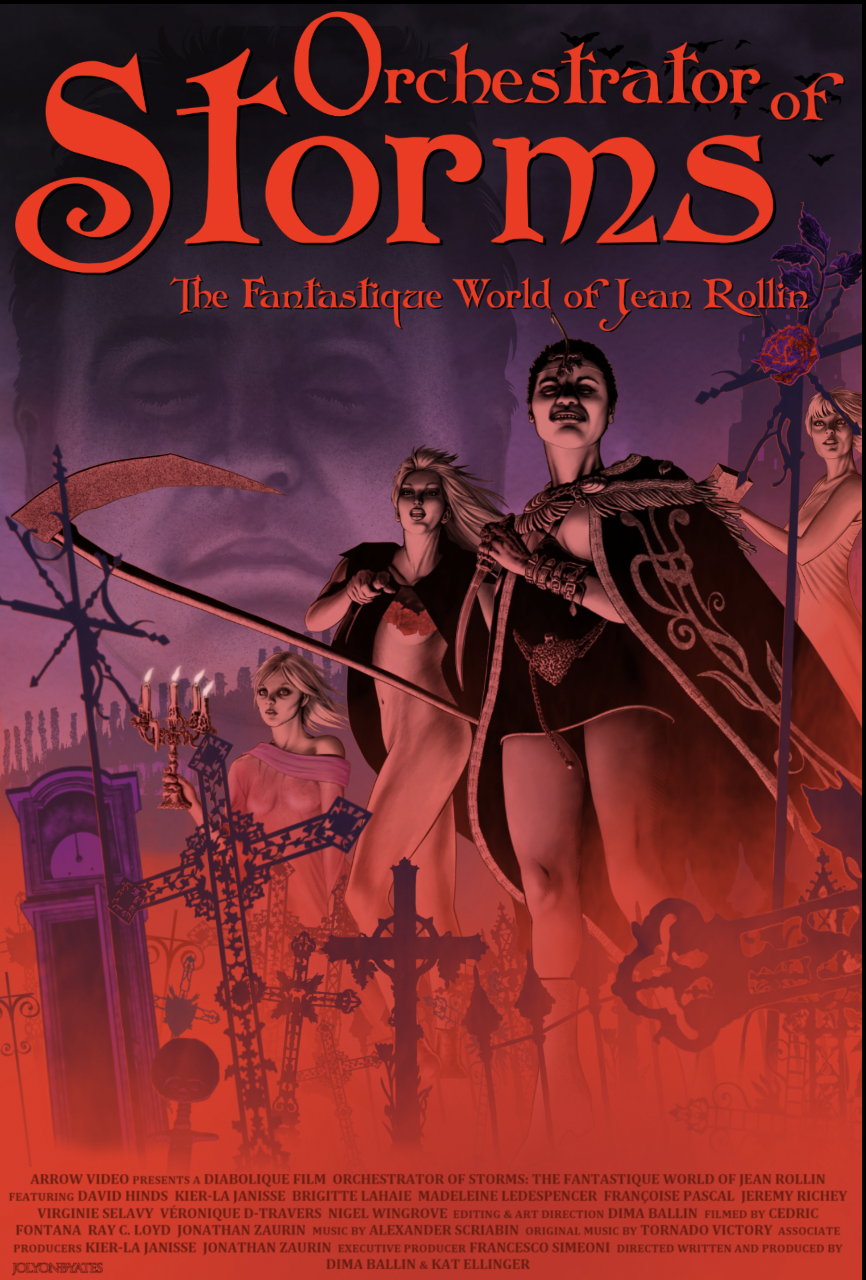 At the age of five, during the Second World War, Jean Michel Rollin Roth Le Gentil was taken to the cinema for his first time to see Abel Gance’s La capitaine Fracasse (1943). From that moment on, he wanted to be a visual storyteller, or as he would himself put it, an ‘orchestrator of storms’. This is a decidedly poetic turn of phrase, but then Jean Rollin – the shortened version of his name that he would later use to mark his authorship of the (non-pornographic) entries in his œuvre  – was no ordinary filmmaker, but the exponent of a singular, strange and utterly poetic approach to gothic materials in films like The Nude Vampire (La vampire nue, 1970), The Grapes of Death (Les raisins de la mort, 1978), Fascination (1979), The Living Dead Girl (La morte vivante, 1982) and Two Orphan Vampires (Les deux orphelines vampires, 1997).

Dima Ballin and Kat Ellinger’s documentary carefully traces both the poeticism and the surrealism of Rollin back to his childhood and to the influence of his mother Denise, a single parent, artist’s model and bohemian whose coterie regularly included Georges Batailles, André Breton, Maurice Blanchot, Jean Cocteau and Jacques Prévert. This introductory dip into Rollin’s early years (seen as the crucible for his later sensibilities) certainly matches his films, which were mournful, melancholic and decadent in their purview – in other words, backward-looking repositories of memory – as they built their delicate art from the ruins of the twentieth century. Given that Rollin passed away in 2010, this documentary too is a retrospective disinterring of the dead.

“I always think of them as Rollin films,” comments David Hinds, author of Fascination: the Celluloid Dreams of Jean Rollin (2016).

“His films are Jean Rollin films,” adds Brigitte Lahaie, an actress who frequently collaborated with Rollin, “It’s his touch.” What these similar statements illustrate is that Rollin’s filmography is idiosyncratically sui generis, auteurist, and difficult to pin down.

Orchestrator of Storms: The Fantastique World of Jean Rollin defines Rollin’s elusive body of work through a series of oppositions. They fall under the broader French category of fantastique (hence the documentary’s subtitle) rather then the narrower Anglo-American model of ‘horror’ – yet were made independently (by Rollin’s own production company Films A.B.C.) at a time when practically nobody was producing horror in France, so that Rollin was working in isolation and was able to play by rules of his own making. His early short films coincided with the emergence of the Nouvelle Vague, but his particular approach to politics, via the liberating power of the imagination, was at odds with the realist dialectics of his Wave-surfing peers. Indeed his feature debut The Rape of the Vampire (Le viol du vampire) was one of few films to have a theatrical release during the revolutionary month of May 1968, and its poor reception from an audience that had never before seen anything quite like it resulted in a riot.

The eroticism of Rollin’s films helped them fit into the exploitative end of the Eurocult market where the likes of Jess Franco resided – indeed when Franco left the production of Zombie Lake (Le lac des morts vivants, 1981), Rollin took over – but only his genuinely pornographic films (made under the name Michel Gentil) would earn him a living, while his passion projects were often neither sexy enough for the porn crowd nor horrific enough for genre fans. This misfit status, even on the horror circuit, meant that at the peak of his inventive artistry, Rollin was always struggling to get his films financed, let alone seen and appreciated – and it was only in the Nineties, as Rollin’s films started getting distributed outside of France in home entertainment formats (Nigel Wingrove whose Redemption Films helped get Rollin’s back catalogue released on VHS in the UK, is a contributor to the documentary), that the director’s work began to be recognised and reassessed, gradually acquiring a cult following.

Ballin and Ellinger use a tried-and-tested ‘talking heads’ format for Orchestrator of Storms: The Fantastique World of Jean Rollin. Interspersed through and between interviews with the likes of film scholar Virginie Selavy, Rollin’s close friend Véronique D-Travers, artist and aesthete Madeleine LeDespencer, and Françoise Pascal (star of Rollin’s The Iron Rose, aka La rose de fer, 1973), there is illustrative archival footage, as well as many sequences from Rollin’s own visually striking features, and excerpts (voiced by Benoît Carry) from Rollin’s own writings. Books on Rollin by Hinds and fellow contributor Kier-La Janisse (Lost Girls: The Phantasmagorical Cinema of Jean Rollin, 2017), and indeed this very documentary, represent an ongoing attempt, tragically posthumous, to resurrect Rollin’s films for critical reappraisal, and to draw attention to his oneiro-elegiac fantasies. For this is a commemorative portrait of an archetypal ‘struggling artist’, adding to Rollin’s belated reception as a dreamer and an outsider whose peculiar, eccentric cinema, for all its obsessions with a fading past, was ahead of its time.

The Orchestrator of Storms had its world première at Fantasia 2022. Find more SciFiNow reviews here.

The Innocents Review: A chilling and unflinching depiction of childhood
< Previous
Next >

The Innocents Review: A chilling and unflinching depiction of childhood