The San Diego comic con gave us a mouth-watering amount of new Marvel info, officially closing Phase 4 of the MCU with its two final projects (She-Hulk: Attorney At Law and Black Panther: Wakanda Forever) and opening the gateway to Phase 5, starting with Ant-Man 3: Quantumania.

Not only that but SDCC gave us the first real glimpse at Black Panther: Wakanda Forever with the official trailer. The sequel to 2018’s Black Panther is due in cinemas on 11 November and will be the final movie of the MCU’s Phase 4.

Speaking to the audience at Hall H during the panel for the movie, writer and director Ryan Coogler immediately wanted to speak about the late Chadwick Boseman who played T’Challa in Black Panther.

“It’s been five years since I was here,” he said to the packed crowd. “Five years ago, we premiered the first footage from Black Panther 1 and sitting next to me, our T’Challa, the late great Chadwick Boseman.

“The cast, including Chad, hadn’t seen the footage yet. So, we played it and he was excited and he grabbed my left shoulder with his hand. If you ever saw Chad in person, he had these enormous hands. It was part of the reason why he filled out the Panther suit so well, and he was really, really strong. He was getting excited as the clip went on and on and he was just squeezing down on my shoulder the whole time. When it went off, he was like, ‘oh, man, that was amazing. Congratulations.’ And I couldn’t even lift my arm. I felt his hand [for] the rest of that day and standing in here with y’all right now, I promise you, I can feel his hand on me right now. Chad is no longer with us physically, but his spirit, his passion, his genius, his pride and his culture, and the impact that he made on this industry would be felt forever.”

Black Panther: Wakanda Forever will see Queen Ramonda (Angela Bassett), Shuri (Letitia Wright), M’Baku (Winston Duke), Okoye (Danai Gurira) and the Dora Milaje (including Florence Kasumba), fight to protect their nation from intervening world powers in the wake of King T’Challa’s death. As the Wakandans strive to embrace their next chapter, the heroes must band together with the help of War Dog Nakia (Lupita Nyong’o) and Everett Ross (Martin Freeman) and forge a new path for the kingdom of Wakanda.

“This film has a ton of action,” Coogler promises. “It has humor, it’s a roller culture of a movie. It goes to new places in Wakanda that we haven’t seen before, but it also goes to new corners of the MCU…”

Phase 5 of the MCU will open with the third movie in the Ant-Man series, Ant-Man 3: Quantumania which will be in cinemas on February 2023.

“We finally get to spend some time in the quantum realm,” said director Peyton Reed (who has directed all three movies) on what we can expect from the movie. “We have a lot in store for these characters in this movie, and we’re going to meet a lot of new characters in this movie and explore the quantum realm, which is not always what you think it is…”

The movie will see the return of Paul Rudd as Scott Lang, Evangeline Lilly as Hope van Dyne, Michael Douglas as Hank Pym and Michelle Pfeiffer as Janet Van Dyne.

There will be a couple of newbies too. Ant-Man 3: Quantumania will also see Lovecraft Country’s Jonathan Majors as Kang The Conqueror and Scott’s daughter, Cassie, will be played by a new actress, this time by Freaky’s Kathryn Newton. “Cassie’s just becoming who she is supposed to be,” Newton said of the character, “she’s just figuring it out. So, you get to see that in this.”

The rest of the Phase 5 MCU movies will be: 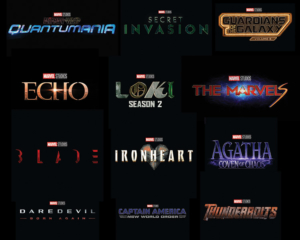 Not only does the above give us a glimpse at a whole new strain of movies, but it also confirms a Season Two of Loki and a continuation of Daredevil, with Charlie Cox still in the role of Daredevil, as well as Vincent D’Onofrio as Wilson Fisk (last seen in Hawkeye).

This isn’t the first time we’ve seen Cox as Daredevil since Season Three of the series finished back in 2018. He popped up in (spoilers!) Spiderman: No Way Home and, as you can spot in the new trailer for the upcoming Disney+ series, She-Hulk: Attorney At Law – it looks like he’ll be lawyering with She-Hulk herself!

It’s not just all newbies in Phase 5. There will also be a brand new adventure for the Guardians of the Galaxy, which will see our beloved band of misfits looking a bit different these days. Peter Quill, still reeling from the loss of Gamora, must rally his team around him to defend the universe along with protecting one of their own. A mission that, if not completed successfully, could quite possibly lead to the end of the Guardians as we know them.

James Gunn will be yet again writing and directing the latest Guardians movie, fresh from his stint in the DC Universe with The Suicide Squad and Peacemaker.

“It’s really been about telling one story between the three films, with a couple of sideways adventures into some of the other universes,” Gunn told audiences at SDCC. “This is about the final arc that we began at the very beginning of Guardians of the Galaxy. This is the full story where I always intended to go when I started.”

So where will find our beloved tearaways in the latest movie? “You find Peter Quill obviously reeling from the events of End Game and from having lost Gamora,” Chris Pratt says, who plays Peter Quill. “It opens up a vulnerability to the Guardians of the Galaxy to danger. So, he spends the movie trying to make up for the mistake of being kind of checked out and buried under this enormous amount of pain.” 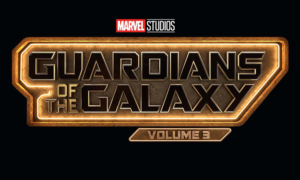 The movie will also see the return of Pom Klementieff as Mantis, Sean Gunn as Kraglin and Karen Gillan as Nebula.

“We’re going to see a little bit of levity from Nebula this time around,” Gillan says. “Maybe she’s going to be a little funnier. She had a very cathartic experience with Thanos being eliminated from her life and so, I think she can begin to form the personality that she was meant to have while still maintaining a little bit of the meanie because we can’t fully lose the meanie. You always need a little bit!”

The movie will also welcome Borat’s Maria Bakalova as Cosmo the Spacedog (“I hope you love Cosmo because she’s going to bring lots of laughs and love and a bit of a strength!” she says), Peacemaker’s Chukwudi Iwuji as The High Evolutionary and Dopesick’s Will Poulter as Adam Warlock.

Outside of Phase 5 of the MCU, Marvel has also confirmed Season Two of What If…? in early 2023, a brand-new X-Men series blasting to Disney+ entitled X-Men ’97 streaming in the autumn of 2023 and a Spiderman series Spider-Man: Freshman Year in 2024 on Disney+. 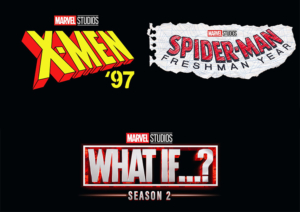 Now, we don’t know if the above will comprise of Phase 6 of the MCU. In fact, we don’t know much at all. All we know that it will start with The Fantastic 4 and end with two Avengers movies, Avengers: The Kang Dynasty (May 2025) and Avengers: Secret Wars (November 2025).

But what else? Well, there’s talk of a third movie for both Deadpool and Black Panther. Watch this space…