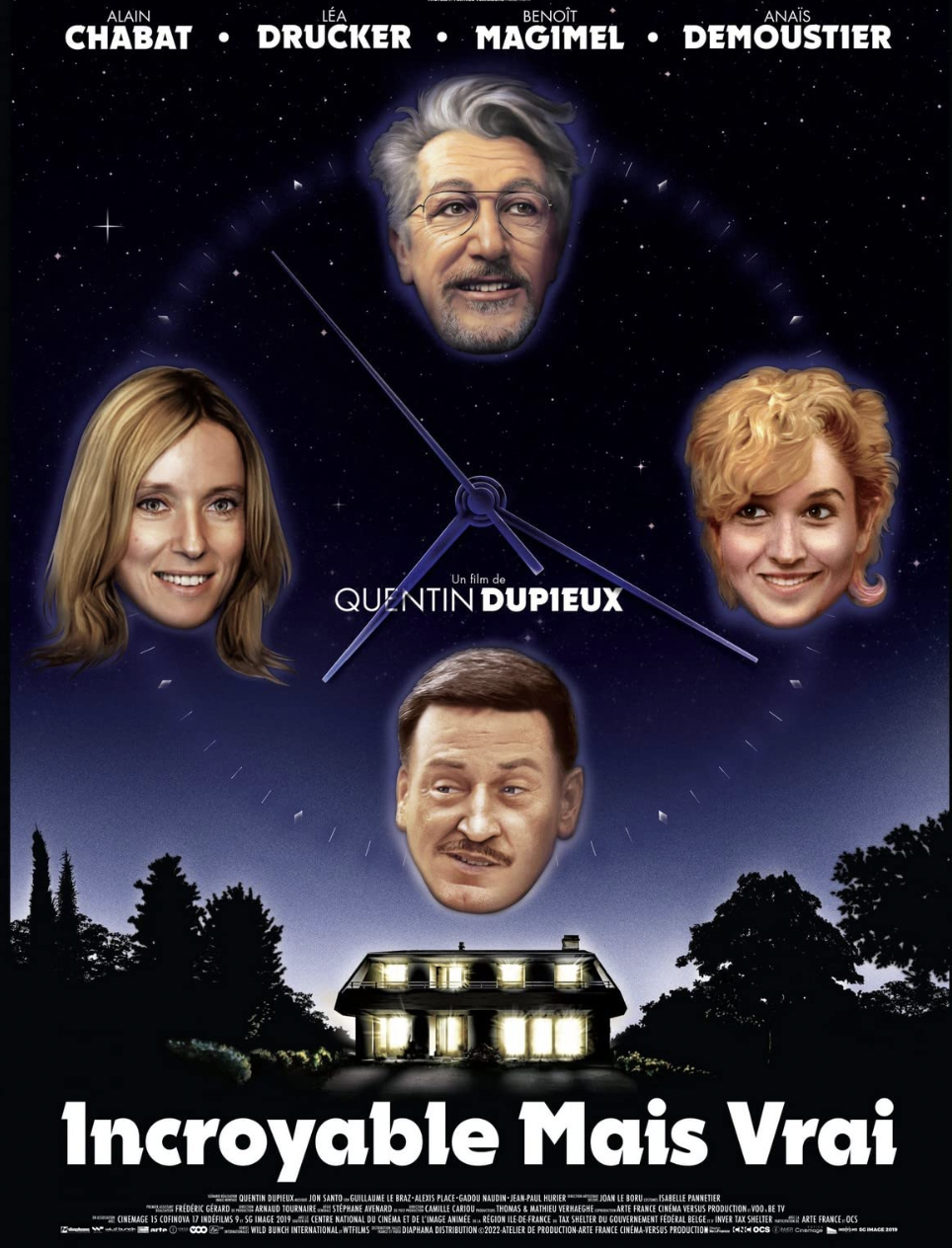 In the opening sequence to Quentin Dupieux’s Rubber (2010), a police officer inexplicably steps out of the boot of a car in the desert and addresses both the camera and an intradiegetic audience about what he calls “the ‘no reason’” in films, “that most powerful element of style”. This serves as a practical manifesto for all Dupieux’s films, including Reality (2014), Keep An Eye Out (2018), Deerskin (2019) and Mandibles (2020), which, even as they focus on the experiences of shabbily ordinary schlubs, are propelled and ruled by a deep irrationality. It is a principle instantiated in the very title of Dupieux’s Incredible But True (Incroyable mais vrai), which begins with a couple, Alain and Marie Duval (Alain Chabat, Léa Drucker), trying hesitantly to explain to camera – or really to somebody unseen off camera – the incredible situation in which they find themselves. “We’re afraid you’ll think we’re crazies if we tell the story,” says Marie.

The sequence cuts just as Alain is about to launch into his unbelievable tale (revealed in a lengthy flashback that eventually catches up with this prologue, before continuing past it). Indeed Incredible But True is full of scenes where various characters – the realtor Franck Chaize (Stéphane Pezerat), Alain’s boss Gérard (Benoît Magimel) and his girlfriend Jeanne (Anaïs Demoustier) – offer formal preambles to stories that are unbelievable, illogical, impossible, and where at least some of their stories’ content is deferred.

Indeed delays, deferrals and the turning back of time are key here. When we first meet Alain in the narrative proper, he is distracting himself with a lo-res version of Asteroids on his computer in the insurance office where he works, even though he is late drawing up a client’s contract, and also late to a house-viewing appointment with Marie (“I’m so busy with work”, he later tells her apologetically). The suburban house is like a time-capsule of the previous occupants, with its interior walls painted in a now unfashionable orange that still bears the imprint of paintings that once hung there, and with an old car wreck left abandoned in the overgrown garden. Adding to the temporal confusion, the scenes of the house viewing are intercut with scenes, some time later, of the couple moving in on their first day of ownership. It will not be the only occasion when Dupieux conveys a slippage of time simply through the power of editing – for later, developments in these characters’ lives over weeks, months and even longer will be artificially accelerated through a brisk montage.

The realtor Franck is mostly undemonstrative about the house that will soon become the Duvals’ home, but he does get simultaneoulsy enthusiastic and mysterious about one feature that he calls ‘the jewel of the visit’ and ‘radically life-changing’. As Franck assures the sceptical couple, “It’s so wild, you won’t believe me”, he leads them down to the basement, and then via a ladder even further down into a duct beneath a trapdoor. This is the film’s element of ‘no reason’ – for what they encounter there defies all logic, breaching the normal continuities of space and time, but must now, in one way or another, be accommodated in their everyday lives.

Alain, always preoccupied with work and relatively content with his lot, is more than willing to ignore the duct’s existence entirely and just carry on his life as usual with Marie. Marie, however, dissatisfied that it is too late for her to have children with Alain, let alone to realise her childhood dream of becoming a model, starts spending more and more of her time in the duct than with her loving husband, and fast becomes maniacally obsessed with the potential that it offers, while ignoring the dangers in the small print. Meanwhile Alain’s boss Gérard is going through a classic male mid-life crisis, and is trying to compensate for the passing of his prime by trading in his partner, his car and even the most intimate parts of his anatomy for newer, flashier models.

All Dupieux’s films let characters deadpan their way through absurd situations – but Incredible But True is the first to harness its surreal comedy (including, near its end, a very direct allusion to Luis Buñuel and Salvador Dalí’s 1929 surrealist masterpiece Un chien andalou) to address serious issues: the ravages of time, the challenges of ageing (or at least of ageing gracefully), and the perils involved in any attempt to wind back the clock on the inevitable. “Getting old is horrible,” complains Marie, practically stating the film’s theme.

Yet in Dupieux’s bittersweet shaggy dog tale, where some go mad, others just go fishing, in the later years of their lives. And where, with Primer (2004), Shane Carruth explored, to dizzying, bewildering effect, every paradox and paradigm shift created by the mechanism for time travel which his characters discover, Dupieux is more like Alain, recognising that the duct is there, but preferring to forget about it as he gets on with the sometimes diverting, sometimes deadening minutiae of life.

The results are funny, to be sure, but also come with a layer of autumnal melancholy, as the fear of mortality proves to be something that can drive us crazy if we do not learn to lock it away deep in our mind’s basement.

Orchestrator of Storms: The Fantastique World of Jean Rollin (2022) review at Fantasia 2022
< Previous
Next >

Orchestrator of Storms: The Fantastique World of Jean Rollin (2022) review at Fantasia 2022