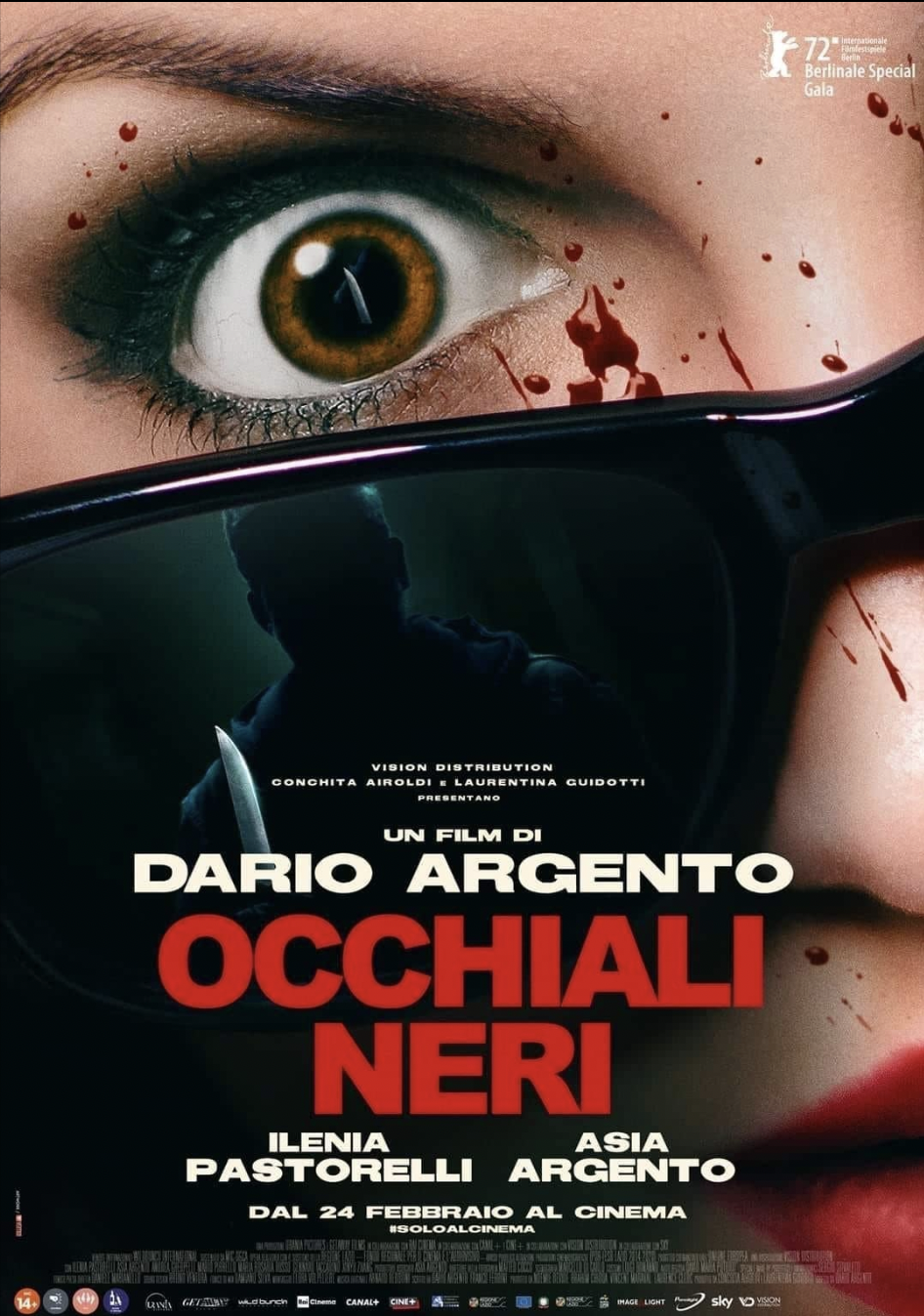 Giallo king Dario Argento’s Dark Glasses opens with a wide establishing shot of residential buildings in Rome’s leafy suburbs, and then various mobile shots looking upwards at roadside trees and apartment blocks. As it is revealed that the perspective belongs to Diana (Ilenia Pastorelli) at the wheel of her car, she is distracted, as we are, by the sight of people standing on balconies and also looking upwards through filters that they are holding in their hands. Eventually she comes to a stop at a park, and joins a large group of others, all looking upwards as a total solar eclipse takes place overhead. As a shadow falls over the world and dogs can be heard barking all around, Diana, lacking a proper filter, dons her sunglasses instead to watch the cosmic spectacle unfold. Later Diana, certainly no virgin like her namesake from the Roman pantheon, will keep her sunglasses on during sex because, as she tells her supine john, her “eyes are irritated from watching the eclipse.” The kindly client, quoting ‘some French writer’, will tell Diana, “Neither the sun nor death can be stared at.”

This opening introduces several motifs that will come to dominate Dark Glasses. First those POV shots, here innocent enough, but also a familiar cinematographic mode from the earlier gialli of Argento, typically used to conjure a killer’s presence while disguising his or her identity, and forcing the viewer into an uneasy complicity. Then there are those barking dogs, in a film that will turn out to be full of snarling, baying, snapping canines. And finally that focus on what can and cannot be seen.

For Diana, temporarily dazzled by the sun’s light, will soon be left completely blind after a prostitute-hunting serial killer causes her to have a horrific car accident. With help from her ‘mobility and orientation instructor’ Rita (Asia Argento) and a guide/guard dog Nerea, Diana must learn fast to navigate spaces without the power of sight if she is to escape her would-be murderer. Along the way Diana will form an unusual bond of co-dependency, rooted in loss, with Chin (Andrea Zhang), the seven-year-old Chinese boy who was orphaned when Diana was sent barreling into his parents’ car.

Featuring a murderer who (just like the viewer) spends his spare time watching violent slashers, this is a self-referential, metacinematic world. “I grew up here with my father,” says Rita of her home in Formello, but her words also resonate in the house of genre, given that Rita is played by Argento’s own daughter who indeed first appeared, age 18, in her father’s Trauma (1993) and has subsequently starred in his The Stendhal Syndrome (1996), The Phantom of the Opera (1999), Mother of Tears (2007) and Dracula 3D (2012).

Still, one can sense Argento here harking back to his first phase of filmmaking, as the image of a blind adult being guided by a child recalls his The Cat O’ Nine Tails (1971), while the notion of a guide dog turned attack dog evokes his Suspiria (1977), and the almost romantic ending between human and animal conjures the close of Phenomena (1985). In terms of quality, Dark Glasses falls somewhere between these two periods: somewhat subpar by the standards of Argento’s earlier works, but better than much of his later œuvre.

Informing the understandably upset Chin that his mother has died, Diana consoles the boy: “You’ve got to think of it like this: it’s like a bad dream, that when you wake up you’ll realise it’s not real, that it doesn’t exist.” While telling a young child to retreat into fantasy rather than facing reality constitutes questionable advice, Diana’s words certainly serve as a guide for approaching Dark Glasses itself, which is increasingly irrational and oneiric (just wait till you see the surreal kind of attack that this odd couple sustains shortly after Diana says this).

Argento’s film presents itself formally as a giallo, with a killer on the loose, cops on his tail, and regular narrative pauses for murder set pieces. Yet it is no whodunnit: the murderer’s identity, which keener scented viewers will discern very early on, is explicitly revealed about halfway through, and from there it is all just blind (wo)man’s buff. Still, the film seems more likely to be remembered not for its detective business, nor for its cat and mouse, but rather for its nightmarish weirdness, as a dream logic gradually comes to pervade everything.

Repeat Review: The end is just the beginning
< Previous
Next >

Repeat Review: The end is just the beginning