Director Yeon Sang-ho is back with the sequel to Train To Busan with Peninsula. Set four years after the devasting zombie outbreak as seen in Busan, this time we follow soldier Jung Seok (Dong-Won Gang) who returns to the now-quaratined South Korea after narrowly escaping. There, he finds a family of survivors including mother Min-jeong (Lee Jung‑hyun) and children Joon‑i (Lee Re) and Dong‑hwan (Moon Woo‑jin), as well as a dangerous unit of soldiers who are using people for sport. Will Jung Seok manage to escape again?

Full to the brim with heart and action, Peninsula takes the Busan franchise on a whole new epic journey. We speak to its star Lee Jung‑hyun, who plays Min-jeong, about her love of the zombie genre, preparing for her action sequences and Yeon Sang-ho’s excellent time-keeping and humour! 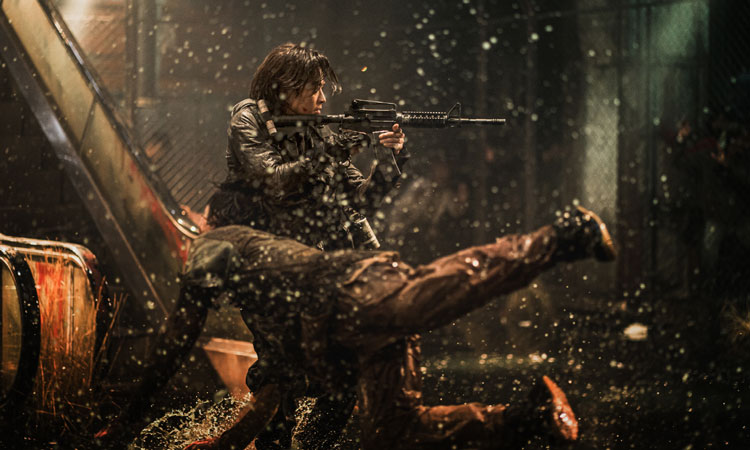 How did you first get involved in Peninsula?

I received a phone call from Director Yeon one day saying: “Hey Jung-hyun, I think it’s time for us to do a movie together!” and sent me the script. I was already a fan of Director Yeon’s animations like The King of the Pigs, The Fake, Seoul Station and the movie Train to Busan so I didn’t hesitate to say yes.

What were your first thoughts when you read the script to Peninsula?

Normally if I read a script and I don’t find it interesting, I would usually take hours or even days to finish it. But with Peninsula, the stories of the characters were so interesting, like Min-jeong and the kids, Elder Kim and Jeong-seok to name a few. The tension built up from Unit 631’s response to the situation, and the human instinct to fight and survive in the zombie apocalypse was exhilarating. I also really liked the hopeful ending.

What were your first thoughts on your character, Min‑jeong?

I loved the fact that Min-jeong was a strong independent female character and how she was able to draw her strength and toughness from maternal love. It made me realise that any mother in the world would have acted the same as Min-jeong, and would become a warrior to protect her family in the ruins. It was charming how she was very kind and warm to her children, but turned into this savage warrior when she sensed danger towards her family.

Min‑jeong clearly has a rich backstory that we’re never told – did you create a backstory for her and how did you prepare for the role?

I asked Director Yeon a lot of questions about Min-jeong’s backstory. For example – what was her relationship between Unit 631’s Captain and Sergeant? How did a soft-spoken, ordinary mother from the first scene of the movie turn into this tough warrior Min-jeong… and what happened to her husband after the beginning of the movie?

Director Yeon said that her husband was bitten by a zombie and died that day at the start of the movie, and that’s how Min-jeong and her kids got forcefully dragged into Unit 631. In order to survive, she needed to transform into a complete warrior. To convince the audience of this transformation, I made the focus of Min-jeong’s character her love for her children, and her desire to protect them. Otherwise, I don’t think she could’ve turned into this tough character surrounded by the horrible monsters within Unit 631. I think all mothers, including myself, would transform themselves into warriors in order to protect their kids if Peninsula happened in real life.

Peninsula is a great mixture of practical and visual effects – what was that like to work with?

It was an extraordinary experience. I couldn’t imagine how Director Yeon would express the apocalyptic city, or how shooting car chase scenes on a green screen would turn out, so I was full of worries. I shouldn’t have worried! Director Yeon pulled out CG work that had been prepared months earlier, and with it, demonstrated the scenes and actions on multiple screens which made the acting experience much more comfortable. The environment was just perfect, and the final product really blew my mind.

What was it like doing the action sequences in Peninsula?

I was really worried at first. I knew there would be a lot of action scenes and I was expecting to do action sequences on demand, so I went and joined an ‘action school’ for three months to train for the big day. But maybe because Director Yeon has an animation background, his action sequences and cutting techniques were so well-thought out and calculated to perfection. He didn’t ask me to do any unnecessary action sequences, but a simple burst of two- or three-second moves. When it was edited together, it was a work of art. I learned all sorts of actions like flying kicks, and jumping and rolling on the floor with a gun, but Director Yeon made it so much safer and easier by creating effective action sequences that prevented anyone from getting an injury. I really want to thank Director Yeon for that!

Had you already watched Seoul Station and Train To Busan before working on Peninsula?

Like I mentioned above, I loved watching Seoul Station and Train to Busan, and I found it really thrilling and entertaining. I also work as a singer and I really like the concept of zombies in general. In 2013, I released a music video called V which had a zombie theme and was produced by Director Park Chan-wook (Old Boy) and Park Chan Kyung (Night Fishing). So I naturally loved watching Seoul Station and Train to Busan. I was so obsessed with Train to Busan that I watched it five times at the theatre – so you could imagine how surprised and happy I was when Director Yeon suddenly contacted me to do Peninsula together. 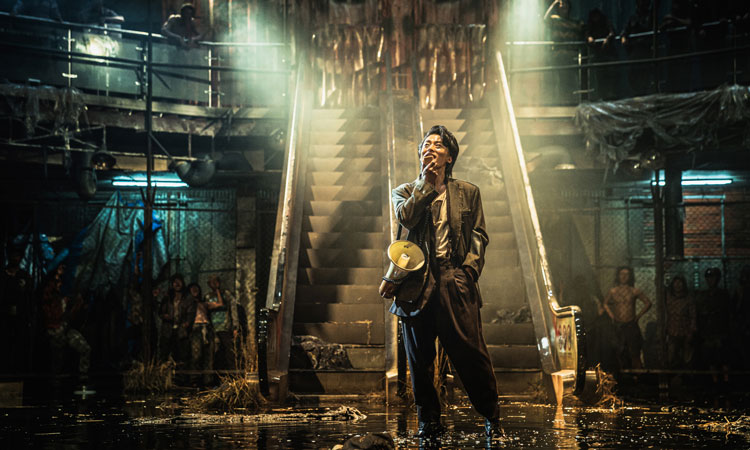 The set was perfect – really comfortable and safe. There was so much food in the waiting room, and even the food trucks were amazing too. Because Director Yeon is a genius with storyboarding and cutting techniques, we would usually finish five to six hours ahead of schedule. He’s full of humour, so everyone was constantly laughing on the set. I think he really wants to break into acting though, he would always re-enact our scenes hilariously and we couldn’t stop laughing with him – sometimes there was some sincerity in his acting which helped a lot as well. Thanks to Director Yeon, everything ran so smoothly that we would always go home a couple hours early – I already miss working on Director Yeon’s set.

What do you want audiences to take away from Peninsula?

I hope you realise the importance of your family and how strong a mother’s bond with her children is. I hope that you can really feel and experience the post-apocalyptic city, especially as the car chasing scenes are super realistic, so if you can, I recommend trying to watch the movie on a specialty screen like 4DX.

I just finished filming The Limit (directed by Yi Seung-jun) where I play a police officer, and I’m currently shooting Decision to Leave directed by Park Chan-wook. Thank you all for your support, and I hope you continue to keep supporting me in the future. Thanks!

Train To Busan Presents: Peninsula is on digital from 23 November and on Blu-ray, DVD and Steelbook from 30 November.

Flashback: The Sixth Sense
< Previous
Next >