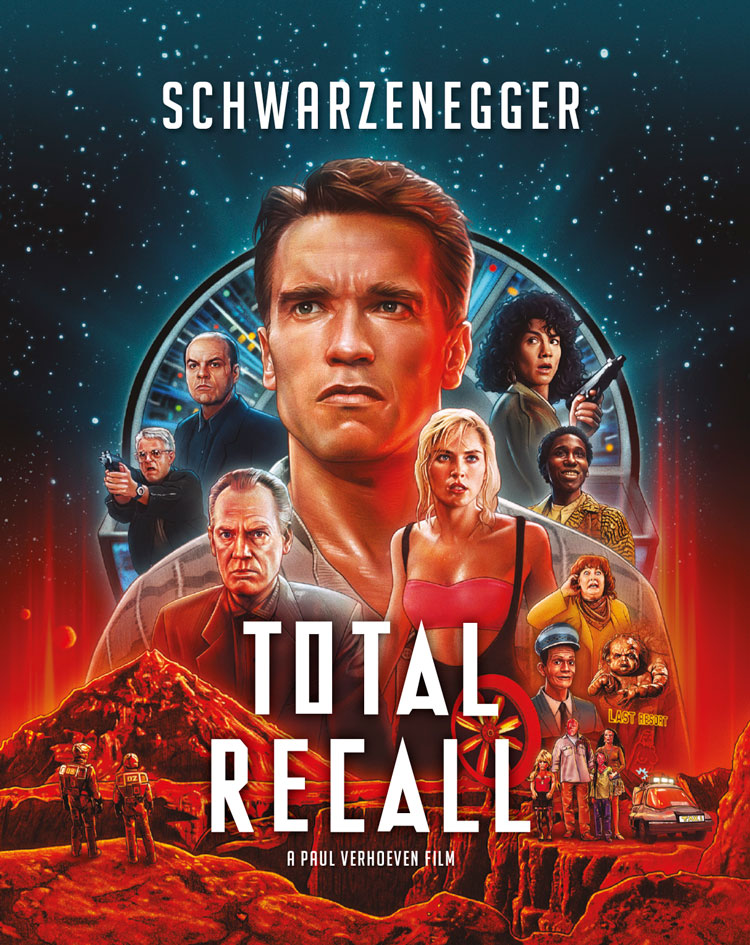 The year is 1990. It had been three long years since audiences were beguiled and horrified by Paul Verhoeven’s sci-fi police horror, Robocop, but they were about plunged into a similarly disturbing (and vastly bigger) world by the very same director… and they loved it.

Set in 2084, Total Recall tells the story of Douglas Quaid who, after deciding to use the Rekall services to plant a memory in his brain, soon finds out that not everything is as it seems. Instead of the average, married construction worker he thinks he is, Quaid soon finds out that he is, in fact, a spy on the run and all the answers he’s looking for lies on Mars. A destitute planet where its residents reside under huge domes and have to pay for the air they breathe (which they usually can’t afford, resulting in many being born with birth defects and strange abilities), Mars has plenty of problems. Soon embroiled in the politics of the planet, Quaid discovers that his mind isn’t the only thing that’s been manipulated and he quickly finds himself with the fate of the entire planet in his hands.

From the outset, Total Recall had a lot riding on it. Based on legendary genre author Philip K. Dick’s short story ‘We Can Remember It For You Wholesale’, the movie’s lead was Arnold Schwarzenegger, one of the biggest action stars of the time, as Quaid. Alongside him were seasoned character actors Ronny Cox, Michael Ironside and Marshall Bell (as well as a young Sharon Stone, whom Verhoeven would later cast in the career-catapulting role of Catherine Tramell in Basic Instinct).

Indeed, with the calibre of talent behind Total Recall, its budget had to match its status. Luckily it had been picked up by Carolco Pictures who had famously made one of the most expensive and explosive movies of the Eighties with the wildly successful Rambo: First Blood Part II.

The movie was an immediate success. People marvelled at its action, satirical bite and excellent effects. The latter’s accomplishments were largely thanks to special-effects genius Rob Bottin and Verhoeven deciding to primarily use practical effects (in fact, a huge miniature was created for the scenes that span the planet of Mars – complete with a miniature moving train that had images of Schwarzenegger beamed into its window). CGI is used sparingly, though even that element was pretty impressive for the Nineties.

30 years later, Total Recall’s themes of corruption, commercialism and strict class systems are still – unfortunately – relevant, but thanks to a brand new restoration of the movie undertaken by StudioCanal, its look has also been brought bang up to date.

From the opening shots of Mars, the time and effort that has gone into this new restoration is clear. The red, dirty sand that covers the planet clearly swirls around Schwarzenegger’s feet as he looks out on the vast planes of Mars. The movie could have been made yesterday. Bottin’s amazing makeup effects are also intricately clear, ensuring audiences are horrified all over again as to what happens when one steps foot on Mars without a suit; Schwarzenegger’s convulsing, face-bloating, eye-bulging reaction is as disturbing as it ever was.

This new restoration not only gives audiences a chance to revisit this sci-fi classic with their 2020 eyes and expectations, it’s also got a whole host of extras. From making-of featurettes that focus into those special effects and Jerry Goldsmith’s excellent score, there’s plenty for fans and newcomers to delve in to. Our favourite, though, has to be the exclusive documentary on Carolco Pictures, which puts a spotlight on the production company that brought us movies such as Terminator 2 and Rambo: First Blood, sinking in vast amounts of money until it invested everything in the movie that would eventually bankrupt it: Cutthroat Island.

Total Recall is a product of a perfect alignment of factors – a director who would masterfully spearhead a story that tackles deeply institutionalised ideals, a special-effects artist who would transport audiences to the red planet, a score that would underline the pulse-quickening action, a distribution company who would throw in wads of cash to make it all happen and now, the restoration it deserves. So what are you waiting for? Get your ass to Mars!