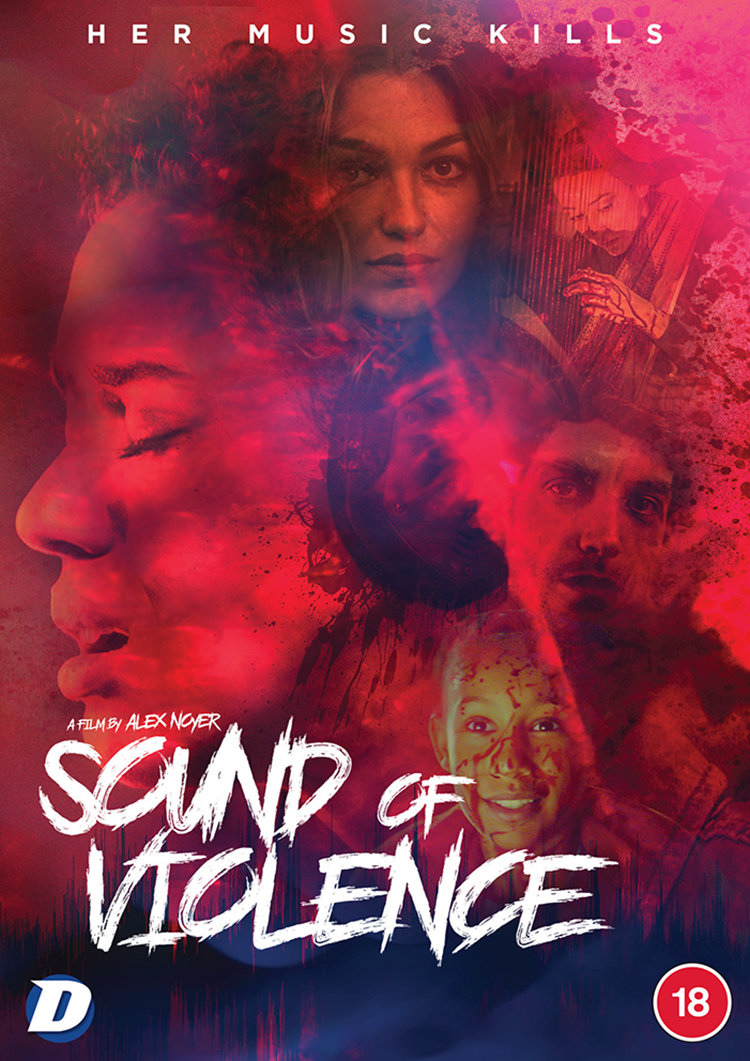 After losing her hearing as a child, Alexis Reeves finds it suddenly, viscerally recovered during the violent murder of her family in Alex Noyer’s Sound Of Violence.

Replete with a newfound ability of synaesthesia (the phenomenon of experiencing one sense through another), Alexis excels as a music teacher and composer, painting with experimental new sounds. Those new, healing sounds, however, can only be extracted from violent acts and when Alexis discovers that she might be losing her hearing again, she finds herself compelled to a murderous spree in a race against time to complete her masterpiece before it’s too late.

Over the past few years, the topic of hearing loss has made for good Oscar bait. Both 2017’s short film, The Silent Child, and 2019’s Sound of Metal picked up the little golden statue for their portrayal of the isolation someone who has lost their hearing can experience. Sound of Violence, however, has perhaps more in common with 1995’s Mr Holland’s Opus instead. The story of a frustrated composer who has to find fulfillment as a high school music teacher while raising a non-hearing son finds both movies telling the story of a tortured genius and the frustrations built from the paradigm of the artistry they embrace.

The tortured genius in question here is played Jasmin Savoy Brown, who gives an outstanding performance as Alexis. Portraying her as an aloof yet vulnerable outsider who is sensitive and passionate, she makes for such a sympathetic villain that even when the killing starts, you find yourself appalled at the acts but desperate for her to finish her work. Brown’s mawkish behaviour sees her unknowingly inserting herself into a confused love triangle with her best friend Marie (Lili Simmons) and her new conquest, Duke (James Jagger). Simmons’ and Jagger’s on screen romance is magnetic, pulling you into their world with innocent anarchy and when Brown’s Alexis gets caught in their field, the attraction is inescapable and inevitable.

Speaking on inescapable, this movie is not for the squeamish. Alexis’ torturous contraptions are reminiscent of something out of a Saw movie. Terrible and fantastic in their construction and purpose, when the instruments of death start to play their tune, the squelch of bone-splitting impacts are enhanced with a visceral scarlet spray of bloody demise. Indeed, the rhythmic driving beat that underpins Alexis’ compositions almost fuels the audiences’ own bloodlust, as the volume and tempo increase, we are left baying for the release that comes with the crescendo of each violent act.

With its humble origins of director Alex Noyer wanting to find a way to kill someone with a drum machine, Sound of Violence arrives as a fully formed, deeply complex and devilishly entertaining horror. The synaesthetic kills erupt on screen like the Northern lights on LSD, but it’s the quieter character moments that really hit home. Tortured arrogance isn’t easy to pull off and as the credits roll you are left with an emotional quandary and thumping desire to hear that horrifically beautiful sound again…

Sound Of Violence was seen and reviewed at the FrightFest festival. Dazzler Media presents Sound of Violence out now on Blu-ray, DVD & Digital. Find it on Amazon here and on  iTunes here

Sound Of Violence: Hear your worst nightmares with our exclusive teaser trailer

Sound Of Violence: Hear your worst nightmares with our exclusive teaser trailer