Released in the US as a sequel to Ovidio G. Assonitis’s horror Beyond the Door, Shock (which has an alternative title of Beyond the Door II) was renowned filmmaker Mario Bava’s last feature and it sure does live up to its name! Now, the Maestro of the Macabre’s chilling swansong disturbs like never before in this feature-laden release from Arrow Video and we have a copy to give away!

Check out the release below… 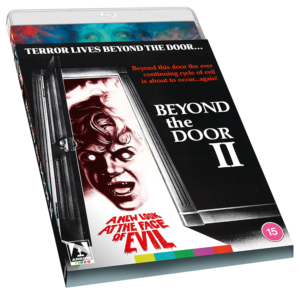 Shock follows Dora (Daria Nicolodi, Deep Red) who moves back into her old family home with her husband, Bruno (John Steiner, Tenebrae), and Marco (David Colin Jr., Beyond the Door), her young son from her previous marriage. But domestic bliss proves elusive as numerous strange and disturbing occurrences transpire, while Dora is haunted by a series of nightmares and hallucinations, many of them involving her dead former husband. Is the house itself possessed? Or does Dora’s increasingly fragile grip on reality originate from somewhere far closer to home?

Want to be in with a chance of owning the Arrow Video release Shock (Beyond The Door II)? Answer the simple question below…

This competition closes on 28 January so get those answers in now!

Shock (Beyond The Door II) will be released on 17 January 2022 from Arrow Video.

Please note: the previous question for this competition was incorrect. All previous entries will be entered into the draw to win, regardless of answer.

The Boys Season Two: Win the superhero series on Blu-ray

The Boys Season Two: Win the superhero series on Blu-ray