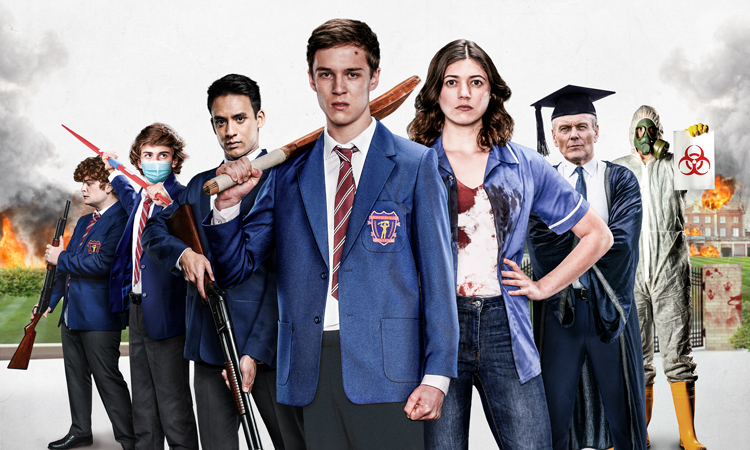 Young Lee Keegan (Oscar Kennedy) thinks the world is over when he’s expelled from St. Mark’s School for Boys, after pulling a practical joke involving a locker cabinet. However, little does he know the world really is over when no sooner does he get home than a mysterious virus spreads across the country, decimating the majority of the population, including his dad.

Alone and afraid, he decides to head back to the remote boarding school to stay safe. When he gets there he finds a few pupils (including best friend Sean played by Liam Lau Fernandez) still there and trying to survive. However, no-one really is safe in this new world and the school soon gets targeted by the local parish council who have formed a militia and is imposing martial law (lead by a local parish council leader/post-apocalyptic dictator played by Samantha Bond).

School’s Out Forever feels like a mixture of Shaun of the Dead and Lord of the Flies. As the dire situation settles in on the group of boys (and the hangovers wear off), the power play between them soon begins, culminating in a night of mayhem and bloodshed (and that’s not even taking into account the outside threat!).

The cast is great. Kennedy holds the film well as the cheeky but ultimate good guy Lee and Fernandez is sinisterly smug as the best friend-turned-warlord Sean. The adults aren’t letting the teenager have all the fun either; Samantha Bond is having a wonderful time weidling farmer’s guns and causing havoc, while Anthony Head is perfect as the pompous headmaster in a short but memorable role.

Not quite as funny as Shaun or as devastating as Lord, School’s Out Forever lives in a strange but likable middling ground that is masterfully kept throughout, never delving into overly gory horror or overly dumb comedy. This results in a film that may seem fairly by-the-numbers but will still surprise you throughout.

School’s Out Forever is available to own on DVD & Blu-Ray from 12 April. Read our interview with writer and director Oliver Milburn here.