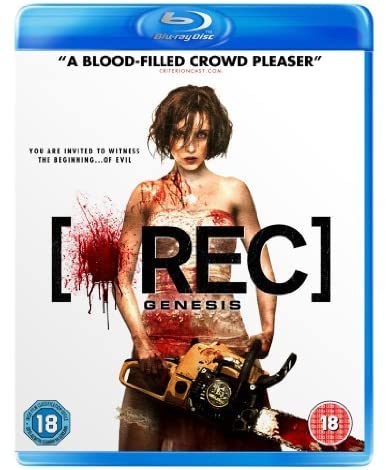 Modern zombie films can be frequently funny, frequently gory, and alas, frequently shit. Strangely tender they almost never are, at least until the world rediscovers Michele Soavi’s Dellamorte Dellamore, or Jonathan Levine’s Warm Bodies hits cinemas early next year. To get the obvious over and done with, [REC]³ Genesis is as much a sequel (or sidequel, or whatever it’s supposed to be chronologically) to 2007’s astoundingly dense and claustrophobic [REC] as Halloween III: Season Of The Witch is to John Carpenter’s original Halloween – it shares a name and a few glib references in the bare bones of the setting, but little else.

Confusingly in the case of [REC]³ Genesis, the found footage format doesn’t survive the first 20 minutes before it turns into a regular movie, which wouldn’t be a problem if found footage wasn’t in the name. The links with the earlier films, 2007’s [REC] and its reasonably worthy if overcooked sequel, 2009’s [REC] ², are also a weak point – the perfunctory references to the saggy-titted witch demon thing and the sinister Vatican conspiracy from the original film are at odds with the tone, which is largely unconcerned with the whole business of finding out what’s going on, but instead merely getting through it all.

Once the outbreak and the found footage runs its course with satisfying, if unimpressive, predictability, the tone of the film shifts radically and all pretence of [REC]³ Genesis being any sort of sequel/threequel/whatever gets slung into the canal like a sack of used nappies.

That joint directors/writers Paco Plaza and Jaume Balagueró went their separate ways after the second film to produce third films independently of one another – Jaume Balagueró’s numberless [REC] Apocalypse (they’re using Resident Evil naming conventions now, which is never a mark of quality) is still in the early stages of production – was probably an early sign that the two weren’t on the same page anymore, and Plaza’s [REC]³ Genesis suggests he’s started reading a different book altogether.

Deftly leaping between eyes-down survival horror, black comedy and sweet, off-kilter indie movie romance, the zombie outbreak hits during a wedding reception at a gated manor house, separating affable groom Koldo (Diego Martín) and his elfin bride Clara (Leticia Dolera). The two must make their way across the estate with a dwindling band of survivors, determined to reunite despite the insistence of each one’s set of co-survivors that the other is surely dead, dodging the booming hoards of running, scrabbling 28 Days Later-style infected, and more convenient shuffling Night Of The Living Dead cadavers, depending cynically on whatever’s appropriate to the pace at that particular time.

Dolera’s Clara eats up the bulk of the promotional material – along with a chainsaw that she brandishes for about six minutes out of the accumulated 80 – and she’s a superb combination of porcelain fragility and resolute determination, but similarly. the rubbery-faced, rom-com-lite Koldo puts on a master class in real-world sincerity and the frantic desperation of a nice guy under incredible pressure.

There’s a fair few scares – the degradation of the film’s Patient Zero, Uncle Pepe Victor (Emilio Mencheta), who appears sporting a bite on his hand and becomes increasingly eerie and pallid over the opening third’s festivities – a few chuckles – copyright-wary children’s entertainer, John Sponge, wearing a big foam Spongebob knock-off costume throughout, and some moments of gross-out, keg-tapping cheering to rival anything in Peter Jackson’s Braindead or Sam Raimi’s The Evil Dead II – a food processor to the face being a nice tribute to the former, and the panicked hacking of infected limbs a nod to the latter.

Mostly, though, [REC]³ Genesis is sweet and tragic, a peon to true love against the backdrop of a zombie holocaust – much in the same way that Titanic managed to be about a ship sinking and a love between social ranks, only less likely to make lonely housewives snot tears into their family sized Dairy Milk.