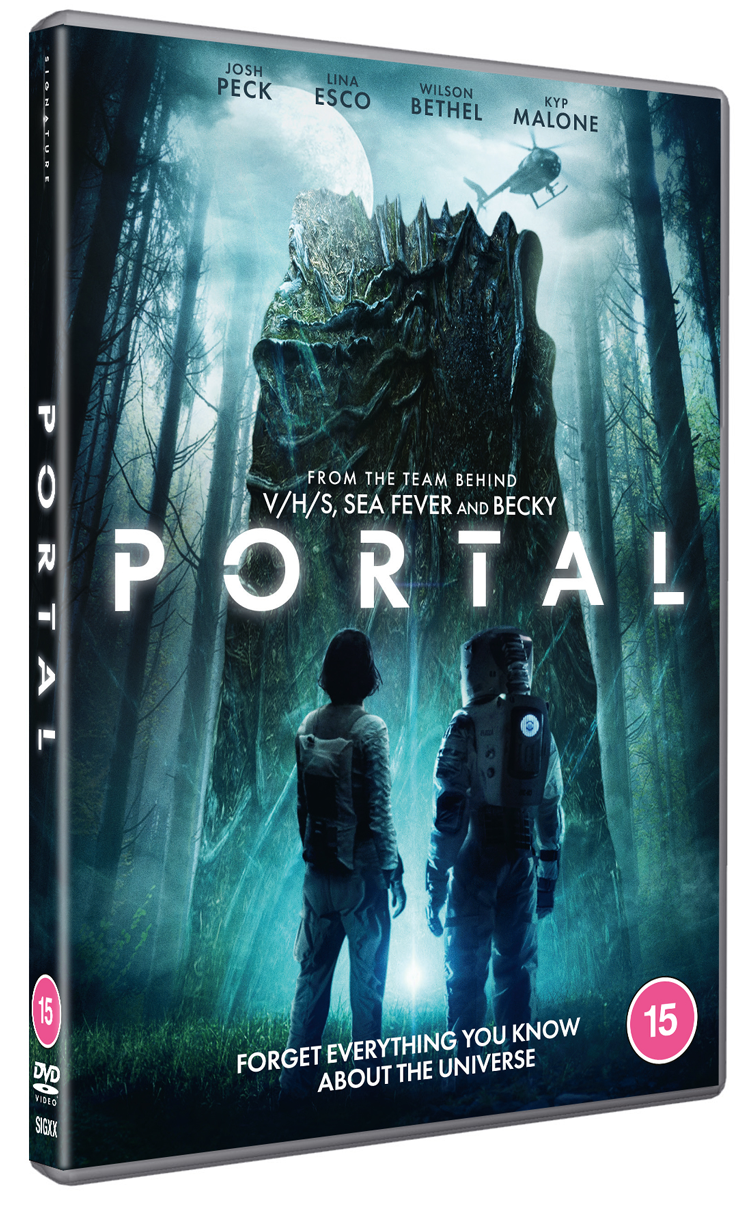 When we heard about a movie called Portal, we were worried that we were going to have to get very angry about a half-hearted Hollywood adaptation of the much-loved video game series. Thankfully we didn’t get that; instead, we got a weird and intriguing slice of semi-cerebral sci-fi, and Portal is certainly a puzzling film.

Except it’s really not one film at all – it’s four short films, each one with its own title and each written and directed by a different combination of people. They’re all connected by a radio host’s commentary and the alien phenomenon that we are introduced to in Lockdown, the opening short, where we see countless otherworldly doors suddenly start appearing around the globe. These mysterious portals, whose surfaces move and shift and which whisper into people’s minds, have caused millions of people to go missing and while some have come back, they’ve returned very different.

It’s an intriguing premise and having it told through four different narratives rather than one main story is an interesting approach, but both this and allowing a group of people to put their own individual creative stamps on each mini-movie are at once Portal‘s strength and weakness.

First, the good. This movie looks stunning – it appears to have been shot during our real-world lockdown and that has allowed the team to capture stunning shots of beautiful locations worldwide devoid of human life, which is perfect for a movie in which a vast portion of the population has disappeared from the face of the earth. It conveys the scale of the terrifying situation facing those within the film and makes the world of Portal feel frighteningly empty. Secondly, the sound design is superb. The noises made by the doors – strange alien groans and rumbles, distorted whispers and twisted human voices – will send a shiver down your spine. Their presence in the background of pretty much every scene makes you feel overwhelmed, like there’s no escape from them wherever you might try and run to. The soundtrack, too, is fantastic; at times ethereal and dream-like, at times electro and electrifying, with soaring synthwave blending wonderfully with the mesmerising visuals or contrasting sharply against lush natural scenery. As an audiovisual experience, Portal doesn’t disappoint.

The biggest problem with Portal is that it is book-ended by arguably its two weakest chapters, delivering an opening story that is intriguing as an introduction but ends up being slightly dull and predictable. Then with the final chapter, Interstitials, ending on a disappointing note which seems at odds with the rest of the film, it feels like it drops the ball after the previous two chapters did so much to build up a fascinating world

That’s a real shame because those middle two stories, Knockers and Lamaj are very good. They do all of the heavy lifting in this movie and, in fact, we’d go so far as to say that Knockers is where the film peaks. It’s the most exciting, interesting and unsettling portion of the movie and it had us enthralled all the way through. If the whole of Portal had expanded on that section of its story and extended it to feature-length, we’d have been extremely happy.

Portal’s idea is solid and there are some very intriguing concepts but they end up being wasted. It almost feels like no one knew how to bring the story to a satisfactory conclusion, so they didn’t. Portal looks great and the soundtrack is superb but its stories are inconsistent in terms of quality and that affects your enjoyment of the film as a whole. As a result, Portal ends up feeling like a rather average experience overall.

Portal is out now on DVD and digital platforms from Signature Entertainment.