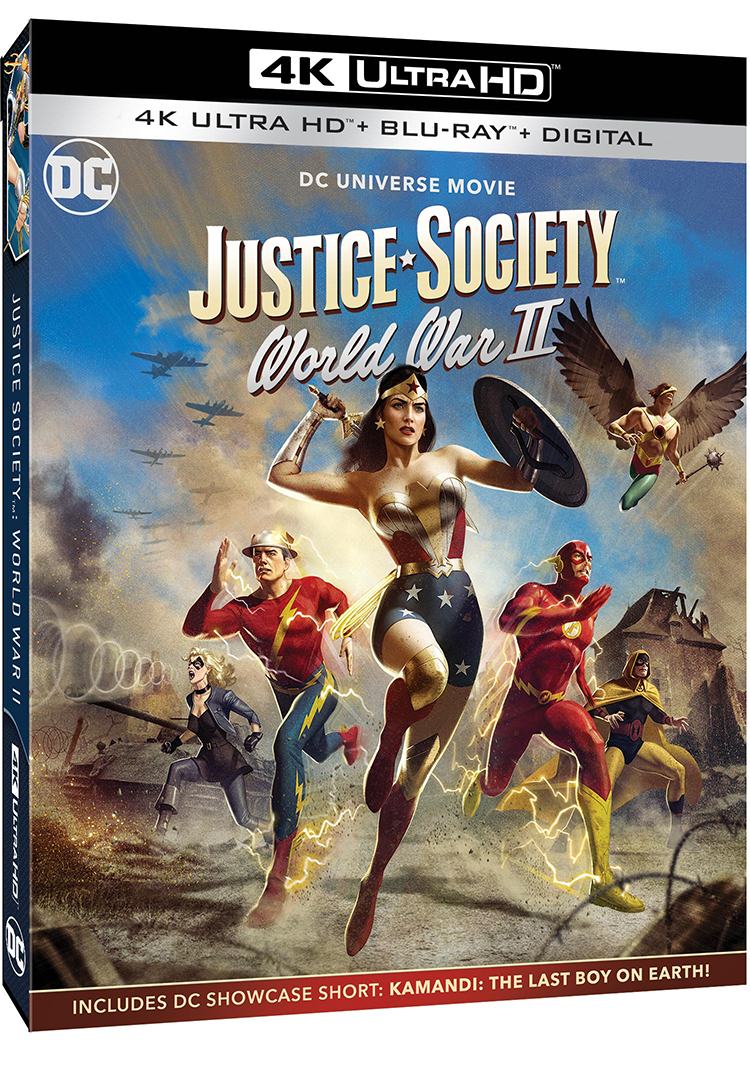 Barry Allen, aka The Flash just can’t stop (which is pretty standard for the Flash) in Justice Society: World War II. Even when he goes for a picnic in Metropolis with his beloved girlfriend Iris West, he can’t help interrupt their romantic rendezvous to put on the red super-suit and save the day for those in trouble.

This time, however, it just so happens that to save the world The Flash has to do what he does best and run really really fast. Unfortunately, he runs a little too fast and appears to have run back in time, arriving slap bang in the middle of the Second World War in front of a hail of Nazi bullets.

Understandably a little freaked out, Barry gets out of the line of fire, only to discover a band of unfamiliar costumed adventurers, led by Wonder Woman, coming to the aid of the Allied forces. Unable to sit still yet again, he joins a new fight to once again tries to save the day and hopefully make his way back home.

When settling into the latest DC animated movie, it helps to bear in mind that this is not a Justice League movie, this is the Justice Society Of America, the predecessors to the Justice League. A group of superheroes who have long been forgotten/erased by history. Led by everyone’s favourite Amazonian princess, Wonder Woman (Stana Katic), Justice Society: World War II works to bring a whole new (albeit old) roster of heroes to the fore. While some viewers may recognise the (re)appearance of Hawkman, Black Canary and Jay Garrick’s tin-hatted Flash, writers Jeremy Adams and Meghan Fitzmartin have clearly had a ball raiding DC’s back catalogue to introduce Golden Age heroes like Hourman to the adventure.

This departure from centring a movie around DC’s usual Big Three really helps to introduce a new dynamic to the DC animated universe. Although a time-travelling Flash is definitely something we’ve seen before, JS:WWII does it with a younger, more naïve Barry Allen (Matt Bomer), who’s still very early on in his career as a hero. Playing Barry as the fish-out-of-water gives the story a chance to really showcase some previously underdeveloped (in animation) characters. Elysia Rotaru’s Black Canary and Omid Abtahi’s Hawkman are particular stand outs, with personal emotional beats that still manage to hit heavy within an ensemble adventure. Not forgetting those who are lycra-less, Wonder Woman’s right hand man of action Steve Trevor (Chris Diamantopoulos) also shines as the noble, devil-may-care lovestruck cavalier.

Fans of alt-history will certainly enjoy the sight of Wonder Woman kicking Nazi butt, but the story really shifts into high gear when the Atlanteans join the fray. Led by an Aquaman with a bit of a (fish and) chip on his shoulder, we again witness some story arcs familiar to DC aficionados. However, by setting the board with an unfamiliar cast of characters we get to watch events play out with a new set of stakes and unpredictability.

Despite being billed as a standalone movie, Justice Society: World War II arrives as a perfect follow up to 2020’s Superman: Man Of Tomorrow. It wonderfully embodies the inspirational charm from a Golden Age era where heroes had noble values, and audiences can lose themselves in simply watching the good guys beating mammoth odds (and Nazis) to save the day.

That’s not to say there’s a lack of depth. Indeed, by resetting the clock to tell stories earlier on in the characters’ careers, the tone isn’t weighed down by the burden of long, complex backstories. DC has a deep bench of characters and it’s a real delight to see these Golden Age characters brought to the screen in a more classic representation, eschewing the trend of the Eighties’ penchant for darker, more realistic reimaginings.

In fact, Justice Society: World War II embodies what seems to be a new trend for this latest era in DC animation of keeping the plot relatively straightforward, meaning we get to spend more time discovering just how much fun our grandad’s heroes really were.

Justice Society: World War II is out now on digital, DVD and Blu-ray.

Fantasy Island: What dreams may come

Weathering with You review: Steal My Sunshine
< Previous
Next >

Fantasy Island: What dreams may come

Weathering with You review: Steal My Sunshine