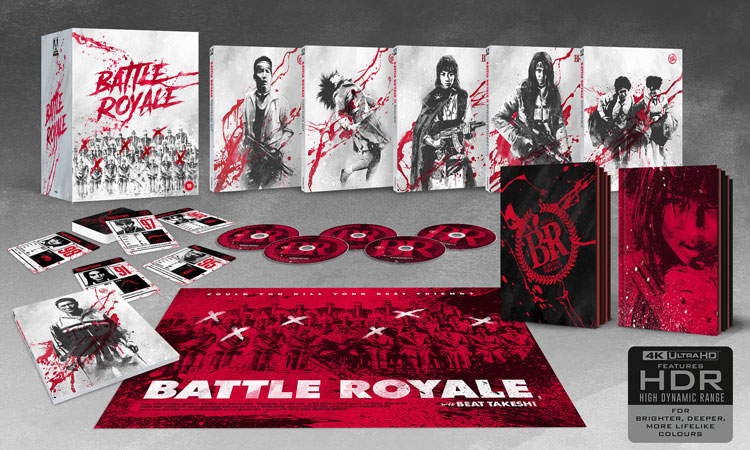 Based in an alternative dystopian Japan, Kinji Fukasaku’s Battle Royale is set in a world where the government has passed a law named the ‘BR ACT’ in an attempt to rid of disobedient youths (it’s a bit harsh… but go with it!).

In line with the new law, a class of 42 students from the ninth grade are captured and sent to an island, where they must participate in ‘Battle Royale’. Having been fitted with explosive collars to force them to partake, the students are sent off with food, water, and a variety of weapons to battle for their lives over the course of three days (otherwise everyone is killed) until one final survivor remains.

Though audiences may recognise the story’s key elements and moral dilemmas from both Lord Of The Flies and The Hunger Games series (released 12 years after Fukasaku’s movie), Battle Royale is an entirely different beast. Predominantly in its use of dark humour and shocking violence, which is apparent during the movie’s first 15 explosive minutes.

Despite the harsh brutality that ensues (for instance, some students decide it’s better to off themselves rather than participate), Fukasaku handles the issue well by not allowing their plight to feel overly cruel or distasteful. To achieve this, the main characters are all given sufficient screen time through a range of flashbacks and genuinely touching moments, which only amps up the tension when returning to the chaos.

Although potentially polarising for some audiences, Battle Royale manages to strike up the right balance of heartache, humour, and bloodshed in an unforgettable experience. 21 years after its initial release, it remains of the most ground-breaking pictures to ever come from Asian cinema. This would sadly be Fukasaku’s final film (his son Kenta Fukasaku, who wrote the screenplay for Battle Royale took over early in production and would go on to write and direct the sequel Battle Royale II: Requiem), but what a legacy to leave behind.

Now that legacy lives on with the movie receiving its very own UHD restoration in a new 4K Ultra HD limited edition box set. Not only does the new release include the fully restored 4K versions of Battle Royale’s original Theatrical and Director’s cut, and a Blu-Ray and extended cut of Requiem, but the five-disc set also includes behind-the-scenes featurettes, a soundtrack CD, an exclusive collectors’ Trump Card set and much more. Let the blood-soaked binge-watch begin!