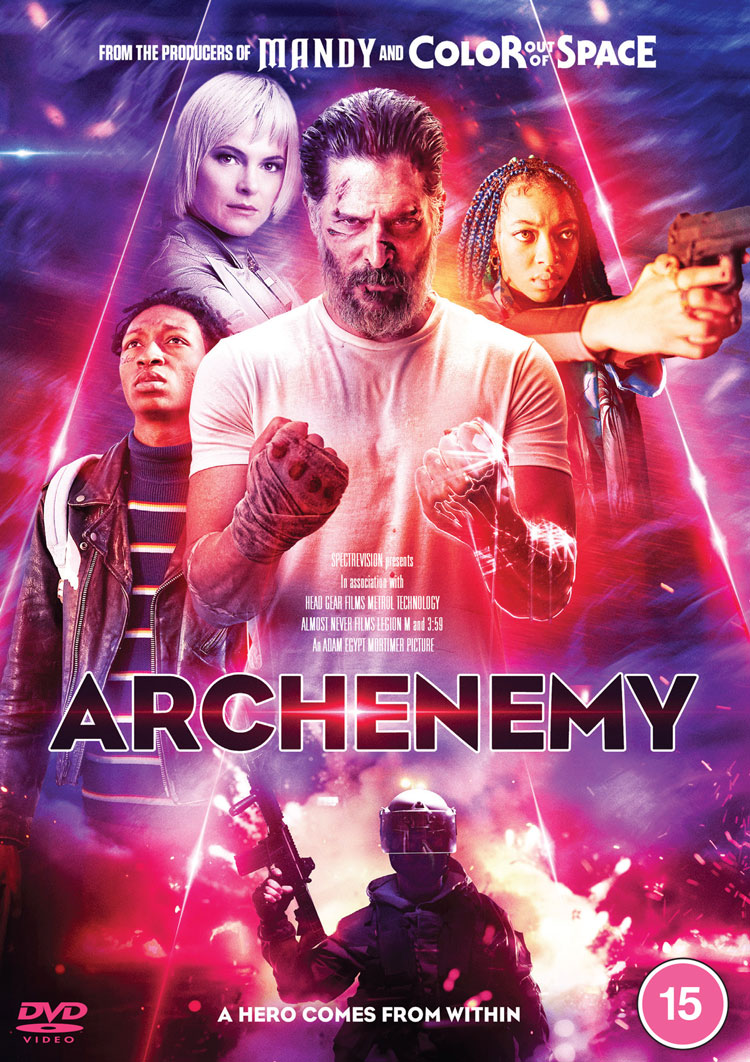 Superhero movies have been around for what seems like forever and they’re never going to go away because we’re never going to get bored of them. Even so, we do appreciate it when people try to put a fresh spin on things to keep the whole genre interesting. Sometimes those attempts don’t quite work out, but for every Hancock or Brightburn there is a Kick-Ass and now we have Archenemy, the latest offering aiming to deliver something fresh and different for superhero-hungry fans.

Archenemy tells the tale of Max Fist (Joe Manganiello, True Blood), once the saviour of Chromium city and now a homeless, alcoholic drug addict living on the streets of an unnamed city on Earth, dumped here after a battle with his arch-enemy and her doomsday device, left power-less and hopeless. At least that’s the tall tale he’ll tell anyone willing to stump up for a whiskey and pull up a chair, and that includes young Hamster (Skylan Brooks, Empire).

With their parents dead, his big sister Indigo (Zolee Griggs, Wu-Tang: An American Saga) is selling drugs for bad guy The Manager (Glenn Howerton, It’s Always Sunny in Philadelphia) to raise money for Hamster to go to college and to give them both a better life. Hamster, meanwhile, is desperate to get a job with social media giant Trendible and Max’s far-fetched flights of fantasy end up being perfect internet fodder when the two strike up an unlikely friendship. Of course, when bad guys with drugs and guns are involved, things are bound to go wrong and soon brother and sister find themselves in deep and Max needs to step up and become the hero he always claimed to be.

From its animated opening sequence to its thumping score, Archenemy immediately impresses and, stylistically, this film delivers in a big way. The animated elements return periodically throughout the movie and they always look incredibly cool. Archenemy also makes the most of its superhero concept to deliver additional visual flair, like the words from Hamster’s monologues appearing on buildings or in the sky. These touches definitely give Archenemy a look and feel all of its own and the whole film is beautifully shot and presented. It’s very well-acted too, with strong performances all-round. It seems like such a strong formula, and yet…

We went into Archenemy wanting to love it but we came away merely liking it. The idea is impressive but, somehow, the execution is lacking – there’s just something missing, and that something special can instantly turn an okay film into a great one. Archenemy takes the time to tell its story but ends up feeling like it hasn’t really said that much at all. That also means it takes a while to get going and, by the time it does, it’s over just as quickly. There’s not really that much action, it never really feels that exciting or intense. The whole experience seems like a case of style over substance, which is actually frustrating because, individually, the elements feel strong, but somehow when you put everything together it just doesn’t blend.

Archenemy is not a bad film, there’s plenty to like here and there were a lot of aspects of the movie that we really enjoyed, but rather than leaving us on a high – or even a low – it just left us. It’s a movie that dares to do something different to stand out in a crowded marketplace and that’s worthy of praise but, sadly, there’s nothing overly super about it.

Archenemy is out now order today: bit.ly/ArchenemyUK  or be in with a chance to win a copy with our Archenemy competition bundle here.