To mark the release of the film POSSUM now playing in cinemas nationwide and on demand, we have a limited edition signed poster, official CD soundtrack, t-shirt and book featuring the original short story.  To find out where you can watch POSSUM, click here.

POSSUM is the debut feature film from writer/director Matthew Holness, co-creator and writer/star of the cult TV series Garth Marenghi’s Darkplace. Starring Sean Harris (Mission: Impossible, Southcliffe) and Alun Armstrong (Frontier, Get Carter), POSSUM is a distinctive psychological thriller which pays homage to the British horror films of the 70s. The film’s unique and stylish exploration of a man’s isolation and abandonment is accompanied by a compelling soundtrack from the legendary electronic BBC music studio The Radiophonic Workshop. The film is based on the short story Possum written by Matthew Holness and published in ‘The New Uncanny’ anthology.

The story follows disgraced children’s puppeteer PHILIP (Sean Harris), returning to his childhood home of Fallmarsh, Norfolk, intent on destroying Possum, a hideous puppet he keeps hidden inside a brown leather bag. When his attempts fail, Philip is forced to confront his sinister stepfather MAURICE (Alun Armstrong) in an effort to escape the dark horrors of his past.  See the trailer here:

For your chance to win the following bundle, answer the question at the bottom of the page. 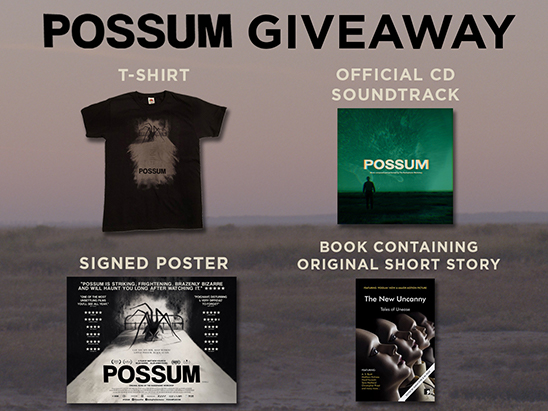 (UK residents only)  Winners to advise on size of T-shirt either large or small.

Possum is in UK cinemas and available on video on demand now. Get all the latest horror news with every issue of SciFiNow.