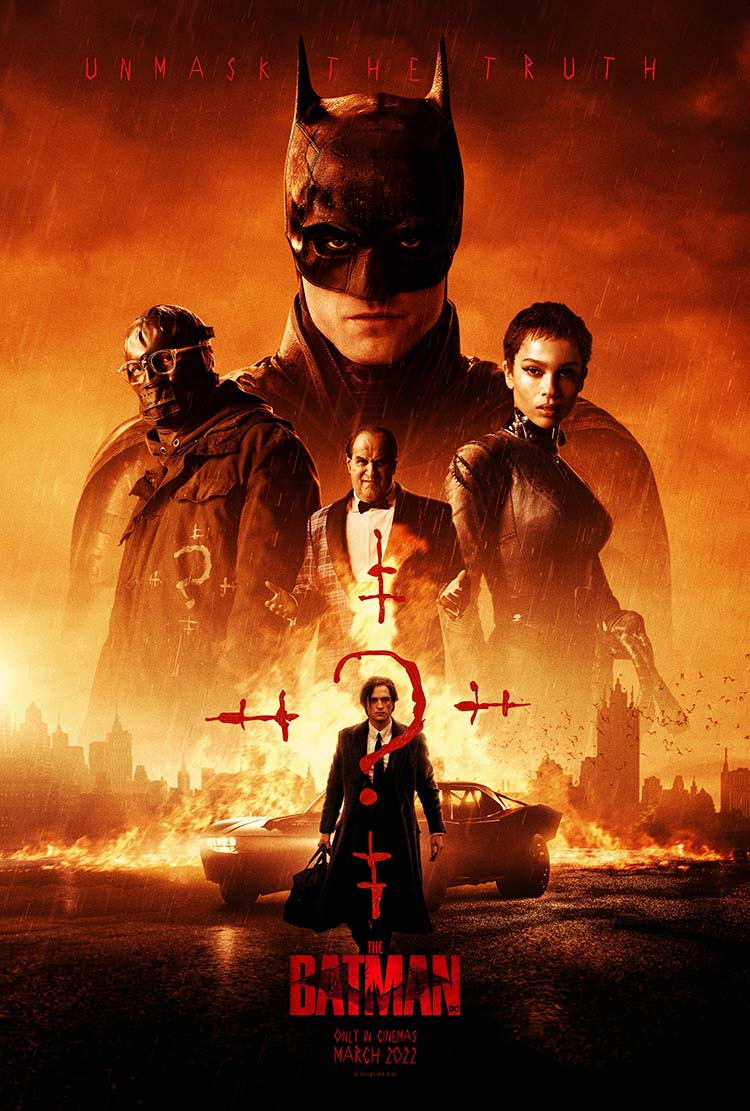 In Matt Reeves’ latest Batman offering, Bruce (Robert Pattinson) has become something of a night owl, ignoring most of his obligations as heir to the Wayne legacy by day in favour of exacting vengeance on the criminals of Gotham City as his alter-ego, Batman, by night. So when a new criminal starts murdering key officials from the city’s highest ranks, and leaving notes for The Batman with the bodies, Gordon (Jeffrey Wright) brings The Batman in to try to figure out who is behind these crimes.

The film gets off to a slow and slightly tedious start, taking far too long to get going and lingering too long on some shots that – while beautiful – are not moving the story forward. However, once the investigation into these murders deepens, the pace picks up and the film gets really fun. The mystery itself is a compelling one and the action soon starts to kick up a notch. Just when you think there might be a mid-film lull, it becomes impossible to look away.

The Batman is a visual mix of striking imagery and out-of-focus shots that made us feel like we’d forgotten to put our glasses on. Some of the shots are so perfect you might feel the urge to stand up and applaud their brilliance. It’s a visual spectacle designed to be enjoyed on the biggest screen you can find – a treat that only adds to the wow factor of some really impressive action sequences (a particularly spectacular chase sequence is a real highlight).

It’s also at this point that we start getting to know the story’s key players. Zoë Kravitz is phenomenal as Selina/Catwoman, bringing a level of ferocity and nuance to her role. Her scenes with Pattinson are particularly strong as the two of them bond over their mutual past traumas and try to figure each other out. When Batman has one-on-one time with Catwoman or when he’s interacting with Gordon, it’s brilliant. The dialogue is sharp, the chemistry is electric and you feel their shared need to right wrongs. Sadly, Andy Serkis does what he can as Alfred but he is criminally underused.

Then it comes to what feels like a good and solid ending. And then it keeps going. And going. There are a handful of times when it feels like this might be the ending but it takes so long to get to the actual one that by that point you’re just a bit discombobulated. And as the ending we get nicely sets up further story opportunities in this version of Batman, we can’t help but wonder why so many threads were kept in there when they could have been left for future outings.

The Batman absolutely doesn’t warrant its almost three-hour runtime and could easily have lost about half an hour, at least. There are too many moments of tonally-off hilarity (which we’re not entirely convinced were meant to be funny) and Bruce’s emo look is so distracting as to often take you out of the scene completely. There are also moments of complete idiocy on the part of some characters that will have you wanting to scream at the screen in frustration.

That said, when it’s good, The Batman is phenomenal. And yes, we had an absolute blast.

The Batman in cinemas 4 March

Shang-Chi And The Legend Of The Ten Rings Review

Shang-Chi And The Legend Of The Ten Rings Review