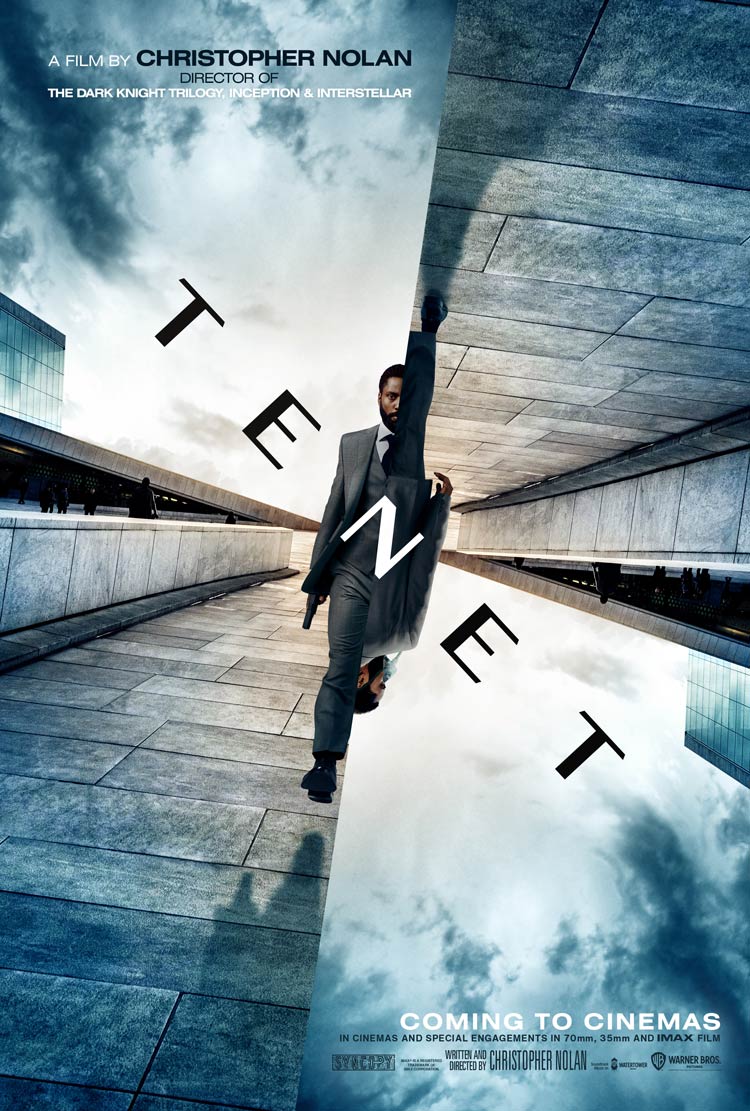 It’s always tough when a film has a lot riding on it. Be it part of an established franchise like James Bond or a long-awaited sequel like Bill And Ted Face The Music (both of which were due out this year and the latter opting for a dual release of cinema and on-demand). Tenet, though, has been dubbed with having the weight of the future of cinema on it. Oof, now that’s a lot of pressure.

It’s good, then, that Tenet is a film that benefits from a cinematic viewing. Though you would, and should, expect that from a Christopher Nolan film – a writer and director who has brought such sights to cinema that you can’t help but be sucked into the magic that the platform offers. True to form, Tenet really does look great – from large cinematic landscapes, to throat-catching fight scenes and an epic reversing and re-reversing (we’ll come to that later) war-like set piece – you can’t beat the cinematic experience.

Indeed, we’re certainly asking too much for Tenet – as if it wasn’t enough to entertain the majority of viewers and get audiences to part with the price of a ticket but now it has to lure people away from their homes during a pandemic and save cinemas? Tough job! This is why it’s imperative to stress the importance of personal preference of the cinema experience when it comes to Tenet. If it’s action and large-scale, wide-spanning shots of beautiful scenery that draws you to the cinema, then this is for you. However, if it’s the power of a strong story and the complex characters within it that parts you with the cost of a cinema ticket, then perhaps Tenet won’t fulfill that need.

“Don’t try to understand it – feel it,” says scientist Clémence Poésy at the start of Tenet as our protagonist (named the Protagonist – John David Washington) is introduced to a backwards (or ‘inverted’) bullet. This is the part of a movie where you expect the ideas to be explained. But it never comes. Washington deftly nods his head as bullets fly back into his gun, seemingly okay that it’s never explained as he goes on to risk his life to prevent a Cold War-esque threat to humanity (that’s worse than Armageddon apparently) at the hands of Russian arms dealer Andrei Sator (Kenneth Branagh). Along the way, he enlists the help of Sator’s estranged wife, Kat (Elizabeth Debicki) and Neil (Robert Pattinson), who is handy when needing to meet the right people.

It’s Debicki that stands out with her performance here, bringing a rare element of humanity (weirdly enough – seeing as it’s about saving humanity) as a mother trying to escape a brutal marriage. Washington and Pattinson, though charismatic as all hell and given a couple of zinger one-liners, are not allowed any deeper character development. They seem to automatically be going through the motions – blindly riding the wave of a plot that jumps up and down with almost robot-like inevitability, and it’s hard to root for characters when you can’t fathom why or how they take the paths they do (and those you do understand seem to only be there for plot progression… or regression… we’re not sure…).

To say Nolan’s plots are generally non-linear is an understatement – though this usually works to great effect. But while films like Memento or Inception are weighed by an idea that keeps audiences anchored in place – bewildered but along for the ride – Tenet’s feels like it’s slipping through your fingertips. Just when you think you’ve grasped one of the concepts, you lose it, resulting in a feeling of frustration.

Perhaps such a stunning and original film should have a higher rating but we just couldn’t help but miss that satisfying ‘ah!’ that you find in pretty much all of Nolan’s other films, when an intricate plot has been proudly unravelled. Trying to grasp the concept took us too far away from the sophisticated action sequences and beautiful backdrops to be beguiled by them. But if you’re okay with, like our characters, blindly following the spectacle of time manipulation (not time travel we’re told… this is definitely not about time travel) then you will enjoy Tenet because it really is a spectacle. A dazzling, confusing spectacle.

Tenet is out in cinemas now from Warner Bros.

Onward new trailer is good in a crisis

Bleach first look review Fantasia 2018: can the live-action movie live up to the manga?

Maze Runner: The Death Cure film review: does the YA franchise go out with a WCKD bang?