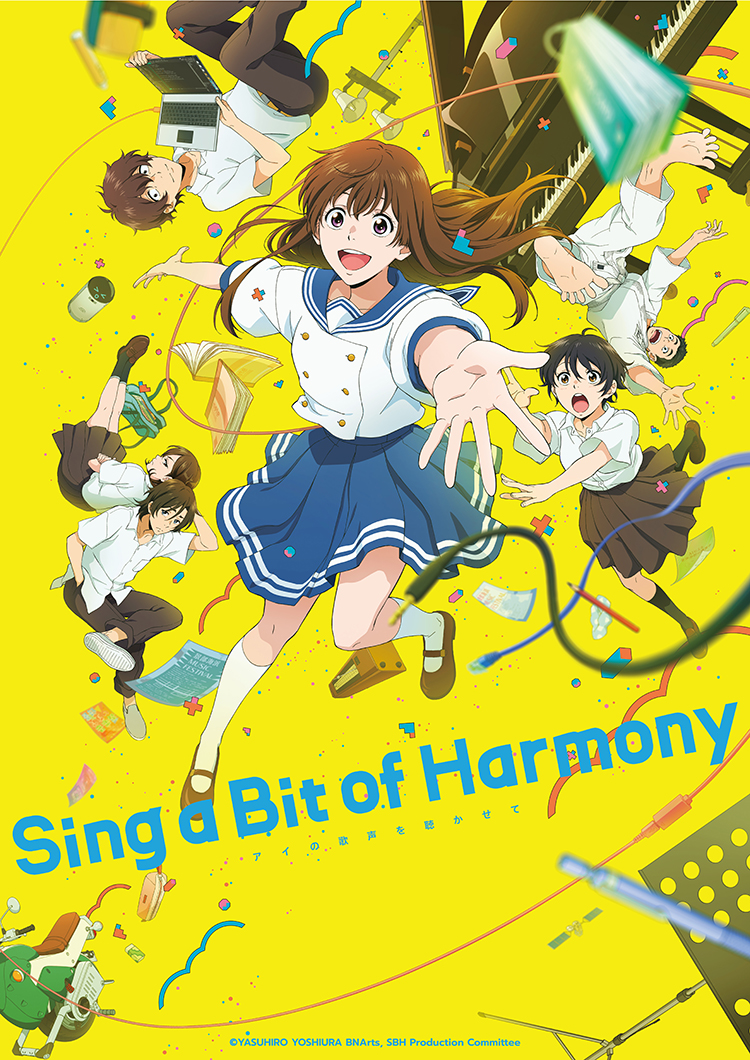 When you think AI, you probably think of Steven Spielberg’s eponymous offering, Skynet’s war on humans, or, keeping it anime, 2021’s superb Vivy: Fluorite Eye’s Song. But, while most AI sci-fi focuses on the inevitable machine uprising against their fleshy masters in the distant dystopian future, Yasuhiro Yoshiura’s anime Sing A Bit Of Harmony instead shows us a far more realistic and appealing near-future.

There are self-driving buses, experimental robot farmworkers, and automated rubbish collectors that look like motorised bins with cute LED facial displays. None of its AI technology feels too far beyond the reach of what our real-world tech is leading towards.

Oh, apart from Shion, the robotic teenage girl who’s secretly trying to be passed off as a real girl in the local school by a team at the AI-focused Hoshima corporation, that is…

It’s fair to say that Shion hasn’t quite nailed the art of being human; further compounded by her tendency to burst into song at random moments, like some sort of robotic Disney princess. Except that this isn’t a Disney movie, so her singing is often painfully awkward, and the second-hand cringe is real as her classmates wonder just what on earth is going on. Luckily for us, every song is an absolute bop, and they’re just a part of what gives Harmony so much heart and appeal.

Shion’s classmate, Satomi, quickly figures out that the new girl isn’t all that she seems, and she’s not the only one, which is bad news. The schoolgirl experiment isn’t exactly above board, and with Satomi’s mum at the helm of the project and surrounded by people who are less than pleased to see a woman so high up in the male-dominated Hoshima company, they’re all looking for a way to bring her down.

The problem is, Satomi isn’t exactly miss popular and doesn’t have much in the way of friends aside from the geeky Toma. So trying to keep Shion’s secret safe with cool guy Gotchan, icy Aya and judo nut ‘Thunder’ isn’t going to be a walk in the park.

But while Shion’s musical outbursts might seem unwelcome, they have a habit of really getting to the heart of the matter at hand. Whether that’s patching up a lovers’ tiff between Gotchan and Aya or helping Thunder find his rhythm, for someone who’s not human, Shion certainly knows how to read the room and work out exactly the right thing to sing. Through Shion, the group grows close, and this is a story about friendship, being true to yourself, true to your heart, and finding happiness. And you will find happiness with Harmony because, much like Shion herself, it hits all the right notes.

The songs are a delight, and the movie has heaps of humour to offer, but it’s the quiet moments where the characters talk intimately with each other that really give the film its heart. At one point, a painfully visceral exchange between Satomi and her mum rips you out of the safe and sugary song-filled stupor that you were enjoying mere moments before. It’s these scenes that make Harmony‘s 2D cast seem so much more real, and they give this film way more depth than you might have ever expected.

Harmony‘s world might be full of AI, but its story is very much a human one. The scariest thing in this movie isn’t the robots, it’s the people – they’re its villains, but they’re also its heroes. If Shion bringing her classmates together and turning them into friends doesn’t make you feel warm and fuzzy by the time the credits roll, you’ve got less heart than a Roomba.

Sing A Bit Of Harmony is out now in cinemas from Funimation.