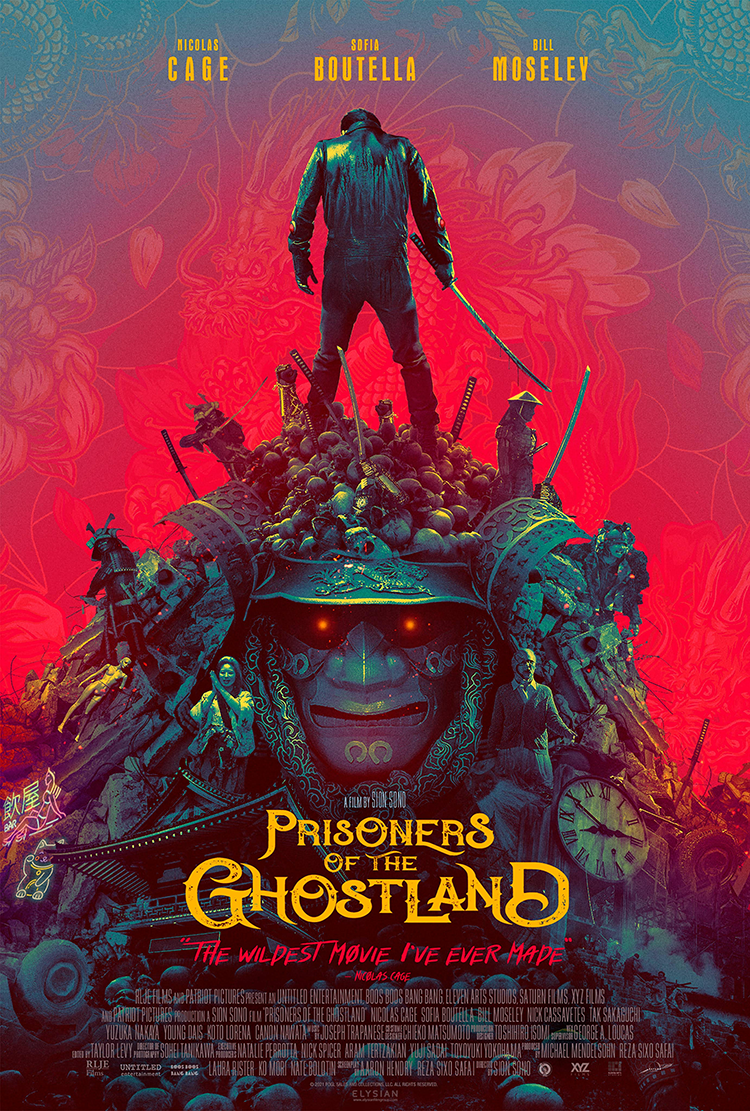 Nicolas Cage’s movie career has been an interesting one. He’s gone from being a high-tier star, making big-budget blockbusters (The Rock, Face/Off), to appearing in a few less prestigious releases (Knowing, The Wicker Man), and now he seems to be taking on any film which is offered to him, with mixed results. Sometimes, we get a Mandy, or a Color Out Of Space, while other times we get a Prisoners Of The Ghostland…

In a post-apocalyptic world, a Colonel Sanders-lookalike called The Governor (Bill Moseley) rules over a town that is part wild west and part ancient Japan, where cowboy hats and kimonos sit side by side. In the town jail sits Hero (Nicolas Cage), who at the beginning of the film is anything but, having been arrested for robbing a bank and killing numerous hostages.

However, he’s just the man for The Governor’s job. His granddaughter, Bernice (Sofia Boutella), has gone ‘missing’ (that is to say, she’s escaped), and he wants her back. To make sure Hero gets the job done he’s locked into a suit equipped with numerous explosive devices rigged to explode at random if he gets too rough with her and set to detonate all at once if he fails to bring her home to grandpa within five days.

Out on the road, a ghostly encounter with some spectral bad guys leaves him trapped in the titular Ghostland, a shantytown that looks straight out of Mad Max, complete with an unhinged cast of bizarre characters. And so the race is on to find Bernice, get her back, and free the people from the tyranny of The Governor…

If this seems like a great idea for a movie on paper, that’s because it is, but the reality is very different. It may sound like a fast-paced, exciting action-thriller but the pacing is painfully slow, and there’s no real sense of drama or excitement – even with Cage’s explosive suit.

Moreover, the plot is convoluted and the script is dry. Still, we could forgive all of that if Prisoners was enjoyable or entertaining, but it isn’t. It did make us chuckle a couple of times, but that was just down to how absolutely ridiculous those moments were.

Now, we love a weird Nic Cage movie; weird can be good, weird can be great, but even a weird film needs to be more than just that, and Prisoners feels like it’s weird for the sake of being weird. It’s a fever dream that makes almost no sense at any point. It’s one hour and forty minutes of you just sitting there and thinking: ‘Wtf is going on?’. A man in a top hat turning people into living mannequins; a rat man and his crew of scavengers; and someone being wheeled along in what looks like a mobile library are just a few of the film’s many strange moments. At one point in the movie, Nic Cage examines the two bombs located at his testicles and exclaims: “Really…?”, a sentiment we echoed many times while watching Prisoners.

Cage describes Prisoners Of The Ghostlands as: “The wildest movie I’ve ever made,” but it’s wildly disappointing. Perhaps this movie is deeply allegorical; perhaps it has multiple layers of hidden meanings, or perhaps it is just a nonsensical mess. The mix of Eastern and Western cultures and influences is an interesting one, and Prisoners deserves praise for its haunting, ephemeral score, while its otherworldly visuals are truly striking, but beyond that, there’s little else to enjoy.

Prisoners Of The Ghostland is out now at cinemas and on digital.

Prisoners Of The Ghostland: Nic Cage is a leather-clad badass in new trailer

Prisoners Of The Ghostland: Nic Cage is a leather-clad badass in new trailer