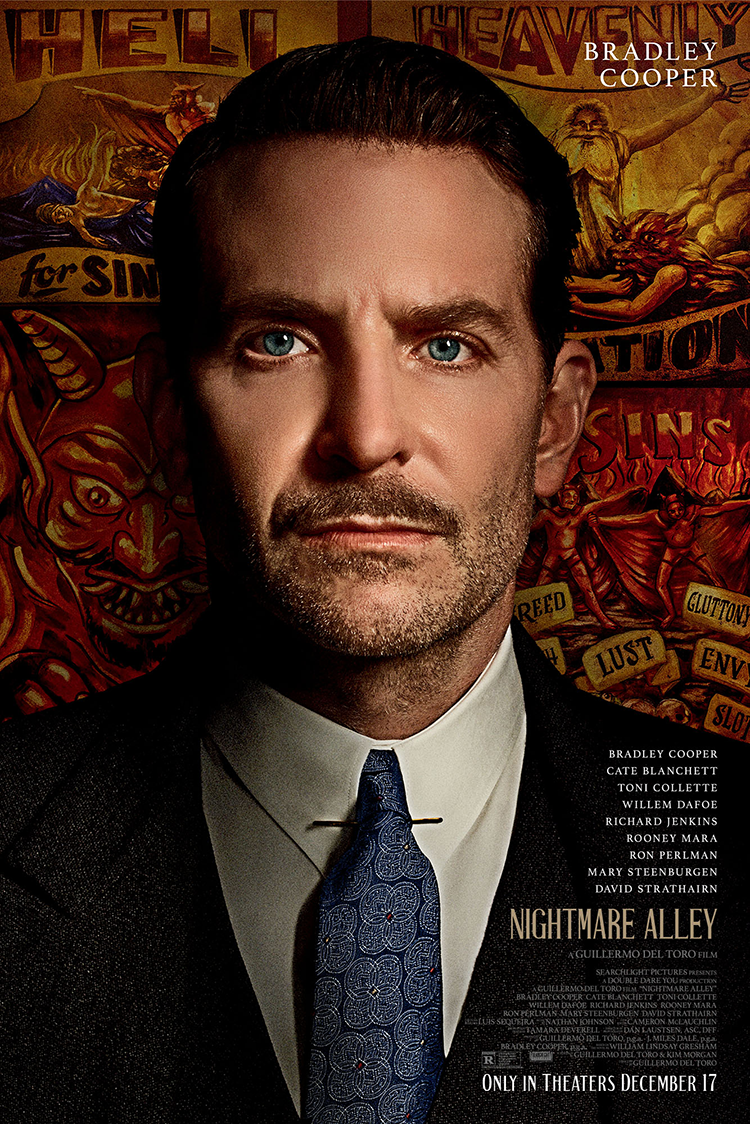 Otto Preminger’s suspenseful film noir follows a con-man who falls for a sultry thief and falls prey to a morally dubious scheme.

Guillermo del Toro steps away from fantasy following the Oscar-winning The Shape of Water for a star-studded neo-noir that starts in depression-era America and continues through WWII with Nightmare Alley. With this adaptation of William Lindsay Gresham’s 1946 novel, co-written with Kim Morgan, del Toro locates the horror of humanity with a dark and menacing tale of unquenchable greed and ruthless ambition. It’s worth noting that this isn’t a remake of the 1947 film starring Tyrone Power, even if you may spot the actor’s daughter, Romina Power, in a small role here.

Bradley Cooper stars as huckster and manipulative mentalist Stanton, who falls deeply in love with carnival performer Molly (Rooney Mara). Stan is introduced to the circuit by Willem Dafoe’s crafty circus ringmaster and an endearing psychic double act played by Toni Collette and David Strathairn, before his high aspirations take him off to the big smoke with Molly by his side. In Buffalo, New York, he becomes embroiled in a morally dubious get-rich-quick scheme with an enigmatic psychiatrist played by Cate Blanchett and vicious business tycoon Ezra Grindle (Richard Jenkins).

Del Toro’s world-building is exquisite and astonishingly stylish – as are the glamorous 1940s threads designed by Luis Sequeira. The director’s use of period specific built sets of architecture and off-kilter camera angles creates a cold and oppressive ambience. He places his characters in large empty rooms, twisty rides and long corridors in which they are forced to confront themselves and the choices they make. In the carnival setting the ‘House of Damnation’ features a tunnel filled with swirly eyes that bore into the soul; an image used multiple times as Stan makes his rise in the entertainment world.

The performances in this gritty neo-noir are all precise and calculating in the big city setting. Blanchett in particular, with her sultry purring voice and cool temperament is a great match to Cooper’s hypnotically silent sneers and tells. The circus folk, including the characters played by Mara and Collette, switch between charming and vulnerable, yet when pushed to the edge electrifyingly irate sparks ignite through their captivating performances.

It’s tempting to read Nightmare Alley’s brutal exploration of the meaning of success as a metaphor for Hollywood and there are elements of that, but really, this is a film that looks to the ills of wider society and the Trumpian American Dream. Behind the thick, smoky cinematography by Dan Laustsen and the fiery symbolism in which truth is repeatedly burnt to ashes, lies a visceral, rage-filled gut-punch of a picture and damning reflection of modern times.

Nightmare Alley will be in UK and Irish cinemas on Friday 21 January. Find out more about new cinema releases at SciFiNow here.