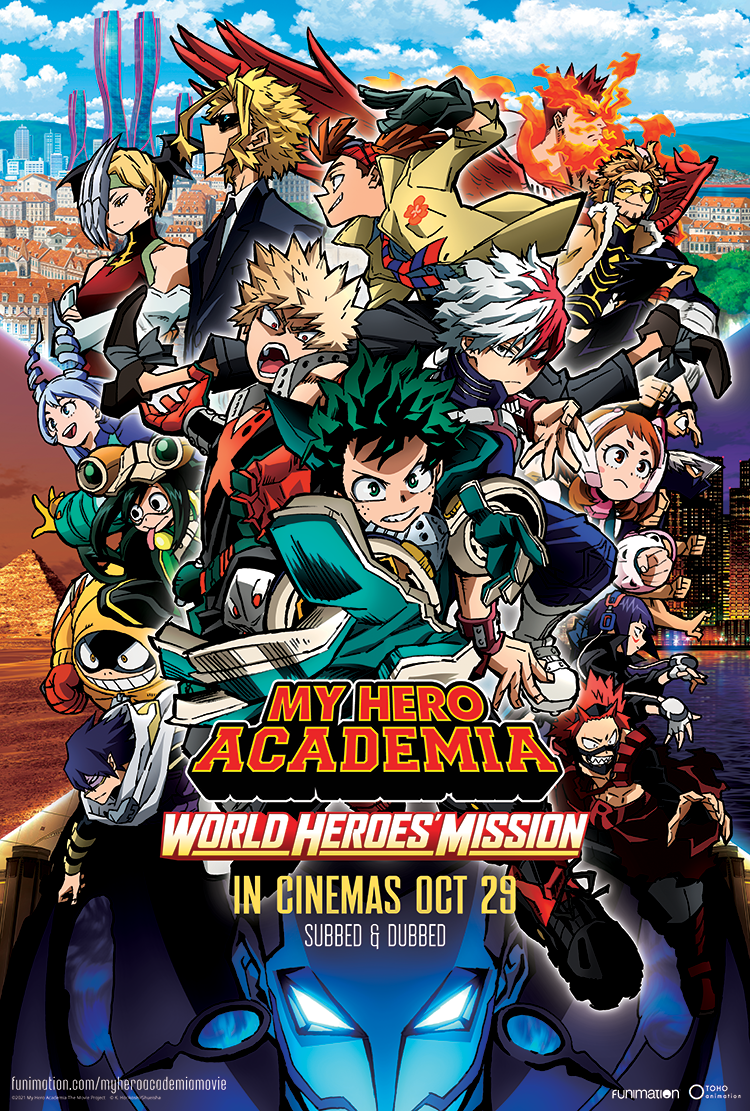 With five seasons done and dusted, a sixth announced, and now three movies, My Hero Academia is something of an unstoppable force in the world of anime. That’s not surprising because it’s a feel-good underdog story with superpowers, serving up fun, feels and thrills in equal measure.

If you’re not familiar with the MHA story, people start being born with ‘Quirks’, fantastical powers; some of which are insignificant, while others are truly astonishing. With the majority of the earth’s population empowered with Quirks, heroes and villains rise. The show focuses on Izuku Midoriya, aka Deku. Hero-obsessed but born Quirk-less, his life changes when he inherits the One For All Quirk from his idol and legendary hero, All Might. MHA follows his and his friends’ adventures as their powers grow and they fight to save the world from super villain-sized threats.

The latest feature film addition to the franchise, My Hero Academia: World Heroes’ Mission was released part-way through season five in Japan and is now getting its worldwide release. Unless you are five seasons and two movies deep into the MHA story, you won’t have a clue what’s going on, and you probably won’t care, either. A terrorist organisation named Humarise is planning to eradicate all those born with powers. Believing they will bring about the end of humanity, they plan on leaving just the Quirk-less behind, and it’s up to MHA‘s massive roster of heroes to save the world once again.

Except, for most of the film, there isn’t a whole lot of that going on. If you’re hoping to see your MHA favourites in action, then you’re going to be largely disappointed. Instead, the bulk of the story is taken up by Deku being caught up with small-time crook Rody Soul, being framed for a crime he didn’t commit, and the two of them going on the run. As a result of that, the film feels pretty slow and long with its 104-minute runtime. But, you can always count on MHA to serve up something spectacular, and while World Heroes’ Mission takes its sweet time, it definitely delivers a finale worth sticking around for.

Once the action arrives, it comes on thick and fast, and there are some stunning sequences positively dripping in sakuga. The fights are full-on and flashy, delivering the kind of scenery-smashing impacts that anime has always been about. Also, if you don’t still get goosebumps hearing Deku shout “Go Beyond… Plus Ultra!” while You Say Run plays in the background, well, you should probably just give up on anime.

Throw in some sentimental scenes that tug at the heartstrings, and you’ve got a movie that, while it doesn’t do anything new with the tried-and-tested MHA formula, knows what it’s doing well enough.

My Hero Academia: World Heroes’ Mission isn’t essential viewing, and its pacing leaves plenty to be desired, but it knows how to give its fans what they want, and it certainly put a smile on our face.

My Hero Academia: World Heroes’ Mission is in cinemas from Friday 29 October.