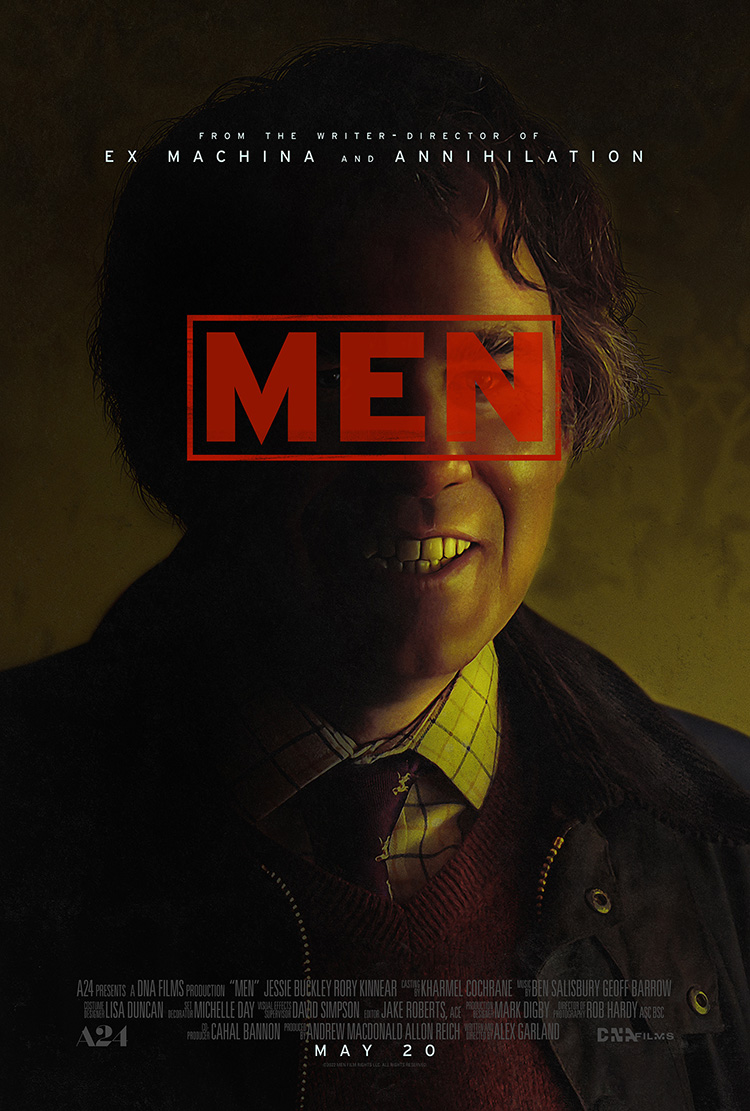 Alex Garland’s Men shares DNA with David Bruckner’s recent Rebecca Hall-led The Night House. Both see widowed women navigating an isolated haunted house, each also concerned with the fallout of a husband’s suicide, that trauma weaved into the thematic underpinning.

But while Hall’s character is plagued in her own home, Men’s Harper (Jessie Buckley) is on a solo vacation in the English countryside. Another crucial difference: The Night House’s instigating suicide is presented as sudden, but in Men, Harper both witnesses husband James’ (Paapa Essiedu) apparent jump from their building and is explicitly told he’ll take his own life if they divorce, in an explosive flashback confrontation involving assault – where cinematographer Rob Hardy lights their apartment in appropriately fiery hues.

Harper’s plagued by horrors in her mind and is soon enough physically plagued. After meeting the holiday home’s eccentric though relatively benign owner, Geoffrey (Rory Kinnear), nearby woods exploration triggers stalking by a nude man (also Kinnear), who tries entering the house. From then, every onscreen man – from a policeman to a spiteful teenager – has Kinnear’s face.

This isn’t a doppelgänger tale per se, as Harper never clearly acknowledges that every local male presence has the same visage. Kinnear’s (roughly) ten characters each personify different aspects of male aggression, from potentially unconscious belittling language to perceived entitlement to both a woman’s time and body. Most are explicit physical threats in the second hour’s home invasion, as Buckley fights these figures, one of which is apparently a manifestation of the Green Man myth.

Garland’s trademark opacity as writer-director is at its peak in Men, but the back half certainly delivers on visceral body horror – one sequence simultaneously evokes both Takashi Miike’s Gozu and Neil Jordan’s The Company of Wolves. That said, for whatever practical effects may have been used, an evident CG-aided sheen drains some of the images’ tactility and impact.

Men will be released in cinemas on 1 June.

Snake Eyes: G.I. Joe Origins: If only this was as good as the Nic Cage flick

Eternals: No hope for humanity?
< Previous
Next >

Snake Eyes: G.I. Joe Origins: If only this was as good as the Nic Cage flick

Eternals: No hope for humanity?