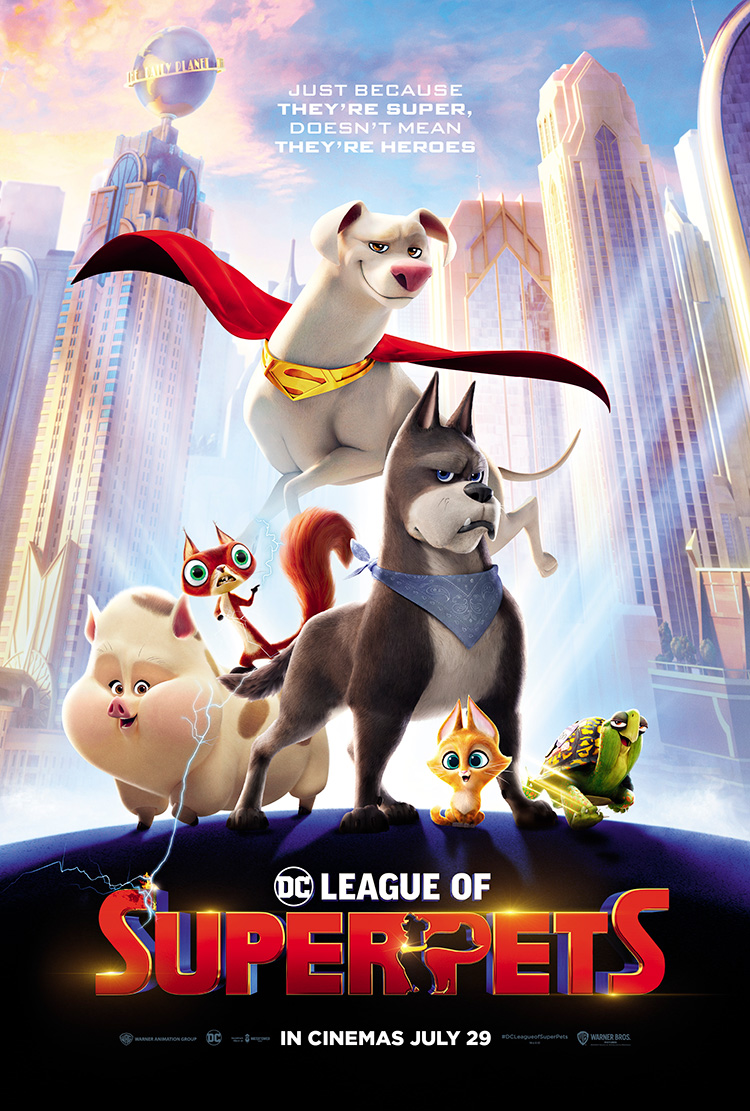 On paper this probably sounded like a surefire winner. Unfortunately, on screen the end result is significantly less than the sum of its parts.

So far, so Incredibles, but then the picture unwisely pivots away from this rather sweet, yet unoriginal set up into a tired Odd Couple-style riff between the optimistic Krypto and the decidedly gruff Ace, the Bat-Hound (Kevin Hart).

Parallel to Krypto and Ace’s perfunctory Oscar and Felix routine, we’re also introduced to a whole raft of other super-powered animals. Handily gifted abilities by a fragment of orange Kryptonite, their mission (apart from selling a ton of merchandise for Warner Brothers!) is to free the captured Justice League from the clutches of evil slaphead, Lex Luthor (Marc Maron) and his super-powered hairless guinea pig, Lulu (Kate McKinnon).

Aimed squarely at the under-10s, this animated feature contains very little of the wit and energy seen in the recent Lego Batman Movie, while attempts to mine the more archetypal side of the material clash with the scatalogical humour that the creatives are clearly far more enamoured by. This tonal conflict is never resolved and is embodied in the bizarre form of Merton (Natasha Lyonne), a short-sighted, geriatric tortoise with super speed who seemingly possesses the only potty mouth in Metropolis.

However, despite the by-the-numbers plot and jokes that never quite hit the mark, there are some bright spots. McKinnon’s Lulu is easily the best thing in the film, channelling a genuine sense of madness and absurdity that’s reminiscent of the WB’s ‘Pinky & The Brain’, while Keanu Reeves’ brief turn as a ludicrously moody Batman has more than a hint of Adam West’s droll humour to it. The animation is also suitably impressive, with Superman in particular looking and sounding more heroic and engaging than he’s appeared in years. Here’s hoping the next time the Man Of Steel returns to our screen he leaves the dog in the kennel.

Last Night In Soho Review: Where the neon lights are much brighter
< Previous
Next >