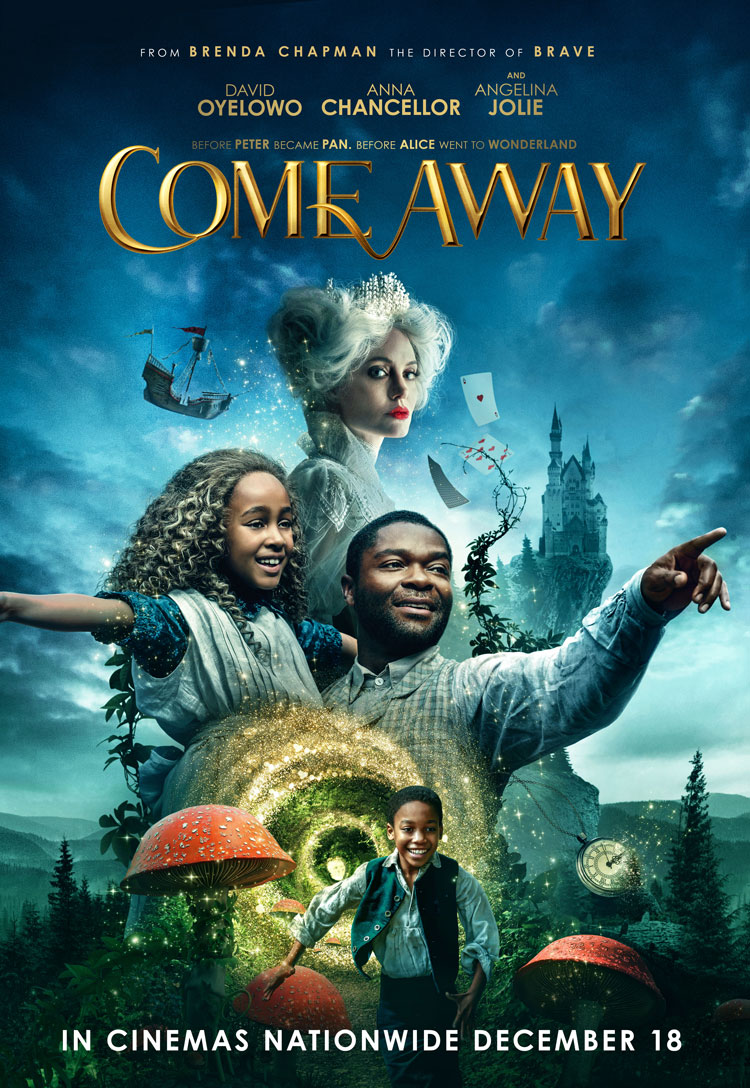 In Come Away, we’re introduced to a humble family of five living in the English countryside, complete with supportive parents Rose (Angelina Jolie) and Jack (David Oyelowo), along with their three children David, Peter and Alice.

Billed as a ‘fantasy adventure’, Come Away does indeed bring a fantastical element when we see the kids using their imaginations whilst playing in the woods, being inspired by the tales of Peter Pan and Alice in Wonderland. However, following the tragic and confusingly abrupt death of eldest son David, the family is left broken and struggle to pick up the pieces.

Although it would have been predictable, we fully expected the children to take a deep dive into their respective fantasy realms at this devastating turning point and for the mood to get a much-needed injection of positivity. Instead, the plot seems to fall down an overwhelmingly depressing rabbit hole that it can’t seem to climb its way out of, with themes of addiction and violence worming their way to the fore.

The children only seem to be drip-fed moments of relief, before quite literally being slapped around the face and forced to deal with their harsh realities. Sadly, once the lighter, fantastical elements finally come into focus in the final third of the movie, it all feels a little too late to save itself from the gloomy mess the story finds itself in.

Despite Come Away being her first solo outing into live-action directing, Brenda Chapman has plenty of experience with children’s films, co-directing both Pixar’s Brave (which she also co-wrote) and the animated musical drama The Prince of Egypt. However, even though Come Away has a PG rating, it can’t quite seem to find a similarly young target audience. It’s all far too depressing for kids to really get on board and even adults will struggle with the hefty themes.

Despite all the aforementioned gripes, it’s only fair to give a mention to the movie’s decent production value, with some genuinely wonderful scenes to marvel at. It also has a delightful soundtrack from Academy Award nominee John Debney.

With the above attributes, plus a plethora of great actors (Michael Caine and Derek Jacobi also co-star) at its disposal, as well as a potentially interesting concept of escaping the hard reality of real-life by delving into a rich fantasy world (something we could all understand right now), it’s a shame that Come Away is wasted in favour of depressing melodrama.

Come Away is in Cinemas from 18th December