Gina Meyer, the hero of my new supernatural spy comic, Shadow Service, is the culmination of my lifelong obsession with occult detectives and magical investigators. Co-created with incredible artist Corin Howell, Gina is a young witch who uses her powers (and her relationship with a sarcastic talking rat) to find missing people on the streets of London, a precarious business that brings her onto the radar of Britain’s very own occult security service, known in the trade as MI666.

To celebrate the release of volume one of the series, which collects issues one to five in one handy package, SciFiNow+ asked me to list my five favourite supernatural detectives, each of which have influenced the creation of Gina and the shadowy organisation that has her in its sights. As you might expect from a Brit, my choices are maybe a little anglo-centric, but hey, this sceptred isle of ours is steeped in magic and ghosts. It’s in our bones… 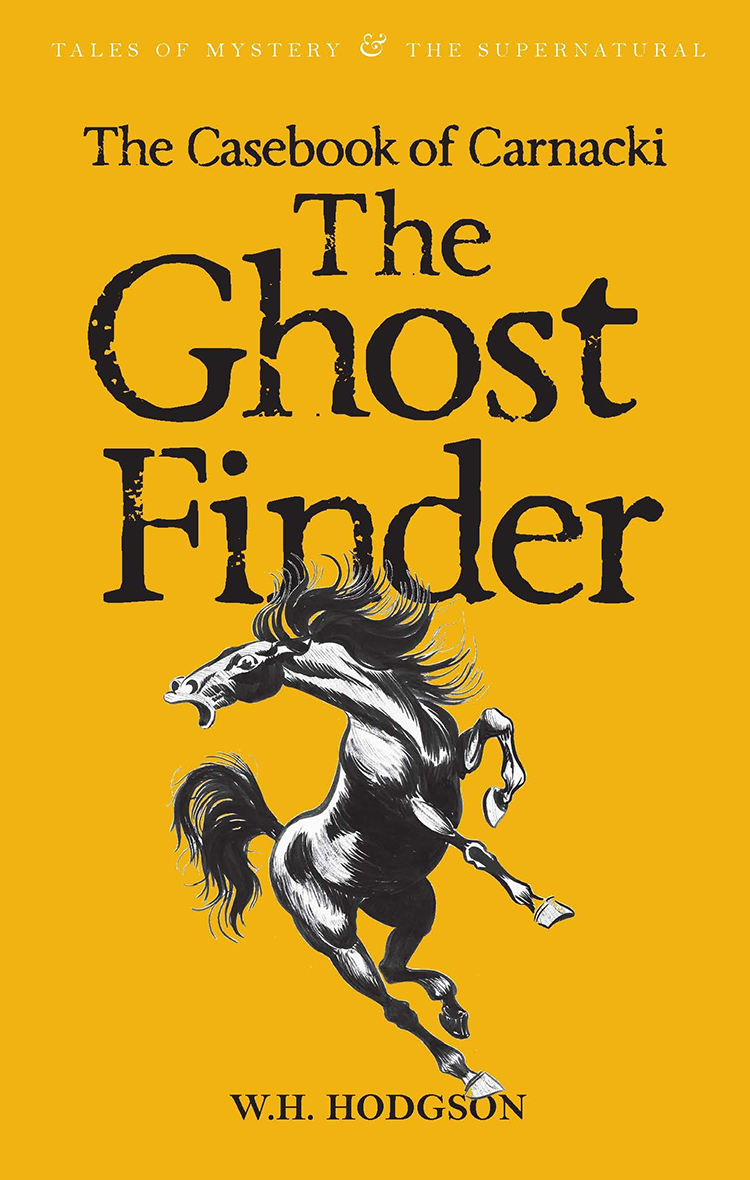 Less known these days than he should be, Thomas Carnacki was created by English writer William Hope Hodgson. First appearing in the Idler magazine in 1910, the Ghost Finder was the subject of nine short stories that followed a set pattern. The detective ­– who lived at 427 Cheyne Walk, Chelsea – would invite a group of friends around for dinner, regale them with one of his cases before booting them out onto the Embankment with a cheerful cry of ‘out you go!’.

What is interesting is that going into the stories you have no idea if a genuine spook is behind the haunting or if the ghost is a hoax, swiftly rebuffed with rationality worthy of Sherlock Holmes. Sometimes the spectres turn out to be downright human, where at other times there’s no denying the supernatural nature of the souls trapped in Carnacki’s trademark Electric Pentacle.

Not only has Carnacki influenced many writers over the years – including my pal and sometime collaborator George Mann with his Newbury & Hobbes mysteries ­­­– the Ghost Finder was also on my mind when I was creating Shadow Service. It’s no coincidence that MI666 headquarters is the imposing – and entirely fictional ­– Carnacki House! 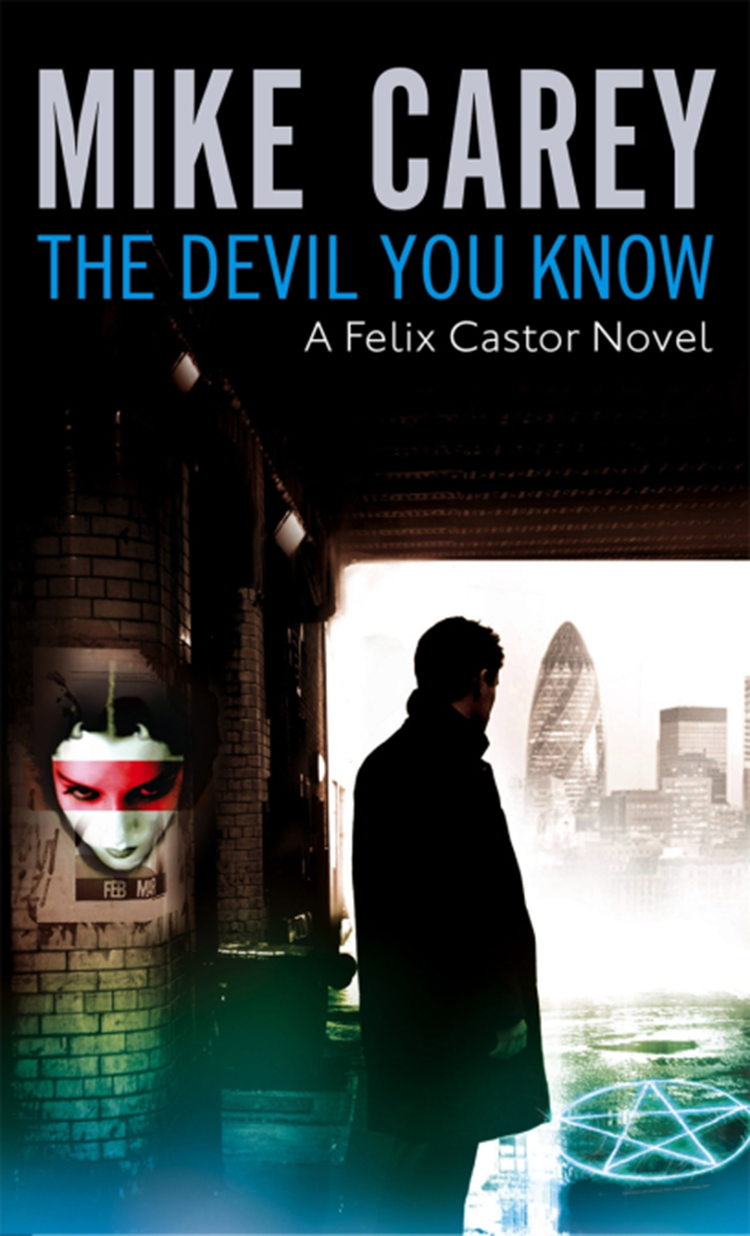 While Jim Butcher’s Harry Dresden is perhaps the king of supernatural PI appearing in 17 novels and a host of short stories, my personal favourite is Felix Castor, the hero of five supernatural thrillers by Mike Carey, more recently known for The Girl With All The Gifts.

The Castor novels, kicking off with The Devil You Know in 2006, were a major influence when writing Shadow Service, especially thanks to the British setting. Castor, a freelance exorcist, finds himself in increasing trouble as the denizens of hell tumble onto London’s sleaziest streets. Like my hero Gina, Castor is nearly always broke and haunted by a case that went disastrously wrong years before. He’s also a bit of a bastard. Full of quips and one-liners, I return to these books time and time again, and it’s a sin that Felix – or Fix to his friends (and quite a few enemies) – hasn’t made it to the silver screen! 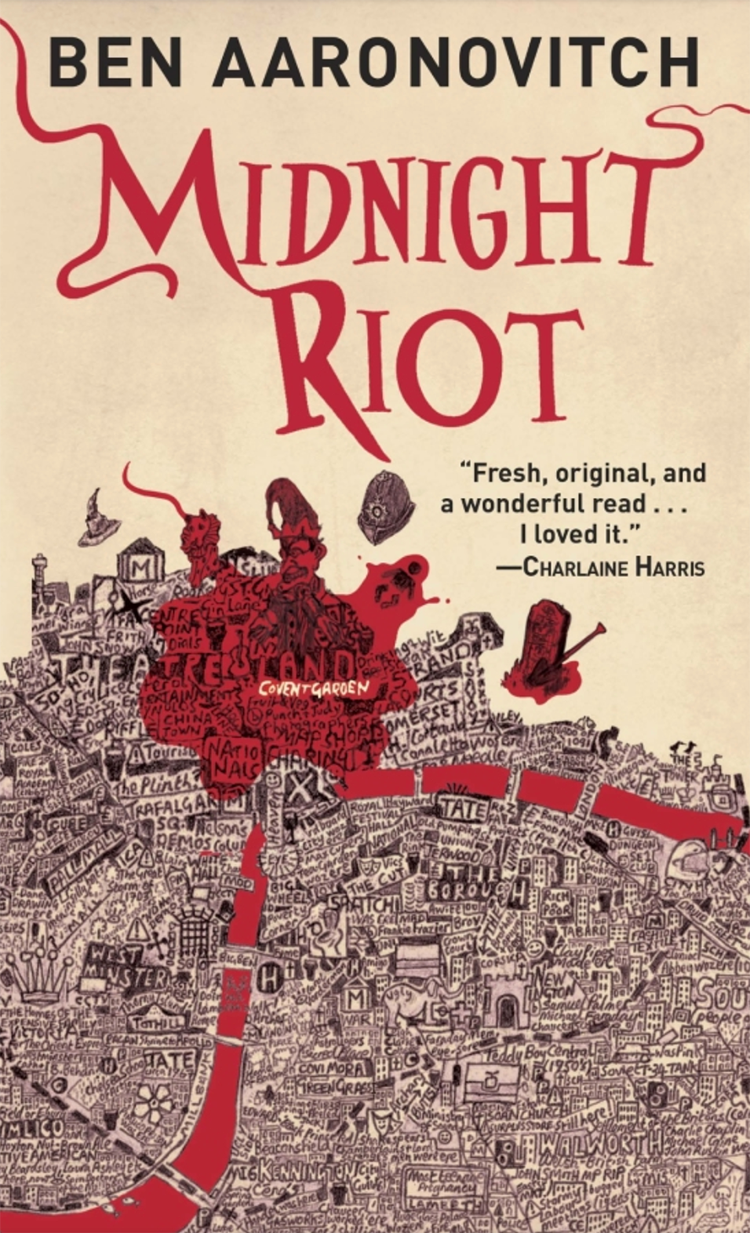 Yes, I know I mentioned Harry Dresden in the last entry and you’ll probably expect him to appear here in an entry of his own, but hey, what are lists like this if not a chance to have things thrown at you online?

While I’ve loved the Dresden books for years, they are blown out of the water for me by Ben Aaronovitch’s Peter Grant series which started with 2011’s Rivers of London. Yes, this is largely because I’m a Brit, but the way Aaronovitch weaves our green and not-so-pleasant folklore into Peter’s cases is nothing short of magical itself. What is also endlessly fascinating to me is the fact that unlike many characters on this list, Grant is not an amateur supernatural sleuth, but a professional copper working in the, admittedly small, Metropolitan police department that deals with bloodcurdling and ghostly goings on. While Harry Dresden is all about spectacle, and Felix Castor is all about the bleakness of the human condition, Peter Grant shows how an organisation deals with supernatural crime. Grant is also grounded, and in no way a bad boy; just a guy, who happens to be able to do magic, doing the best he can to bring occult wrongdoers to justice. He is repeatedly a breath of fresh air in a murky world. 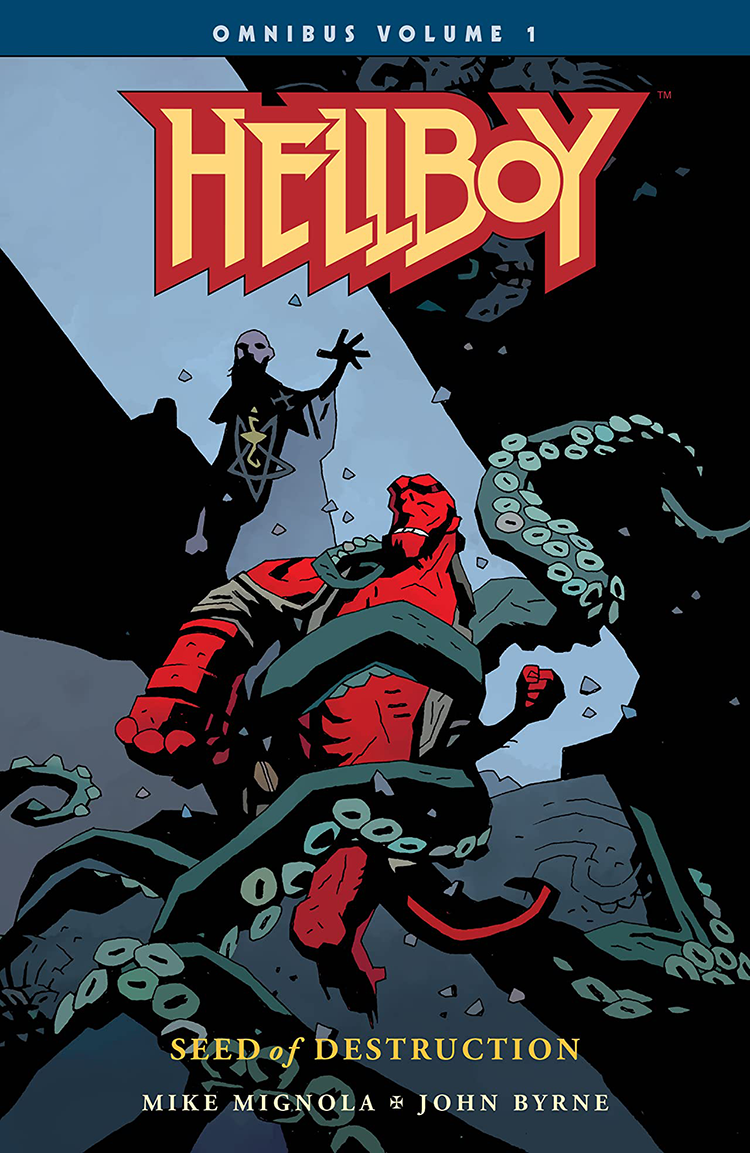 Most people know Mike Mignola’s red-skinned, horn-filing, humongous gun-wielding, pancake-eating monster-hunter from two incredible Guillermo Del Toro movies (and one reboot that has been quickly forgotten.) However, if you’ve never read the original comic books, then you are missing out.

As a member of the Bureau of Paranormal Research and Defence, Hellboy is definitely on the agent end of the Shadow Service spectrum, but he’s hardly ever undercover. Well, how could he be looking like that?

For me, there are two reasons to adore these stories. First and foremost is Mignola’s timeless art full of wide staring eyes and stark shading, but then there’s his deep love for mythology, which permeates every single case. From King Arthur to Baba Yaga, Hellboy tussles with witches, ghosts and demons from every culture and has even wielded Thor’s mystic hammer Mjöllnir in one of Christopher Golden’s novels illustrated by Mignola himself.

Aside from a fascination with folklore, Hellboy’s biggest influence on Shadow Service is the BPRD’s line-up of supernatural agents. The Bureau of Paranormal Research and Defence has fishman Abe Sapien, ectoplasmic Johann Kraus and Roger the Homunculus, while Shadow Service’s MI666 has Coyle, a cursed ghoul who is the very definition of ‘you are what you eat’, Aashi, a cold-hearted assassin who never misses and Hex, the agency’s sinister spy-master who definitely isn’t as young as he looks. 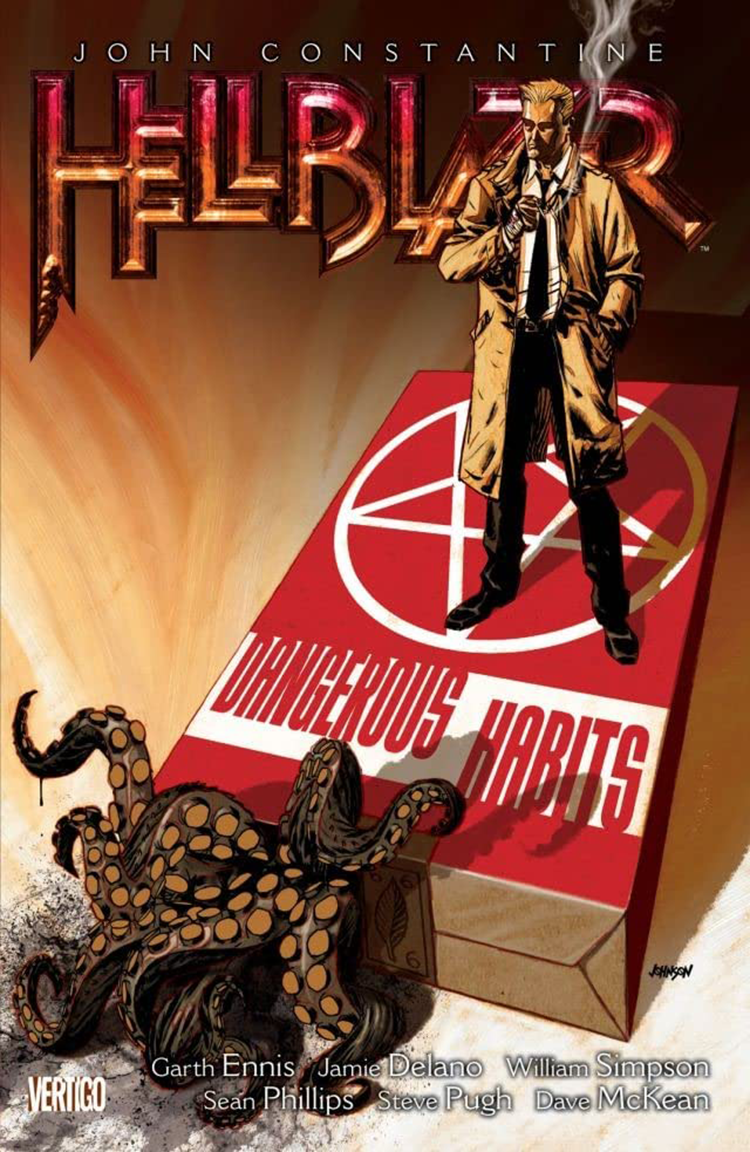 It’s impossible to write smart-talking occult detectives without invoking DC Comics’ anti-social anti-hero, John Constantine. Created by Swamp Thing writer Alan Moore after artists Steve Bissette and John Totleben were asked to draw a character that looked a bit like Sting, Constantine soon became a favourite with readers, especially after it became clear that his moral compass wasn’t so much off centre as completely absent.

A powerful sorcerer and hopelessly self-destructive, the joy of Constantine – aside from his many grifts and cynical life views – is that he’s undeniably working class. I love that DC Comics’ most powerful spell-caster isn’t a sorcerer supreme or a god-like being, but a guy who, more often than not, uses his street-smarts to defeat his enemies, writing himself off as an occult dabbler rather than a master magician. A loner seemingly unable to save loved ones, Constantine came out as bisexual back in ’92 and, up-to-recently, aged in real-time in a comic world where the Man of Steel always seems to be a man in his thirties.

After 30 years, John’s back catalogue may be daunting for new readers, but you won’t go wrong if you pick up the Garth Ennis scripted Dangerous Habits arc from Hellblazer issues 41-46. The classic story, with art by Will Simpson, sees Constantine facing his own mortality and was (very loosely) the basis for the Keanu Reeves’ movie.