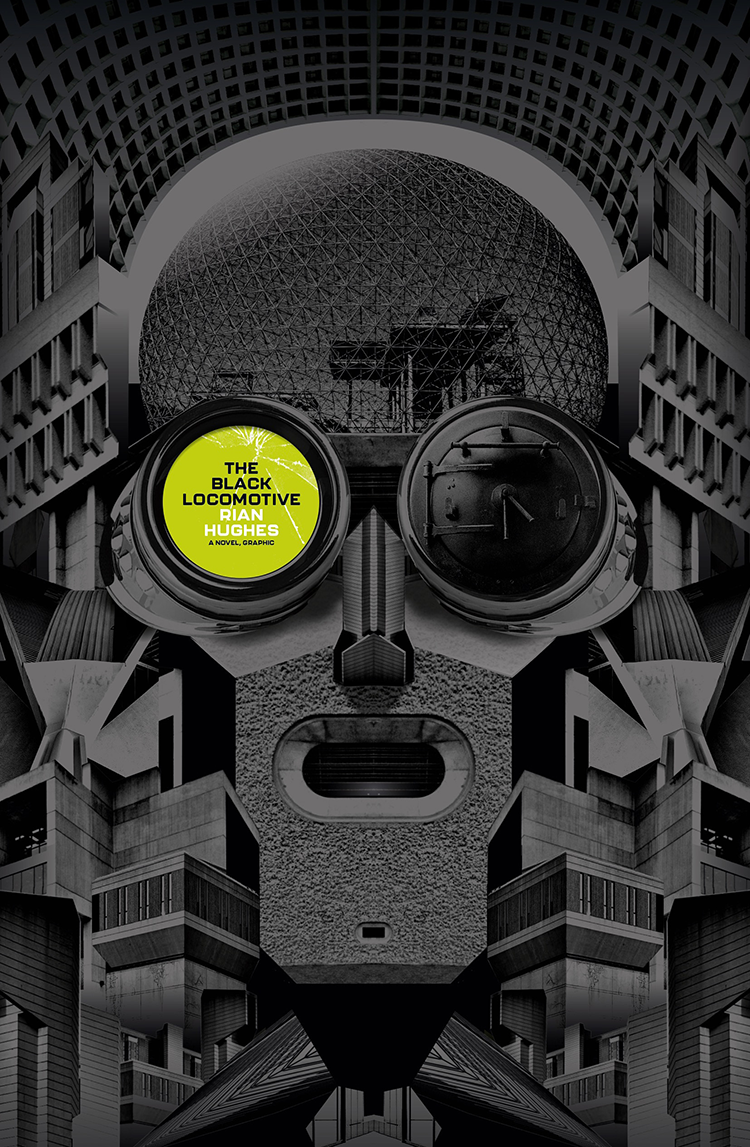 When Rian Hughes brought us his first ‘novel, graphic’, XX last year (read the review here) we were treated to a new format of storytelling; a book where fonts morphed throughout as a way to embellish the way the tale was understood. It was a novel concept that managed to sidestep the risk of being a gimmick and instead provided genuine new layers to the method of storytelling. Now, Hughes is back again with The Black Locomotive, another ‘novel, graphic’ that is considerably shorter but still plays with fonts and layouts to create a deep and well-engineered sci-fi.

Austin Arnold is in charge of the tunnel boring phase of London’s Crossrail project, though much to his chagrin he must also act as a tour guide for the project’s resident artist, Rutherford, who has been employed to provide good PR for the perpetually delayed project.

During the daily excavations, yet another new discovery is unearthed, though this time it’s not Roman ruins or the bones of kings and dinosaurs but an enormous chamber, deep below the surface of London. Its construction ancient and its purpose enigmatic…

While the team of methodical engineers and scientists start to investigate, Austin’s charge, Rutherford, decides to go exploring, inadvertently trapping himself within the structure and locking the door behind him. To make matters worse, since the discovery, every electronic device in London has stopped working. While the government suspects an EMP attack from a foreign power, Austin knows the truth could be even scarier. Fortunately, he has a plan and it involves his old club of steam train enthusiasts.

Playing out the glorious romanticism of the golden age of steam and ingenuity set against a backdrop of science fiction’s promise of otherworldly potential and consequence, Hughes has crafted a central cast of characters that beautifully mirror each other, reflecting counterbalanced perceptions of the same world. Rutherford appears as an artist, a man desperately desiring to meld and immerse himself into every environment, challenged to translate emotion into static image. While Austin is an engineer, a man of action, who seeks to bend the world to his will with Brunellian gusto. What is comforting is the tender balance that is struck by portraying these two perspectives. They are not enemies but two sides of a coin, in love with both nature and edifice, each choosing to honour it with their own idiosyncratic sacrifice.

Hughes is an undeniably unique wordsmith with an enviable grasp on a thesaurus and a deep, well-researched understanding of technical jargon. His viscosity of language acts as a stimulus to action, invoking a pace that rattles with the click-a-clack of its titular hero. The creative choice to hallmark each character with a signature font adds unexpected nuance to characterisation. While in some instances it is employed as a shorthand to avoid and condense potentially bloated passages, it never feels detrimental or unintentional. It plays out more as a tasteful cinematic aside, there to prevent sluggish diversions into unnecessary backstory.

At the centre of The Black Locomotive lies an engineer’s heart, beating at the chest of the unknowable in an effort to understand and control the world, combined with an artist’s soul that desires not to reform but to reflect the ordinary beauty in (un)extraordinary achievements. You can’t help but see the reflection of the conflicted yet unified cognisance of a challenging and inventive author.

Although occasionally verbose in his penchant for overindulging in linguistic gymnastics, Hughes’ second novel manages to communicate an excited and passionate vision while holding fast to a nostalgic affinity that warms the bones of any would-be industrial revolutionary.

The Black Locomotive by Rian Hughes is out now from Picador Books.

To Sleep In A Sea Of Stars Review: In space no one can hear you dream

The Lady From The Black Lagoon: Hollywood Monsters and the Lost Legacy of Milicent Patrick

To Sleep In A Sea Of Stars Review: In space no one can hear you dream

The Lady From The Black Lagoon: Hollywood Monsters and the Lost Legacy of Milicent Patrick