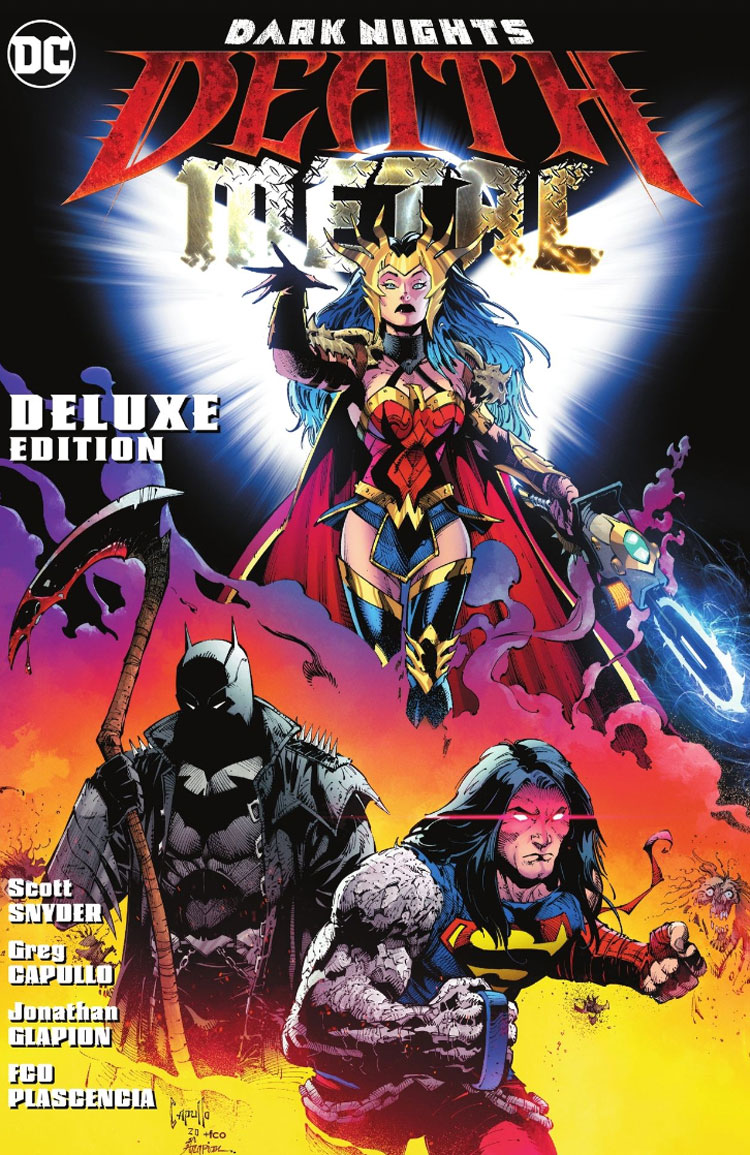 Back in 2017, the dynamic duo of Scott Snyder and Greg Capullo unleashed Dark Nights: Metal, a DC-wide crossover event that pitted the Justice league against Barbatos, God Of The Dark Multiverse. This adventure gave birth to a whole suite of twisted alternate reality Batmans, each one a corrupted version of a Batman who gave into his fears. The leader of them was The Batman Who Laughs, from a world where Batman killed the Joker and became consumed by his infectious insanity.

Its sequel, Dark Nights: Death Metal Deluxe Edition, which comprises all seven issues of the series released last year in one mind-bending graphic novel, brings us a conclusion to the story arc that started back with Geoff Johns’ Flashpoint, through to the New 52 and Rebirth.

Now that all that setup is out the way, let’s talk about one of the most devilishly daring stories DC have ever put out. Caution: there are some spoilers here but if you’ve read this far, you’re probably already on board.

Perpetua, creator of the Multiverse (and The Anti-Monitor’s mum), is displeased with her creation and has begun plans to restart her multiverse by taking over Prime Earth and eradicating the 52 other universes still in continuity. Aided by her second in command, The Batman Who Laughs, she’s already made good progress and there are only eight universes left. With Themyscira now literally Hell on Earth and Batman Prime dead, DC’s finest (including Dead-Batman) band together for a final showdown with the remaining members of a rag-tag Justice League and an army of Batmen, all fighting to bring balance to the universe; an Anti-Crisis event if you will.

For those who felt torn apart by Crisis On Infinite Earths back in the Eighties (you probably should be over it by now or at least talked it through with your therapist) or if you were affronted by DC’s New 52 relaunch in 2011, finally you can rest assured it all mattered. Everything you read happened, then it un-happened and now it’s re-happened. If that’s not enough to send you into your own personal multiverse of madness then stick around as things get super crazy. Witness Wonder Woman wielding an Invisible Chainsaw Of Truth, Superman riding a Cross Trainer/Inescapable-Murder-Machine (aren’t all cross trainers murder machines?) and discover a level of Bat-Branding not seen since the Sixties gave us Bat-Shark repellent with Batmansaurus Rex – a Batman who turned his body into a robot dinosaur. Yes, you read that right.

Taking all this on board, you can probably understand that it’s not an overstatement to claim that Dark Nights: Death Metal is insane, and if you’re a fan of the Snyderverse (no not that one, Scott Snyder’s multiverse… keep up) Death Metal is a triumph of puzzle solving. However, if you’re a casual reader just drawn in by the art (or let’s be honest, the title) there is a very high cost of entry to understand anything that’s going on here.

Death Metal is an achievement of galactic proportions and while it may not succeed in tying up every single loose thread ever, it gets away with it by showing just how much fun comics can be when you just go for it. And oh boy does artist Greg Capullo go for it, bringing a unique blend of the clean, heroic lines from his New 52 work, with the monstrous imagery he created with Todd Macfarlane on Spawn. Every single panel has clearly been crafted with care and creativity. No space has been wasted and each page exudes purpose, exploding in frenzied ostentation. We’d love to say we want to frame every page, but it would make for quite a disturbing gallery.

Snyder’s Death Metal clearly took a lot of investment from him and digesting his work demands the same of the reader if they are to get the most of the story. The reward, however, is a graphic novel that is fabulously ambitious and enticing. A superb swan song from a creative team that managed to knock down the house that DC built and cultivated a fertile earth on which its successors can build.

Dark Nights: Death Metal Deluxe Edition is out now. Order your copy here and check out the music video for it below…

One Day All This Will Be Yours Review: Time travel fun
< Previous
Next >

One Day All This Will Be Yours Review: Time travel fun