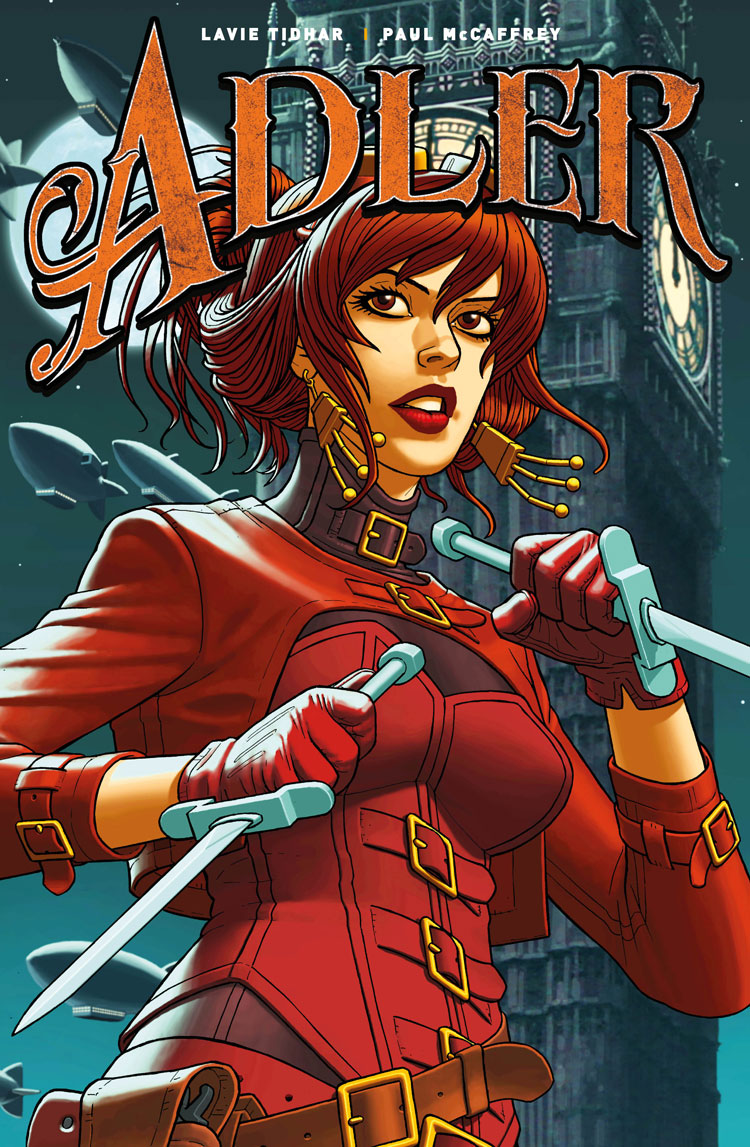 In Lavie Tidhar’s Adler, we follow a not-so-plain Jane Eyre as she returns to London from her time spent as an ambulance driver/nurse in the Boer War. A young woman with limited prospects (where have we read that before?), it is through a mutual acquaintance, Lady Havisham, that she soon finds herself sharing lodgings with the titular Irene Adler.

No sooner have the two women met than they are being shot at, with Adler herself being the target of an assassination attempt. Having quickly despatched the would-be-assailant, Jane and Adler are swiftly sucked into the murky world of London’s criminal underbelly, where a coup is underway.

Also returning to London is Ayesha, or ‘She-Who-Must-Be-Obeyed’ – the barbarian queen of a far-off land. She is there to exact her revenge on the British empire after refusing the invasion of colonial rule. It’s now up to Adler, Jane and their very own ‘league of extraordinary gentlewomen’ to try and stop Ayesha and save London…

Despite the slightly saturated steampunk aesthetic, fans of The Adventures of Sherlock Holmes will find themselves in comfortably familiar territory with Adler. Much like in Sir Arthur Conan Doyle’s own tales, Adler is the perfect proxy for Holmes, every inch his equal/superior. Her overconfidence is amusingly justified yet never falls into the arrogance of her male counterpart.

Jane, meanwhile, fulfils the role of Adler’s Watson, the courageous companion/biographer, though with decidedly more agency than Doyle’s doctor. A catalyst to adventure, Jane’s story, much like Charlotte Bronte’s classic from which the character is taken, is told from her point of view, with caption balloons setting up exposition as wistful recollection in a tone that feels both tongue-in-cheek and respectful of the original characters.

Packed with a who’s who of Victorian history and literature, and reading like some kind of Vic-Lit-Fan-Fic, Tidhar’s tale checks in on Sherlock favourites like Moriaty and Lestrade, while sharing the panels with historic homonyms of Marie Curie and even Queen Victoria herself. The rapid pacing of the story leaves you breathless from enjoyment, the exited bombast of explosion, gunfire, and murder is deliciously overt and there’s a unique thrill to seeing more modern sensibilities overlaid on classic figures. With this much adventuring, there’s an unavoidable lack of depth and complexity to the characters, but this isn’t the place for that and we’re content to just enjoy Lady Havisham as a blunderbus blasting badass.

The action is perhaps a stroke more brutal and visceral than anything Doyle ever gave us, made all the more dramatic thanks to artist Paul McCaffrey’s dynamic style, but it works well to really express a shadowy and dangerous alt-history London, complete with blimps (and let’s be honest, who doesn’t love to see a blimp?!).

There’s something of Buckaroo Banzai to Tidhar’s Adler, her day job giving little reasoning as to why she’d always be at the centre of the action. An opera-singing actress and adventurer, she’s a new kind of prima donna; a leading lady who is kicking ass and having a blast. Ridiculous and riveting, Adler is a (penny) dreadfully fabulous story of steampunk silliness.

Adler, written Lavie Tidhar and drawn by artist Paul McCaffrey is out now from Titan Comic. Win a copy of the book here.