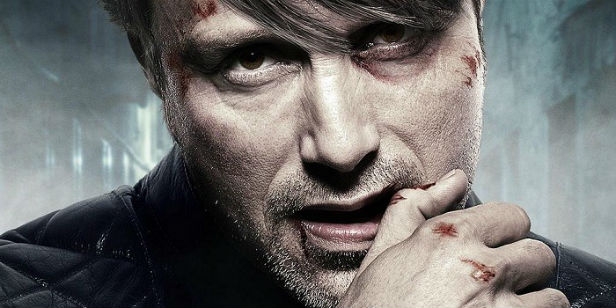 Huge, massive spoilers for the first half of Hannibal Season 3 below, up to ‘Digestivo.’ If you’re up to date on the UK broadcast, read on…

The news that NBC was not going to renew Hannibal came on 22 June, a few days after the third episode of the third season, ‘Secondo’, had aired. This was met with howls of dismay by the show’s devoted fanbase, but as many, including those who work on the series, have pointed out, the numbers don’t lie. Frankly, it’s amazing and wonderful that something as strange, disturbing and brilliant as Hannibal has been kept on the air as long as it has given such low viewing figures.

Those pesky low viewing figures may have prompted another showrunner to make some drastic changes to their show at the end of its second season, to significantly alter the personality of the series in order to entice those who might have otherwise been turned off. This was definitely not the case with Hannibal. Changes were made, but they only made the series darker, stranger and more daring. With the season’s first half concluded and the second, which will tackle Red Dragon, about to begin, we can now examine Hannibal’s Florentine adventures and the Incident At Muskrat Farm in detail.

It quickly became apparent that the first half of Hannibal Season Three, which can be simply summed up as “Will hunts Hannibal,” was going to see Fuller and his creative team push the boundaries of the show’s identity more than ever. From the gleeful, glorious opening episode which only features Hannibal and Bedelia murdering their way to a lovely Florentine apartment and a position at the Palazzo Capponi, it was clear that Fuller and co were doing exactly what they wanted to do.

Without the helpful narrative tool of the Hannibal/Will therapy sessions, the characters grew increasingly reflective, indulging in long discussions about their darkest desires and the nature of the good and evil instincts that drive them, and in some cases, became harder to like. Will’s relentless pursuit of Hannibal saw him shed most of his “awkward wounded faun” persona of the first season, building on the changes we saw in the second and becoming something more dangerous and unpredictable. It’s hard to imagine many other series’ leads forcing a character into a situation in which they had to murder someone, as he does with Chiyo (Tao Okamoto, excelling as the unreadable woman with the keys to Hannibal’s past) and the man she keeps in her basement in ‘Secondo.’ Not likeable, but certainly fascinating.

Hannibal, on the other hand, spends most of the first half of the season with his mask of humanity removed. With the exception of some dinner engagements and a couple of speeches given at the Palazzo Capponi, he’s a monster at leisure, free to play the piano, bathe “Mrs Fell” and enjoy every luxury the city and its history had to offer. It certainly felt like a change from what we were used to, the man who could work with the FBI, pretending to be something that he wasn’t.

Meanwhile, Fuller and his team pushed and pulled at the idea of what the show was at its core. It was easy to forget that it began life essentially as a police procedural, as Hannibal and Bedelia Du Maurier (Gillian Anderson, enjoying herself immensely) engaged in their Patricia Highsmith-esque murder games in Florentine high society with moments of incredible and often surprisingly broad comedy (Anderson’s reactions to the increasingly outrageous monstrosity in front of her are hilarious), while Will indulged in some occasionally obtuse monologuing before venturing into Hannibal’s past and a Lithuania that resembled a cross between Damien’s mother’s graveyard in The Omen and a Hammer Horror Castle Dracula. Harris’ novel Hannibal is an entertaining, overripe Gothic feast, and the series tore into that material and its possibilities with relish.

These swirling elements were at their most fevered in the aforementioned ‘Secondo,’ in which Will and Chiyo discuss what Hannibal has done to them, and Jack Crawford (Laurence Fishburne) arrives in Florence to talk about Lecter and Will with Inspector Rinaldo Pazzi (Fortunato Cerlino). It felt as though the characters were speaking in riddles, or at least getting as far away from the point as possible, with each concealing their true motivations. The hunt is postponed for discussions about what the hunt is really about. It’s what makes the episode’s final scene so delicious, as Hannibal and Bedelia discuss the inevitable arrival of Will Graham with the conclusion, “I have to eat him.”

Now, contrast these earlier episodes with the barnstorming mid-season finale that we’ve just seen. In fact, contrast it with the last three episodes. If the show felt like it was deliberately lost in a fog at the start of the season, it moved with deadly purpose at its end, showing us just how good it could be..

Tearing chunks out of the Hannibal novel’s plot and turning Caroline Dhavernas’ Alana Bloom from an unfortunate third wheel into one of the show’s most deadly, unpredictable characters (courtesy of a wonderfully icy new attitude and something to do with bone marrow), the episodes from ‘Aperitvo’ onward displayed a gruesome, wicked wit and tore through the final stages of the chase for Dr Lecter. Once Pazzi and his bowels were sent tumbling from the window of the Palazzo Capponi, the characters collided with force. Jack gives Hannibal the beating that’s been a long time coming, Chiyo glides through the background as a trench coated angel of death with a sniper rifle, Hannibal decides the only thing to do with Will is to eat his brains, and just when he’s got his bone saw in his friend’s skull, the corrupt Italian police department arrives to ship the pair of them off to Muskrat Farm, where Mason Verger (Joe Anderson) and his awful plans await.

Despite the frenzied energy and the incredible amount of action of these episodes, it never felt rushed. We met the grotesque Cordell (True Detective’s skin-crawling Glenn Fleshler) and learned of his skills as a surgeon, masseur and chef. We got reacquainted with Margot Verger (the superb Katharine Isabelle), whose relationship with Alana felt carefully considered (and beautifully played), and who finally found herself in the position to extract her revenge (and the ingredients for a Verger baby). There’s even a tender, moving send-off for Bella Crawford (Gina Torres), whose death leaves Jack with nothing left to lose (except Will, of course).

While the other characters find themselves questioning their own identities, Mason Verger is in doubt as to who he is and what he wants. Joe Anderson took over from the absent Michael Pitt and, despite more conspicuously channelling Gary Oldman, made the role his own. He’s a hideous creation, with a mask resembling that of The Nightmare Before Christmas’ Dr Finklestein, and his desire to eat Hannibal while wearing Will’s face is far less upsetting than his treatment of Margot. In amongst the grotesquerie of ‘Digestivo,’ the revelation of what he’s done with Margot’s eggs is the most outrageous, shocking and revolting moment of the season so far. So much so, in fact, that the revelation that she and Alana took a sperm sample from him with the help of a cattle prod is almost an air-punching moment of triumph.

Finally, there’s an understanding between Will and Hannibal. The moments of tender affection may have been few and far between through the first half of the season (although the look Lecter gives him when he arrives at the Uffizi Gallery is wonderfully sweet), but their relationship has always been the most fascinating element of the series. Dr Lecter may have decided that eating Will’s brains was the only possible resolution for the both of them, but with the drastic change in circumstances, of course he rescues his friend from Muskrat Farm. With Will’s subsequent insistence that their relationship is at an end, the only thing left for Hannibal to do is to turn himself in. He knows that there will come a time when Will will need to come back into his life. And he is prepared to wait.

And let’s not forget the incredible work of the show’s creative team; it remains the most handsome series on television. Special mention must go to brilliant cinematographer James Hawkinson, who made the shadows even deeper and darker, and director Vincenzo Natali, who did some of his best work in years on the four episodes he helmed. Then, of course, there’s the food, created by Janice Poon and José Andrés. From the snails feeding on pieces Doctor Abel Gideon (the still brilliant Eddie Izzard) to the Peking Duck-ed dream Hannibal (“Transubstantiation!”), it’s always a surprise and it’s always incredible.

With the characters undergoing such powerful identity crises, the choice to put the show through the same artistic journey was a bold one, but it’s one that paid off. We went with the characters through the dark corners of their psyches to emerge on the other side of something horrible, ready for the next chapter in the story.

A show like Hannibal doesn’t let Will Graham off with mere physical scars. He needed to get lost in the fog, and we needed to be there with him. It’s hard to imagine what this season would have been like if it had pursued a conventional chase narrative, bringing back the entire FBI team for a standard manhunt. How dreary would that have been? Hannibal took a big chance and, artistically speaking, it was a resounding success. There’s a sense of closure now. The fate of the show beyond this season is still undecided, but for now, a time jump and the Red Dragon await, and we couldn’t be more excited.

Hannibal airs on Wednesday nights on Sky Living in the UK. Keep up with the latest genre news with the new issue of SciFiNow.