Genevieve Cogman knows a thing or two about libraries. Her best-selling The Invisible Library series follows magical librarian-spy Irene on covert adventures to different times and realms, likened to Doctor Who and Sherlock.

But what is real research actually like?  Well, not as shown in the movies…

In a great many movies or books, there’s a scene where the protagonists realise that they need information, and rush to the relevant library – public or private – to research it. Cue a short montage of flipping pages or unrolling scrolls or data flashing down computer screens, and possibly an action scene with the bad guys choosing that moment to ambush them. A couple of minutes later in movie time, someone stabs a finger at a vital bit of information and cries, “Of course! Here’s what we need to know!”

Except, as anyone who’s ever had to research something in a real library knows, it’s not that easy. And when it comes to fictional libraries, it might be even harder . . . 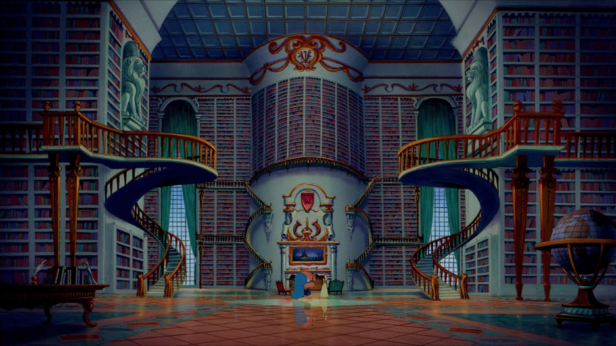 Personal Libraries – consider the Beast’s private library in Beauty And The Beast, which is glorious enough to send Belle into raptures. (In Robin McKinley’s book Beauty, the Beast’s library even contains books that haven’t been published yet – a very convenient thing for a magical library.) It would be a wonderful thing to be turned loose in a library like that just to enjoy one’s self – but how would you actually do any research?

Well, the books would be stored in some sort of order (by subject, and possibly by author), but also, a library of that period would probably have had a catalogue – a manuscript book or books containing the details of everything else in the library. New additions would be added in the margins. Clearly there’s scope here for a character that never got into the movies, the Library Catalogue, who could open up her pages so that Belle could choose a book . . .

Futuristic Libraries – more and more, computers are becoming part of library technology and the library experience. The computer databases and filing systems of a current library, and the huge computer banks and virtual reality of the future, can both help a researcher. The problem may be that there’s too much data and too many search results. A protagonist’s research may come down to asking the right question. (Where is the planet Kamino? Who created the mass relays? Who is the Doctor?)

Traditional Libraries – although the card catalogue only came into use in the late nineteenth century, protagonists from Indiana Jones to Sherlock Holmes have been flicking through them ever since. These libraries are often works of art, filmed – or written – using libraries that actually exist, with mosaics and frescoes and architecture as well as all the books they contain. But just because you have a card catalogue doesn’t mean that you’ve found your information. Researchers would need to actually sit down with the books – and if they’re old ones (the sort with hidden details about the Holy Grail, or a Secret Conspiracy or Hidden Treasure), then they won’t necessarily have an index.

Occasionally this sort of library will have hidden chambers where the really important books are stored. Important tip – don’t let the librarians catch you breaking holes in the floor to find them.

Horror Libraries – because Van Helsing needs somewhere to do his research. Whether it’s a protagonist from HP Lovecraft reading about horrors from beyond the imagination, or more current heroes looking up the history of places like Hill House or Castle Dracula, there’s a library which will have the books they need. Of course, it may not be friendly. The shadows will drape the corners of the ancient rooms, the card catalogue will creak and shudder, the books will lack indexes and need to be read all the way through, the librarians will be ominous figures of doom (admittedly that can happen in any library), and something nasty may be lurking behind the shelves. Don’t come here alone. Tell people where you were going. And be prepared to vanish, with your abandoned notes reading, “At last I know the truth! It is . . .”

Older libraries – consider the Library of Alexandria, or the library in The Name Of The Rose, or the Han Imperial Library, or other libraries in the distant past – real or fictional. Don’t expect a card catalogue: in places like the Royal Library of Ashurbanipal (7th century BC) the clay tablets and writing-boards were organised by shape and topic, and any researchers would have had to investigate by subject rather than by author. But who knows what treasures lie somewhere among the scrolls, the clay tablets, and the other ways that information has been recorded?

When we think about research in a library, we tend to imagine modern libraries – databases, indices, catalogues, organisation, and all the other ways that have been invented over the years to make it easier. But fictional libraries, present, past, and future, offer challenges to the researcher . . . and in the end, there’s no way to find the information you want except by sitting down and reading. 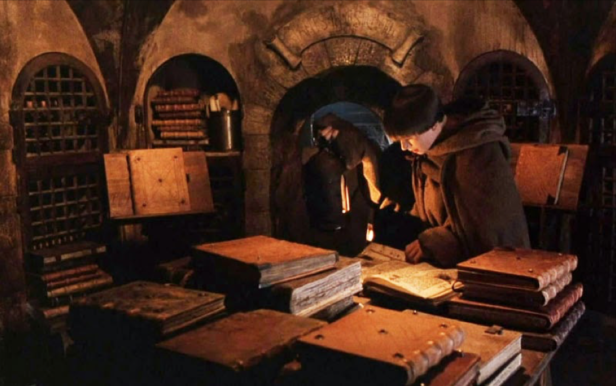 The Mortal Word is out now from Pan Macmillan.