The anime season of winter 2021 will forever be remembered as one of the most spectacular in recent memory. Not only did we have the continuation of modern masterpiece Attack On Titan and practically perfect shounen Jujutsu Kaisen from autumn, but we also had shows like the second half of the second season of the godly Re:Zero, the intriguing and unsettling Wonder Egg Priority, the simply fantastic Mushoku Tensei and the immensely entertaining So I’m A Spider.

We were all probably hoping that spring might be a little less stacked, purely so we could all take a little breather, but with 30 new anime and a total of 64 shows airing this season in total, there was little chance of that happening. If anything, it’s been even harder to try and pick just a handful of shows to focus our attention on and our viewing schedule seems even more intense than ever before.

Any new season is always a little intimidating and it’s often hard to know where to start but we’ve dived deep into the spring schedule and surfaced clutching five fantastic shows that we really think deserve your attention. With many spring 2021 shows only hitting their second or third episode, now is the perfect time to get stuck in without feeling like you’re being left behind and have to binge as if your life depends on it, so let’s get started! 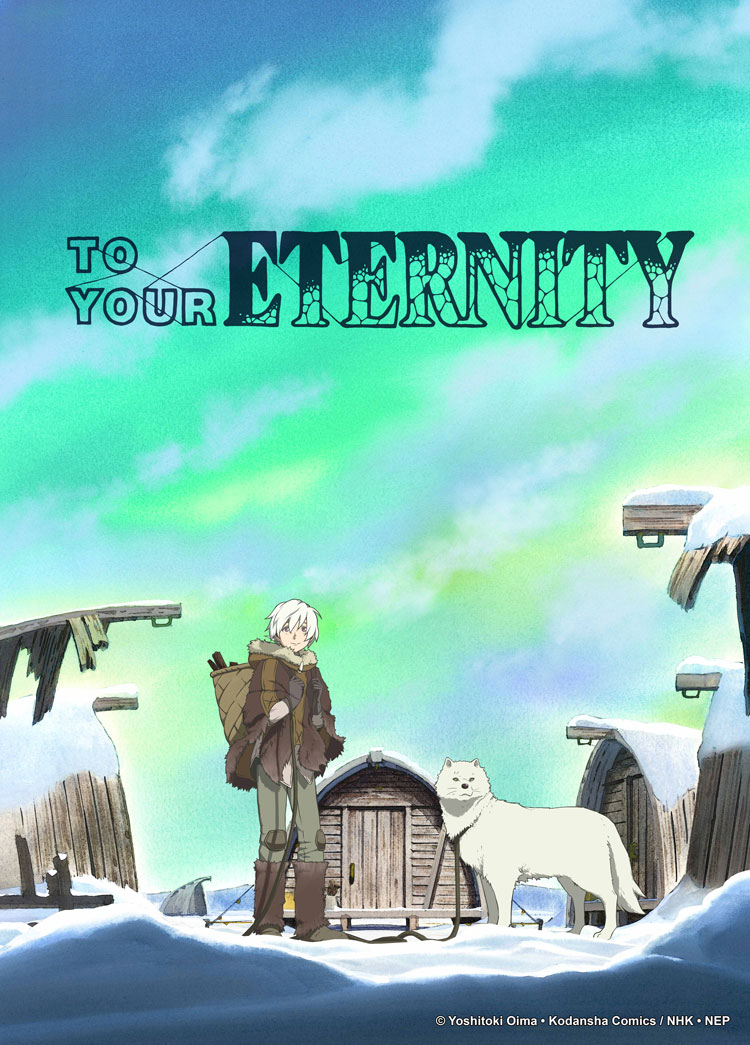 Arguably the most hyped show of the entire season, this manga adaptation has been awaited with bated breath by anime fans the world over. Manga readers had already warned us anime-only peeps to brace ourselves for an emotional journey like no other, and when the trailer dropped and hit us in the feels so hard we thought truck-kun had come to isekai us away to our new life, we could barely contain our excitement.

Thankfully, To Your Eternity does not disappoint and, after watching just one beautiful and absolutely gut-wrenching episode, we are 1000% in. The story follows a sentient, immortal orb, able to take the form of anything it interacts with, which is cast upon the earth – landing in a bleak snowscape it starts out as a rock and then takes the form of a dying wolf. The story really begins when it meets the wolf’s master, a boy called Fushi, and what follows promises to be an epic voyage of discovery that will have you questioning life and what it means to exist. It’s beautiful, deeply emotional and absolutely compelling. We simply cannot wait to see what kind of journey To Your Eternity takes us on – though we know it probably won’t be a happy one…

Why we love it: Epic emotional fantasy will leave your feels in tatters 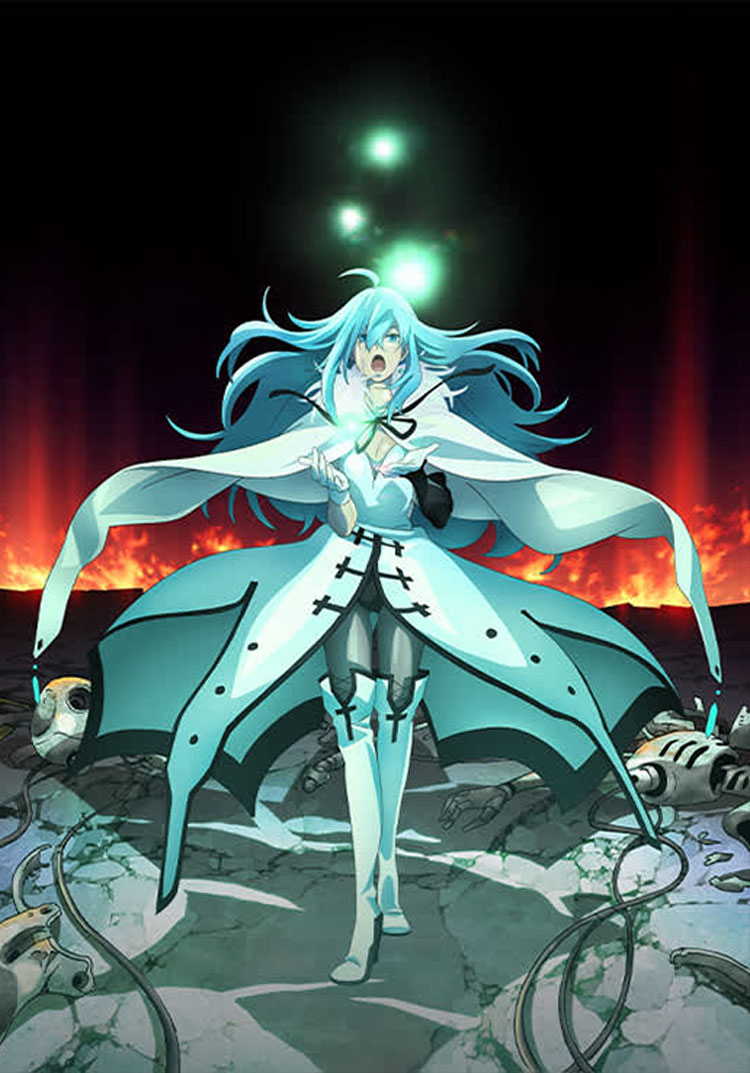 Real talk: we almost skipped Vivy because the synopsis just made it sound kind of meh. However, when we saw the buzz online, and we found out it was co-written by Re:Zero creator Tappei Nagatsuki and produced by Wit Studio, (Attack On Titan and Great Pretender), we figured it was worth our attention and, wow, were we glad we gave it a go.

One hundred years in the future, there is a brutal and bloody AI uprising and, in a desperate attempt to prevent it from happening, an AI named Matsumoto is sent back in time to find autonomous humanoid AI singer Diva, and together they must alter key events throughout the next century to try and change the future.

If that isn’t quite getting your heart racing then let us say this: Vivy is simply awesome. The first five minutes of the first episode had us shook and from that point on this show has soared to heights that we didn’t think were achievable in such a short space of time. Everything about it is just sensational: the style, the animation, the soundtrack and the emotion in its story – it ticks every box you could want it to. There are dazzling action sequences, awesome fight scenes, moments that will have you blubbing and it will keep you hanging on and desperate for the next episode. We literally paused the show more than once to shout to no one but ourselves about how good it is and we’re not even ashamed to admit that. We’ll be very surprised if Vivy doesn’t end up being our joint season favourite and even one of our favourite shows of 2021 – it’s just that good.

Why we love it: Time travel, a talking bear and singing. Also much ass-kicking 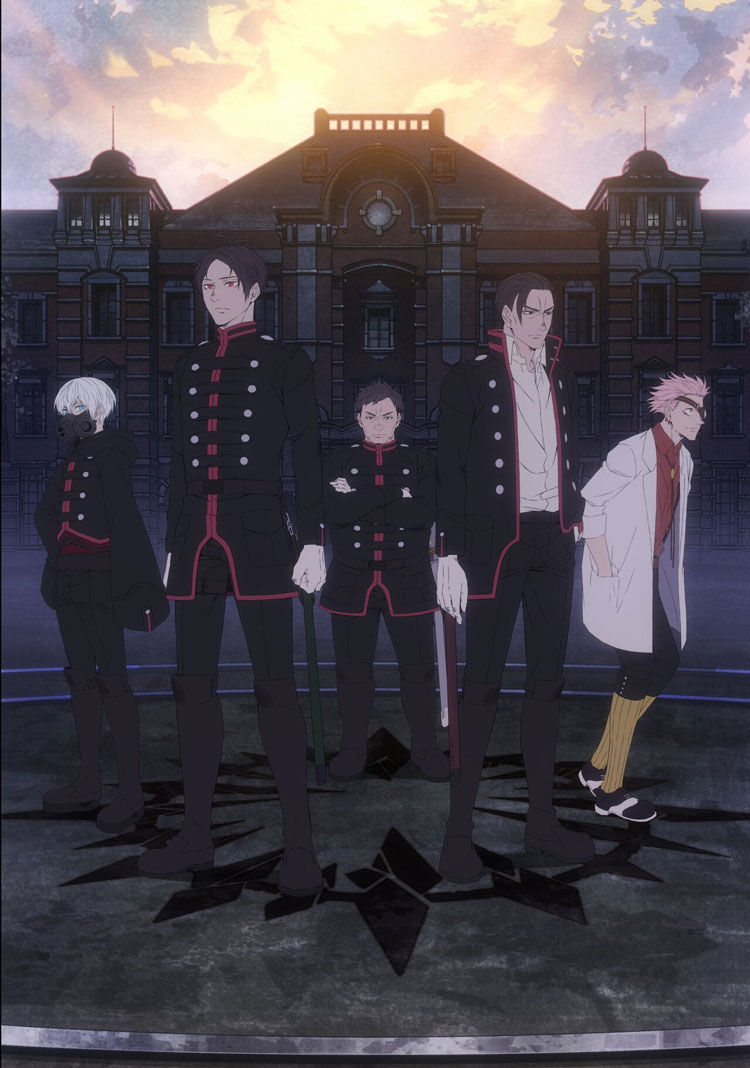 Japan. The year is 1923. Vampires have existed for some time but now their numbers are increasing and an artificial blood substitute called Ascra has appeared which is making them more dangerous and aggressive. The solution? Code Zero, an anti-vampire military squad, itself made up of vampires. Sounds like a slice of full-on, vamp-on-vamp shounen action that’s going to deliver non-stop slaying in a period setting, right? Well, it couldn’t be further removed from that.

Based on a play that was then adapted into a manga, Mars Red is actually an incredibly grown-up tale; a slow-paced, emotionally charged, mysterious and beautiful show that gets under your skin and refuses to leave you alone. It looks stunning, really quite unlike anything else, with a delicate colour palette and a style all of its own. It brings its world to life beautifully, further aided by its soul-stirring soundtrack.

This show is quite the slow burn. It’s dialogue-heavy, building up its story at a measured pace and, honestly, we love it for that – it feels like an intelligent anime and one that will be worth sticking with to see what secrets it reveals to those willing to give it their time. If that makes it sound dull, it’s really not because while the action scenes might be few and far between (so far at least), when they do happen they are intense, exciting and awesome.

Mars Red won’t be for everyone but we reckon it’s definitely worth a shot if you’re looking for something a bit different – plus the ED goes hard, so that’s a bonus too.

Why we love it: Slow-paced and thought-provoking vampire thriller 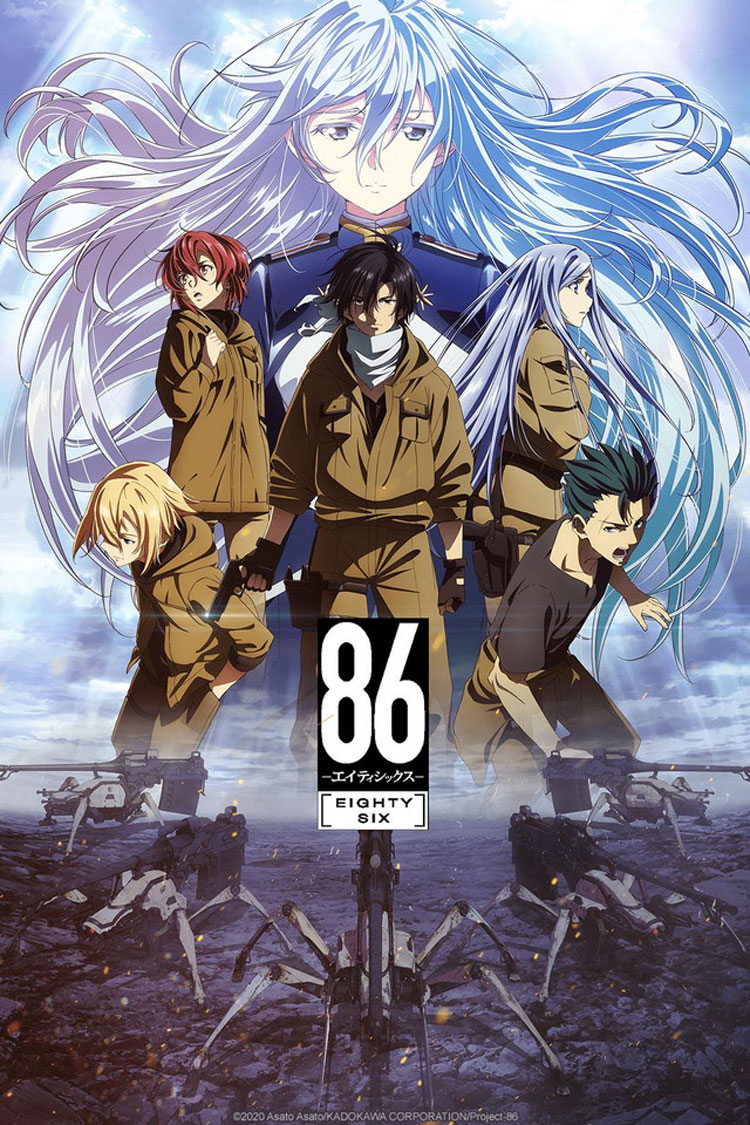 War rages between the Republic of San Magnolia and the neighbouring Empire of Giad, whose unmanned war machines, the Legion, almost decimated the Republic’s forces until it too launched its own unmanned drone counter-attack. Except San Magnolia’s four-legged, gun-wielding walking weapons of war aren’t actually unmanned at all. They’re piloted by the 86ers: humans stripped of rights and citizenship because they look different to the silver-haired, silver-eyed ruling Alba race. They are forced to live outside the safety of the world within the Republic’s walled 85 districts, and forced to fight in a war by a nation that refuses to acknowledge their existence, their deaths going uncounted by the news reports that the Republic proudly blinds its citizens with.

Major Vladilena Mirizé is determined that the truth is known and, in her role as a handler (a remote commander for squadrons of 86ers), is determined to treat her assigned soldiers as humans, and not as cannon fodder.

It’s a strong premise and 86 follows up on that by delivering a seriously solid and very grown-up mech show with enough interesting twists on the genre to keep things feeling fresh and exciting. It serves up spectacular action sequences, with top-tier animation courtesy of A-1 Pictures ensuring our eyes get a treat every week, while the soundtrack is suitably full-on and helps to make the battles feel even more intense.

But this isn’t just an all-out action anime. 86 also delivers everything you’d want from a futuristic drama, with a cast of characters that feel very real, plenty of tension and probably more than a few dark twists and turns as the series progresses. With its seamless blend of top-tier action sequences and a solid story packed with plenty of emotion and heart, 86 is an excellent mech anime that looks and feels fresh and different. This show definitely has our attention.

Why we love it: Bleak and gritty mech drama with heart 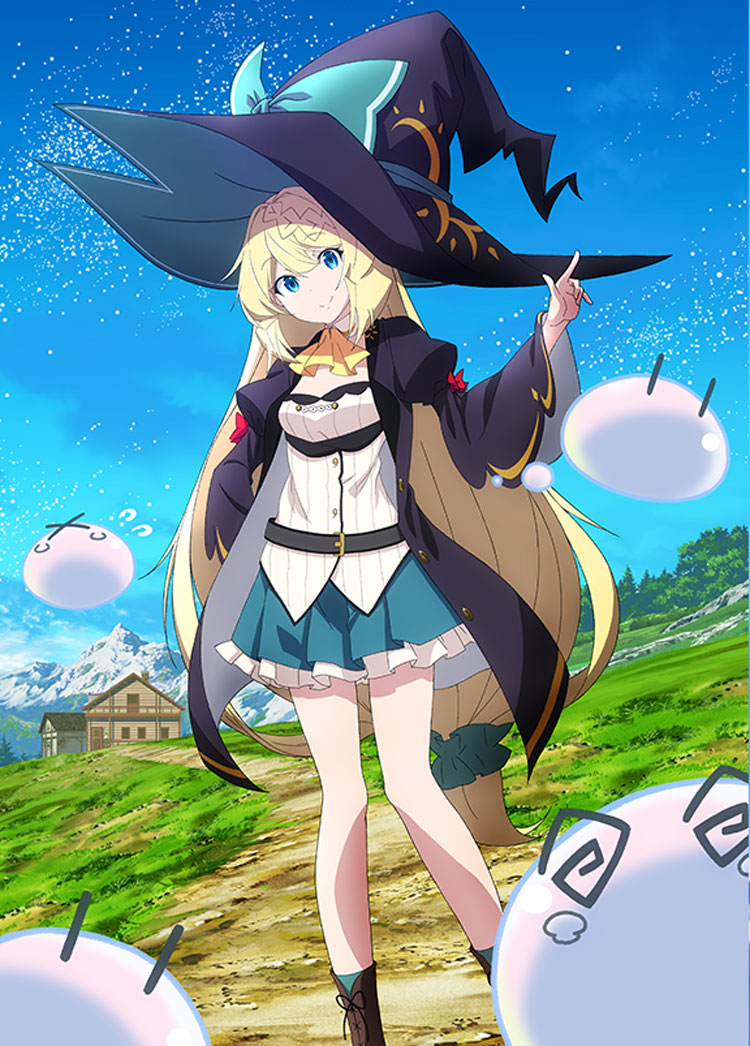 After your feels have taken a beating, your brain has been frazzled and your eyes feel like they’re about to melt from all the other shows on our list, you need a break. You need something that’s going to wrap you up in a cosy blanket, give you a big hug and stroke your hair while it whispers daijoubu in your ear – I’ve Been Killing Slimes is exactly that show.

It’s not going to win anime of the year or even anime of the season and it might possibly run out of steam before its 12-episode run is up but, right now, this lighter-than-light light novel adaptation is giving us exactly what we need on a Saturday afternoon: a big fat hit of sweet serotonin.

After dying at her desk from overwork aged just 27, corporate slave Azusa Aizawa meets god – who turns out to be a slightly sapphic lady – and is promised a new existence where she can live happily ever after. Thus, she finds herself reincarnated in a fantasy land as a cute, ageless, immortal witch and proceeds to spend the next 300 years living a life of leisure, only killing enough slimes every day to earn her keep. However, over 300 years all those little slimes add up to an awful lot of experience points and when word gets out that Azusa has hit level 99 and is now the strongest being in the land, everyone from adventurers to dragons wants to come and have a go to see if they’re hard enough. Spoiler alert: they’re not.

With her once peaceful life ruined, things suddenly start getting a lot more interesting and exciting for Aizawa and, you know what? We reckon she might just like it that way. I’ve Been Killing Slimes is so saccharine you’re going to need fillings after every episode but we wouldn’t have it any other way because this hilarious and heart-warming isekai slice-of-life is a sheer joy to watch. You know exactly what you’re getting with a show like this – a heaped helping of dumb fun that makes you giggle like an idiot, and sometimes that’s just what you need.

Why we love it: Slice-of-life isekai delivers lols by the truck-kun-load

Just The League: The Best Justice League Comics
< Previous
Next >